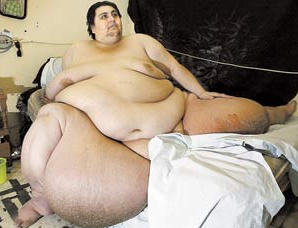 The fatter we become the greater our desire to blame that fatness on something —anything — other than eating too much and moving too little. The entire gazillion-dollar diet book industry is based on this premise and people keep buying the nonsense it offers notwithstanding that no book has ever made a dent on the obesity epidemic.

But diet gurus are just part of a massive industry that exploits our frailties. Others have blamed ”obesity genes” for our porked-out population, notwithstanding that the U.S. gene pool has barely changed during the massive girth growth of the last few decades. And never mind the mass of data indicating we just keep consuming more calories while almost certainly expending fewer.

Now researchers who have long been on the warpath against synthetic chemicals have ”discovered” that, after repeated and failed attempts to find these compounds guilty of everything from lowered sperm counts to shrunken alligator penises, these chemicals are the source of pot bellies and thunder thighs. They’ve prompted such headlines as ”Chemicals May Play Role in Rise in Obesity” (Washington Post), ”Exposure in the Womb to Certain Chemicals May Lead to Obesity” (The Economist) and ”Chemicals Could Be the Cause of Obesity” (The Telegraph of London).

Praise the Lord and pass the alimentation!

Leading the way is University of Missouri-Columbia biologist Frederick vom Saal, who has sought for much of his career to pin an evil tail on the industrial chemical donkey, especially one called bisphenol-A (BPA). About 2 billion pounds of BPA is used yearly in the U.S. to make coatings that line food and drink containers and plastics we drink from including baby bottles.

BPA is considered a weak estrogen agonist, which in English means that for better or ill it has the potential to affect our hormonal systems. Most hormones in our bodies, such as estradiol and testosterone, come from our glands. Some of us receive large doses in medicines like contraceptive pills or testosterone patches. After that comes exposure from plant foods (phytoestrogens), such as flax seed soy, garlic, olive oil, green beans, and corn. Finally, we get tiny amounts from synthetic chemicals like BPA.

Back in 1997 vom Saal published a rodent study in which he claimed two different extremely low doses of BPA given pregnant females caused prostate enlargement in offspring. It received tremendous attention because voluminous studies at much higher doses showed no ill effects from BPA and the best-known tenet of toxicology is ”the dose makes the poison.” Anything is poisonous at a high enough level; nothing is poisonous at a low enough level. Vom Saal’s findings stood that rule on its head, as if declaring children least exposed to sugar had the most cavities.

But vom Saal’s test groups comprised a pathetic seven mice apiece. Subsequent studies duplicating his techniques yet using many times more mice found no prostate enlargement; none had to pee in the middle of the night.

With over 500 rodent studies of BPA, almost all of which recorded weights, vom Saal could easily prove his point. Why hasn’t he?

Health agencies including the FDA, that of the European Union, Germany specifically, and Japan, have refused to rein in use of the chemical. The website of Germany’s version of the FDA, the BfR, declares: ”Following careful checking of all the studies, in particular those studies in the low dose range of bisphenol A, the BfR carried out a scientific assessment of the results and came to the conclusion that the presence of BPA in polycarbonate bottles poses no health risk to babies and infants during normal use.” (Emphasis added.)

Nevertheless, vom Saal become a darling of the media and environmentalists not because of his proof but because of his conclusions. So it matters not to them that he hasn’t actually published much of anything on the BPA-obesity link. A few published studies by others have shown theoretically how a hormone disruptor might lead to fatness but absolutely nothing more.

Going against this hypothesis are over 500 published studies of the effects of BPA on rodents. Routinely the animals in these are weighed. Finding a BPA-obesity link is as easy as getting a research assistant to spend a day going through these studies on the MedLine database. But that would produce facts, and facts must be ignored when they countervail a convenient theory.

This doesn’t get chemicals off the hook for causing obesity. All food is made of chemicals, whether natural or synthetic or both. Cut back on these and you’ll lose weight. That’s not exactly the message the synthetic chemical alarmists want to send, but it has the minor virtue of being true.