I’ve shown clearly that reporters are acting with reckless disregard for the truth in the Toyota sudden acceleration feeding frenzy since my Los Angeles Times article “Toyota Hysteria” on March 9. And no article showed that more than my Forbes.com expose, “The Toyota Hybrid Horror Hoax,” of March 12.

But are some reporters outright lying? One presumes so out of so large a number; but the charge is generally hard to prove because it requires showing a state of mind. You have to catch the reporter making clearly contradictory statements or show he clearly knew a set of facts and presented them otherwise — or failed to present them otherwise. That the person “Should have known better” isn’t enough. With that, I present my letters exchange with the San Jose Mercury News and specifically its automobile writer, Gary Richards. And you can draw your own conclusions.

In Forbes.com, March 12, “Toyota Hybrid Hysteria Hoax,” I exposed the alleged wild ride of James Sikes as a hoax. Everything he claimed was absurd, contradictory, or perhaps even physically impossible. Most devastating is that most of the evidence was available from the beginning and yet the media systematically ignored it. Gary Richards still does, ("Roadshow: Shifting a Prius into neutral is not easy," March 14.)

I went to a car dealer and sat in a Prius, whereas Richards merely relates news from his neighbor "Emmett." Writes Richards, "Alas, shifting a Prius into neutral is not as simple as with most models, as my neighbor Emmett discovered." Richards says a "traditional car shifts into neutral with one easy step. All you do is push the shift lever to the ’N’ position. But in the Prius Emmett found out, you must first push the shift lever to ’N,’ then hold it in that position and finally wait a second or two before the transmission shifts into neutral."

So it’s better to call the CHP [California Highway Patrol] than wait a second or two?

And why didn’t Emmett tell Richards this, or did he: While almost universally gear shifts are mounted on a console, in the 2008 Prius it’s mounted on the dash-expressly to allow shifting with both hands on the steering wheel.

In any event, we know Sikes never even tried to shift into neutral. He said so at a press conference the next day in El Cajon, available in its entirety on the Web. He also told that to CNN, again available on the Web. He told CNN he was afraid to shift because, “I was holding onto the steering wheel with both hands — 94 miles an hour in a Toyota Prius is fast.” Yet he had a cell phone in one hand most of the time and we know he didn’t have to remove a hand from the wheel to shift.

Richards also says Sikes "says he wasn’t aware of how to shift his Prius into neutral. Whether this was a hoax or not remains to be seen, but his statement is plausible." Is it truly plausible that a man has driven a car for two years and has never shifted it into neutral? This is the same incredible gullibility that led to the media buying into the Balloon Boy in a Prius in the first place.

The Mercury-News didn’t print it. They are not going to print it. Instead, the letters editor forwarded it to Richards, with the message "fyi ... this one is ALL yours :) 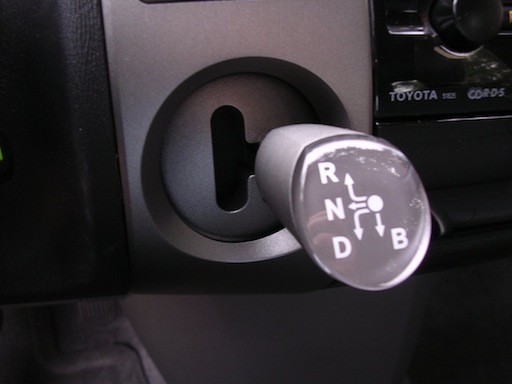 Richards claims, "Some [of his emailers] say they are looking at the dash and there it appears you should shift the lever to go into neutral UP and not left (which is the correct way)." Really? And they still have the brains to compose an e-mail?

Richards wrote to me:

Hi Michael. I did try shifting my Prius into neutral and I, and numerous others who have called or e-mailed me agree, it not easy at first. I’m talking not a few, not dozens, but maybe hundreds of people (I get about 600 e-mails a week with questions from readers). Why? Some say they are looking at the dash and there it appears you should shift the lever to go into neutral UP and not left (which is the correct way). These calls were coming in long before Mr. Sikes’ story.

First and least important, I can’t see how it’s even a matter of opinion about how easy it is to shift the Prius into neutral. As the attached photo shows, "N" is on the left. You shift left. Why anybody would think that the "N" being on the left means you should shift "up" is hard to conceive; but if you’ve made the mistake once you learn. Sikes said he’s owned this car two years. Do you honestly believe that in two years he’s never made the effort to shift into neutral? Not once?

Moreover, in your column this isn’t the explanation you gave for why "shifting a Prius into neutral is not as simple as with most models..." You stated, "in the Prius Emmett found out, you must first push the shift lever to ’N,’ then hold it in that position and finally wait a second or two before the transmission shifts into neutral."

Even were this true, it’s remarkable that waiting a second or two is somehow more difficult than pulling out a cell phone and talking for 20 minutes. But as it happens, it’s only true to the extent that no gear shifter engages the transmission instantly. There’s always a bit of time lag.

As my article, which got tremendous national and international attention and appeared six days before you column notes, there is a video on the web showing in several ways that the Sikes story was a fabrication. It was posted six days before your column appeared. At about 2:14 into the video the driver demonstrates that a simple shift to the left does the trick. At 2:48 you hear it being shifted into neutral with a quick click, but you don’t see it. At about 3:48 into the video you can watch the transmission shifted into neutral. It takes just a finger and it clicks into neutral in much less time than a normal automatic or manual transmission.

Second, and more important, this is all actually irrelevant because as I note in my piece, Sikes said over and over again that he never even tried to shift into neutral.

He said it at a televised press conference that took place and was Web-posted a full week before your column appeared and he told it to CNN on the same day. I discussed all this in my article, with hyperlinks to both the CNN transcript and the press conference. As I noted, Sikes told CNN, "I was afraid to try to [reach] over there and put it in neutral. I was holding onto the steering wheel with both hands — 94 miles an hour in a Toyota Prius is fast.”

The excuses Sikes gave at the press conference were equally unbelievable. Of a car he’s owned two years he says, he “hadn’t played with this kind of a transmission.”

You wrote Sikes "says he wasn’t aware of how to shift his Prius into neutral. Whether this was a hoax or not remains to be seen, but his statement is plausible."

After all this, do you still believe it? And if not, do you intend to correct the record?

That was nine days ago. He has not corrected the record. As I said, draw your own conclusions.