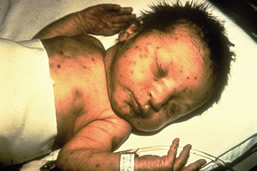 Rubella’s greatest danger is birth defects in the offspring of mothers carrying it such as this baby, mothers who may be infected by children who weren’t immunized.Organized international efforts to scare the living tar out of parents of small children have just been dealt a stunning setback with the retraction of an influential but fraudulent article in a major medical journal.

To the extent the retraction is publicized, it should prevent sickness and possible death in kids and help shove anti-vaccination groups back into the conspiracy theory cesspool from whence they arose.

The study appeared in1998 in Britain’s most prestigious medical journal, the Lancet. It implicated the measles- mumps-rubella vaccination (normally given at age 1) as the cause of an allegedly soaring increase in autism. This disorder primarily affects boys and often prompts constant rocking motions, though more importantly it prevents both verbal and non-verbal communication. It appears by the age of 4, though it may be diagnosed later.

When the Lancet piece appeared, new anti-vaccination groups popped up like toadstools after rain. (One just hired the disgraced lead author of the study, Dr. Andrew Wakefield.) Older ones such as the National Vaccine Information Center were reinvigorated. The sharks in suits, who get referrals from the center and its sisters, swarmed in to bite off hunks of flesh from vaccine producers and government compensation programs.

Predictably, fomented fear caused dropping MMR vaccination rates in some countries and parts of the United States. This in turn caused surges in cases of all three viral diseases, each of which is highly infectious and potentially fatal. A Colorado report in a December 2000 issue of the Journal of the American Medical Association found unvaccinated children had 22 times the rate of measles as vaccinated ones, even though by far most of the children around them had been immunized.

These data from New Zealand show the tremendous impact of childhood vaccinations.

Yet the Lancet study was at a glance science baloney. For example, it was based on a whopping total of 12 children. But the game wasn’t up until the Sunday Times of London reported that Wakefield had been receiving money from a lawyer who sues vaccine makers. In fact, several kids in the "study" were the lawyer’s clients. Further, long before the disavowal of the report, massive research was showing no vaccine-autism link. Sixteen different studies, some evaluating over half a million children, found no connection. Conversely a total of two tiny studies hinted at an association.

A third report asserting a link was based entirely on unverified reports by parents, and, according to the American Academy of Pediatrics, contains "numerous conceptual and scientific flaws, omissions of fact, inaccuracies, and misstatements." Little wonder that the co-authors are activists and consultants to trial lawyers.

Other childhood immunizations have also been targeted, especially those that used mercury-based thimerosal as a preservative. Yet again, the evidence of safety is overwhelming. One evaluation of all autistic children diagnosed in Denmark from 1971 to 2000 concluded, "The discontinuation of thimerosal-containing vaccines in Denmark in 1992 was followed by an INCREASE in the incidence of autism." (Emphasis added.) To assuage parents’ fears, thimerosal is no longer in any American children’s vaccines, but this simply prompted the alarmists and lawyers to shift even more of the blame for "skyrocketing rates" of autism onto MMR. Yet even the "skyrocket" is suspect.

Clearly autism diagnoses have increased dramatically, more than quadrupling in California from 1980 to 1994 with somewhat lesser increases in the UK and Denmark.

But after poring over medical evaluations from young male patients of more than 250 British doctors, Boston University researchers reported in December’s Pharmacotherapy that "In the early 1990s, boys with diagnosed developmental disorders were infrequently diagnosed with autism." Rather, awareness of the disease and changing diagnostic practices were probably "a major cause of the recent large increase."

Increased diagnoses without increased incidence are common. Would you believe not a single case of hepatitis C was diagnosed before 1989? It’s probably existed forever, but that was the year the virus was isolated and named.

If indeed there is more autism, a likely culprit is women having babies later than ever – something long associated with numerous birth defects. Another is the obesity epidemic. About 20 published studies have found that children from overweight moms, much less those who are outright obese, have higher rates of many types of birth defects. To point this out, of course, is to beg for a horsewhipping from feminists, fat activists, and trial lawyers.

But it remains that parents who do not vaccinate their children are not only putting them in harm’s way but also their children’s friends and classmates. As to those who frighten parents away from childhood vaccinations? They may have money in the pockets, but they have blood on their hands.