Back when I was in college, I attended a meeting of the local animal rights organization. When somebody asked the group leader about using animals for medical research she replied (and I’m not making this up) "Well, it’s our belief that people shouldn’t get sick, in which case there would be no need for animal testing."

Such awesome smugness is actually par for the course for these people. Consider the following statements from Ingrid Newkirk, co-founder and vice-president of People for Ethical Treatment of Animals (PETA), the largest animal rights organization.

And here’s the kicker: "Six million people died in concentration camps," she told the Washington Post, "but six billion broiler chickens will die this year in slaughter houses." 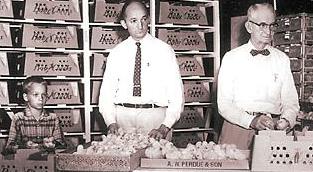 The evil Frank Perdue shown with his henchmen in this 1941 photo discussing the "Final Solution" for broiler chickens.

Somehow I have trouble identifying that chicken breast I ate last night with my cousins who died in German camps. And I must say that "Heil Frank Perdue!" seems to lack an ominous ring.

But then, I am a member of the group that constitutes the lowest form of animal life. No, not lawyers – humans.

Fortunately, the medical community has decided it’s mad as hell and isn’t going to take it anymore.

They pre-empted Wacky Week by launching their own campaign. It included a press conference, statements by scientists and patients affected by animal rights extremism, release of a joint consensus letter signed by the nation’s leading AIDS organizations supporting animal testing, and a report called Endangered Cures, which details specific areas of research threatened by animal rights activists.

Animal rights activists aren’t called that for nothing. They don’t just stand around on street corners politely handing out pamphlets. Indeed, they have struck at scores of labs across the country and in other nations, smashing equipment and releasing experimental animals – sometimes killing them in the process.

Among the raids the animal liberators have conducted was one on the laboratory of Dr. John Orem, who was using cats in painless research on crib death. Crib death will claim 8,000 babies lives this year.

Everyone who works with experimental animals lives in constant fear of harassment, vandalism, and death threats. Said PETA’s medical advisor, Dr. Neal Barnard, a few years ago, "We’re demoralizing the people who think there’s a buck to be made in animal research. And they’re starting to get scared . . . and they’re starting to veer away."

But the activists are also waging a war of public opinion with misleading ad campaigns, staged photos of animals in pain, and by enlisting the support of many celebrities like Paul McCartney, the B-52s, Kim Basinger, Mary Tyler Moore, Woody Harrelson, and Alec Baldwin – the last of whom was later spotted wearing a leather jacket. Oops.

"The worst aspect of these campaigns, says Frankie Trull, president of the Foundation for Biomedical Research. "Is the way they have shaped public opinion by providing misinformation and playing upon emotions of people who love pets."

This is ironic, because if the activists get their way, keeping a pet will be outlawed as slavery. Pet ownership is an "absolutely abysmal situation brought about by human manipulation," Newkirk told the Washingtonian magazine.

But such views are kept out of the slick adds. As a result, "They’re eroding public support that would allow this research to continue," Trull told me.

The stakes couldn’t be higher. Animal testing of drugs intended for humans is absolutely vital. Indeed, it’s required by law.

"All drugs approved by FDA in last 30 years have to be tested on animals," says Wise Young, a professor of neurosurgery at New York University Medical Center and medical advisor to actor Christopher Reeve.

Without animal testing, he told me, we wouldn’t have gotten anti-hypertension drugs, anti-diabetic drugs, pharmaceuticals for epilepsy, or any of the modern anti-depressants. "It’s horrendous the kinds of lives people have when they don’t have the benefits of research."

He noted that one drug originally tested on spinal cord injuries in humans failed. But later it was tried in much higher doses in animals. There it was found effective and the trials were successfully repeated in humans. This drug was given to Reeve and reduced his paralysis to the point where he has been able to resume much of his life.

Ultimately, the animal rights activists are simply parasites. They benefit just as much from animal-assisted medical research as anyone, even while they vigorously oppose it. Oh sure, they abstain from eating hamburgers or wearing raccoon coats.

On the other hand, they could wear bracelets with tags (similar to those worn by persons with penicillin allergies), saying "In case of emergency, do not administer any drugs or therapies tested on animals." Bet you don’t see that any time soon.