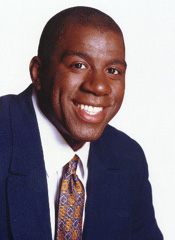 Magic Johnson's smiling face, 13 years after his HIV diagnosis, shows that AIDS is hardly the threat it once was.

"The proportion of Americans who consider HIV/AIDS to be the "most urgent health problem facing this nation today" has decreased from 38% in 1997 to 17% in 2002." So laments former Centers for Disease Control and Prevention (CDC) HIV/AIDS director Dr. Harold Jaffe in the August 27 issue of [Science](http://www.ncbi.nlm.nih.gov/entrez/query.fcgi?cmd=Retrieve&db=pubmed&dopt=Abstract&listuids=15333825)_. While lauding the U.S. overseas effort, he insists "We must ask ourselves why we, collectively, don’t care more about the domestic epidemic."

To a great extent Dr. Jaffe, now with the Department of Public Health at Oxford University in England, literally illustrates why AIDS should be eliciting less concern and funding. In the article’s sole graph, he shows new diagnoses peaked a full decade ago and are now barely half the rate as then. Deaths peaked slightly later and have declined about 75 percent.

About 16,000 Americans died from AIDS in 2002, approximately half the number that die annually from flu. Meanwhile, over half a million die from cancer yearly, with the butcher’s bill for incurable pancreatic cancer alone about twice that as for AIDS. According to the CDC, 435,000 Americans die each year from tobacco-related disease and another 400,000 from poor diet and lack of exercise. (Though arguably those last two figures are exaggerated.)

What Dr. Jaffe views with alarm actually reflects a decrease in national hysteria. It’s obscene that almost a fifth of Americans still consider AIDS our prime health problem when heart disease, which kills 700,000 Americans annually, gets a worry rating of merely eight percent.

Dr. Jaffe valiantly uses a number of hoary old tricks to exaggerate the AIDS problem, but all crumble into dust when exposed to the rays of the sun.

For example instead of comparing deaths from AIDS to other diseases, Dr. Jaffe compares them to war deaths. That’s hardly fair since even in the bloodiest days of the Civil War or World War II, disease deaths have vastly outweighed those from combat.

Then he hits us with the one AIDS figure that’s actually going up, that of people living with the disease. Yet this merely reflects the good news that fewer people with HIV/AIDS are dying from the disease. Which would he prefer? 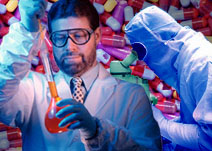 Dr. Jaffe notes the disparate impact on minorities, that "AIDS cases rates are 10 times higher in African-Americans than in white Americans." But if he tossed away his AIDS tunnel vision he would acknowledge that more than eight times as many blacks die of cancer than of AIDS. In fact, more than four times as many blacks die of cancer annually than Americans of all races die of AIDS.

Although AIDS cases and deaths are declining and the disease remains completely preventable, it nonetheless gets almost $180,000 in research funds per death from the National Institutes of Health. Compare that to its closest rivals: Parkinson’s disease, prostate cancer, and diabetes. All of these receive about $14,000 per death. Alzheimer’s gets about $11,000. Yet Dr. Jaffe bemoans that the CDC HIV/AIDS budget has not kept up with inflation over the last few years. So a minimum 13-to-1 spending ratio over any other disease somehow isn’t enough.

Further, it’s possible we’ve already reached the point where HIV infection has become a controllable disease, especially for those with recent diagnoses. That’s hardly the case with Parkinson’s or Alzheimer’s.

And that only includes medical research funding. Each year under the "Ryan White CARE" legislation, which Congress unanimously re-authorized in 2000, approximately $2 billion in taxpayer funds are doled out to AIDS patients for medicine, housing, meals, cash payments, dental care, and a vast panoply of goods and services. Victims of no other disease have any such entitlement.

And yet as Dr. Jaffe’s complaint makes clear, for the activists and bureaucrats nothing we say or do or spend will ever be enough. To which we must finally respond: Enough!