In January, just a month before the opening of the Winter Olympics, the talk was suddenly about the Summer Olympics, specifically the Australian basketball team’s expressed fear that its members could be infected with the AIDS virus, HIV, on the court by Olympic hopeful Earvin "Magic" Johnson, After all, couldn’t Johnson get cut on the court and his blood mix with the blood of an Aussie player who was also cut?

Yes, in theory, but the chance would be a small fraction of that of being killed in a car on the way to the game. This is merely the latest manifestation of the risk-free society as applied to AIDS, reflecting an obsession with farfetched means of transmission. The threat of death by AIDS is treated somehow completely different from the threat of death by anything else.

Witness legislation introduced by Rep. William Dannemeyer (R-Calif.) and named for Kimberly Bergalis, who died last year of AIDS apparently contracted from her dentist. Shortly before her death, Bergalis testified on behalf of the bill. The legislation would require that doctors and other health-care workers be prohibited from doing invasive medical or dental procedures if they are infected. To determine if they are, such workers would be forced to undergo testing. The bill would also permit doctors to test persons for the AIDS virus without their consent.

Dannemeyer is in excellent company. But for the mandatory aspects, his bill isn’t radically different from a Department of Health and Human Services proposal to require identification and testing of health-care workers who engage in invasive procedures and encourage hospitals to in turn encourage all admitted patients to be tested for the AIDS virus, a proposal endorsed by the American Medical Association.

In a recent issue of The New England Journal of Medicine, two doctors calculated that the risk of getting AIDS from a doctor during an operation is 1 in 21 million for every hour of the operation, or about the same chance that a person will be in a fatal accident on the way to the hospital. Because of this tiny probability of infection and the even tinier probability that mass testing of health-care workers could lower it even a bit, many health-care-worker organizations. such as the California Medical Association, have told HHS they won’t go along with its scheme.

Representatives of some medical associations have claimed that mandatory testing of health-care workers would cost a billion dollars a year. Even if the cost is only half that as that, as University of Southern California health economist Joel Hay calculates, it still illustrates a nice point. Do we really want to spend $500 million a year to prevent that one infection per 21 million operation hours when that is half the federal budget for heart disease, which kills over 750,000 Americans a year? And with over 40,000 new AIDS cases to be diagnosed this year, why are we considering spending such an enormous sum on an attempt to prevent a handful of new infections?

Further, the federal Centers for Disease Control (CDC) now believe that some of Acer’s patients may have been infected by a tool that the dentist failed to keep clean. This raises the possibility of an HIV-negative health-care worker nevertheless infecting patients. Indded, patient-to-patient infection is common in African nations and other under-developed countries, and far more easily done, from a strictly mechanical point of view, than health-care-worker-to-patient infection. But the practices that allow such transmission are already forbidden in this country.

As to protecting uninfected health-care workers, despite what a vocal few may say, they don’t need whatever protection Dannemeyer or HHS has purported to give them. To date, the CDC list about 60 health-care workers who appear to have gotten AIDS through their jobs. That is out of 6 million in the country.

In a recent mass testing of 3,420 orthopedic surgeons, only two proved positive for HIV, and both of those admitted to "nonoccupational risk factors," presumably homosexual intercourse. (That this survey was of orthopedic surgeons is interesting since it is an orthopedic surgeon, Dr. Lorraine Day, formerly of San Francisco General Hospital, who has been among the strongest proponent among physicians for mandatory testing of patients and who claimed that if she had continued to conduct surgery, her infection would have been virtually guaranteed.)

A far better substitute to testing patients is simply to behave as if all patients are infected and take what the CDC call "universal precautions." Not only will following the CDC guidelines reduce a low chance of HIV infection to almost zero, they apparently have also been a factor in reducing transmission of other diseases - diseases far more readily passed than HIV - to health-care workers.

As to the costs of testing patients, this would depend on how many institutions complied and how many patients complied, but with about 25 million hospital admissions a year at about $50 a test, the cost for screening would approximate the amount the federal government will spend this year on cancer, a disease that will strike over 1 million of us in the next 12 months and will kill half that number. Testing proponents will argue that the $50 cost is inflated, including as it does the cost not only of the test procedure but also of counseling. But providing counseling when someone is undergoing testing for a terrible, fatal disease, and especially when the patient has been diagnosed as positive, should hardly be considered a luxury in this country.

In support of his proposal, Health and Human Services Assistant Secretary James Mason says massive screening has traditionally been used to detect sexually transmitted diseases, especially syphilis. True enough. But as Harvard doctor and historian Allan Brandt points out, it was also of little use. What ended epidemic syphilis in this country wasn’t screening, but penicllin. This brings up a major distinction between syphillis and HIV infection. Detecting the first was the essential equivalent of curing it. Detecting HIV, alas, has no such result.

But this is where Mason makes his second point. HIV can be treated, he says. Early detection offers infected persons the possibility to obtain this treatment.

However, at best, AZT prophylaxis may allow an HIV-infected person to delay full-blown AIDS by a year or two, and a study recently published in The New England Journal of Medicine found that people, once they do get full-blown AIDS, will die more quickly than those who haven’t used AZT prophylaxis. Delaying symptoms means a lot to someone suffering from HIV infection, but consider the difference between that and a screening program for any number of other diseases, such as breast cancer or prostate cancer, where an early diagnosis generally means saving the person’s life. Why doesn’t HHS propose screening all hospital patients over 40 for those diseases, when the number of lives saved would be much higher and the cost tremendously lower? Why, because HHS doesn’t feel the pressure to do something, anything, about those diseases.

And how can Dannemeyer and other conservatives chide liberals for fearing less than one in a million chance of dying from pesticidie residues on vegetables an at the same time try to eliminate all possibility of accidental AIDS infection? We cannot obtain a risk-free world, but the attempt to obtain one may prove dear indeed. 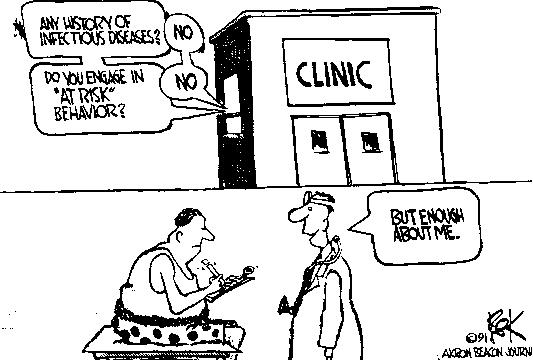 It is understandable that lawmakers would think, or at least posture, that laws can prevent the spread of AIDS; that Kimberly Bergalis would be angry at the lot she drew and would support legislation intended to stop others from drawing it; that the American public, more familiar with the Bergalis case than with the low magnitude of the risk involved in transmission of HIV between health-care workers and patients would be frightened; and that HHS and the AMA would react to political pressures to advocate measures that their officials will tell you in private are ridiculous. Laws and policies stemming from these motivations and beliefs would also be understandable. But they would still be wrong.

The main problem this country has had in dealing with AIDS, with all aspects o the disease, has been its lack of perspective. Witness how the media threw 10 years of AIDS statistics overboard and declared that at last the heterosexual epidemic was upon us when Magic Johnson announced he was HIV-positive. The press simply assumed he was telling the truth about his sexual history. But a man with $12 million yearly in endorsements might want to deny his bisexuality. And assuming he is a heterosexual, Johnson’s sex life is still far from typical.