2006 wasn’t a good year for "America’s Sweetheart." In one recent setback, in which she acted as plaintiff, she sued 31 hospitals she declared were making unfair claims against Medicare. Her payoff would have been tremendous. But two separate judges tossed out all the cases. They asserted, among other things, that Brockovich has no standing since she has no involvement in any way with Medicare nor was ever even treated by the hospitals in question. Any first-year law student could have told her that.

Far worse for Brockovich was the November 22 Los Angeles County Superior Court decision to reject the first 12 cases in litigation her firm of Masry & Vititoe started in 2003 against the city of Beverly Hills, the school district, and a slew of oil companies. The suit claims an oil rig on the campus of Beverly Hills High School caused extraordinary high rates of several types of cancer among the approximately 11,000 alumni who attended between 1975 and 1997. Yet the firm never proffered the least evidence that, while some alumni certainly have suffered from cancer, the rig had or even was capable of causing the diseases in question. The rest of the cases against Beverly Hills were dismissed January 9.

Undaunted, Brockovich is on the warpath against a proposed 160-acre composting facility near the tiny California town that made her rich, Hinkley. Such facilities provide the vital service of converting feces to fertilizer for food and fodder. It will provide California farms with about 200,000 tons of compost a year. The alternatives are burning and landfilling the material. Both waste a valuable natural resource, while burning pollutes the air and landfilling takes up valuable space.

But Brockovich doesn’t seem to care for any industry that doesn’t prepare medical-grade silicone gel. She sides with those who insist that the material collected from municipal sewage systems would send harmful bacteria, viruses, or at the least nasty smells and flies towards Hinkley. She’s done radio shows on the subject, as always has gotten tons of media attention, and has even paid to bring in a bus load of activists.

And naturally she has threatened to call in the sharks to pursue the issue under state environmental law. But again, she’s setting herself up for a scolding by a judge. For again, Brockovich is on the wrong side of reality.

The compost company, Nursery Products of Apple Valley, California, only takes in sludge, called biomass, from area sewage systems that have already gone through a four-step clean-up process. After it arrives at the composting facility, the biomass is mixed with wood fiber and heated to 131 degrees as mandated by the EPA to kill bacteria.

"The site without a doubt carries zero risk to public health and the environment," Alan Rubin, chief author of the EPA’s regulation-setting standards on using and composting biosolids, told me. He’s now a consultant to Nursery Products but worked at the EPA for 28 years. "There will be no impact to groundwater, no impact on surface water, and windblown pathogens wouldn’t survive more than a few seconds" he said. 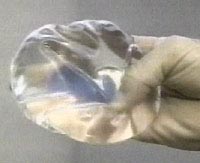 Perhaps the only industry Brockovich likes is that which produces these.

That’s probably why San Bernadino County, where Hinkley is located, in September released a 150-page Draft Environmental Impact Report analyzing the environmental impacts of the proposed compost project finding "no impact" or a "less than significant impact" on the environment. Under the chapter ”Effects not Found to Be Significant” it lists:

Are we missing something here, other than ”Whether Erin Brockovich Approves”?

As to smells and flies (which the draft report covers under ”aesthetics”) the closest edge of Hinkley to the facility would be eight miles away — plenty of space for odors and insects to dissipate. On the other hand, there’s a dairy farm right next to Hinkley’s school. Thus daily basis the children are exposed to the fresh fragrance of raw manure with accompanying germs, and flies. Ah! But that’s homegrown manure, smells, germs, and flies.

Still, anything that embarrasses Brockovich and further reveals her as all breasts and no brains can’t be all bad.