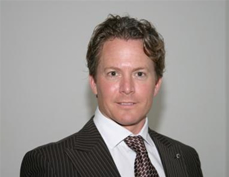 Handsome Hans Keirstead has been promising human clinical trials "next year" based on his rat studies every year since 2002.

If you or a loved one is currently ill or planning to be so anytime in the near future, don’t bother looking to embryonic stem cell (ESC) research to help. Instead, you need to consult the adult stem cell (ASC) literature whereupon you’ll find these little guys currently treat or cure over 70 diseases and conditions even as they’re involved in almost 1,300 human clinical trials.

At this point, all that ESCs hold is promise. They are used in no treatments, cures, or human clinical trials. They are used in raising false hopes and hence money. The University of California, Irvine’s Hans Keirstead, who claims to have used ESCs to cure paralyzed rats, said last year he would start human clinical trials this year. Problem is, he’s been saying ”next year” since 2002. Check your calendar. Moreover — and this is typical of ESC researcher grandstanding — his rats weren’t even paralyzed. Rather, as opposed to what he tells reporters, including the late Ed Bradley on ”60 Minutes the injuries were ”moderate in severity [and] sparing some hind limb motor function,” as he reported in a medical journal.

ESC lobbyists sniff that ASC research got a big head start. ”Researchers began using adult stem cells from bone marrow back in 1960,” claims Religioustolerance.org on its website. (Note that the very name furthers the ESC lobby’s goal of portraying all their opponents as religious fanatics.) ”It was only in 1998 that other researchers were able to isolate and cultivate embryo stem cells. Adult stem cell research thus has an almost four decade head start compared to embryo-derived stem cells.”

In fact, ASCs and ESCs were both discovered in rodents in the 1950s. But the ASCs — from marrow — were readily adaptable for treating leukemia and other human blood disorders. ESCs, conversely, precisely because of their much-touted flexibility, were so hard to work with that it wasn’t until 1998, in the lab of the University of Wisconsin’s James Thomson, that the first human line of ESCs was created. They remain a real bear to work with, which is why their domain remains primarily the Petri dish.

But what is the ESC promise and when will these cells and scientists deliver?

Since they are mere days old, ESCs are so malleable as to lend themselves to becoming mature cells from all three germ layers of the human body — about 220 types of cells total. ASCs, because they are more developed, were long thought to be considerably less flexible. That is, you could get marrow from marrow stem cells along with blood, muscle, and an amazing array of other types of mature cells. But you couldn’t get neurons or pancreatic cells because those are in different germ layers. 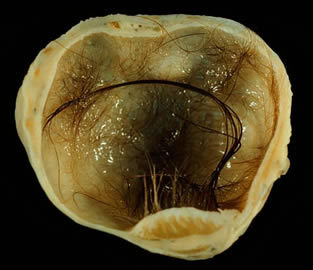 You don’t have to look twice at this teratoma of the ovary to wonder why this particular malignancy is called a "monster tumor."

But two developments have eaten away at this apparent ESC advantage.

The first is that while ASCs were originally identified in marrow, now they’ve been found throughout the body including skin, brains, spinal cords, dental pulp, muscles, blood vessels, corneas, retinas, livers, hair follicles, and umbilical cords. Fat, America’s most inexhaustible resource, contains stem cells that have been converted into more fat (for cosmetic purposes), bone, cartilage, and nerve cells. Importantly, nerve cells are in a different germ layer from fat.

The second development is that since 2002 researchers have been discovering ASCs that apparently can be converted to mature cells in all three germ layers, beginning with the University of Minnesota Stem Cell Institute Catherine Verfaillie’s finding, announced in Nature magazine. Others have since used different types of cells than she did, but to the same effect.

The most exciting news in this area lately has been the revelation, announced in January, of Anthony Atala. Atala, a physician and director of the Institute for Regenerative Medicine at Wake Forest University School of Medicine, found that stem cells in the amniotic fluid that fill the sac surrounding the fetus appear to be just as versatile as ESCs. As he told PBS’s Online NewsHour, ”We have been able to drive the cell to what we call all three germ layers, which basically means all three major classes of tissues available in the body, from which all cells come from.”

One advantage of ESCs has been that most types of adult stem cells cannot be multiplied outside of the body for very long, embryonic ones may replicate in the lab indefinitely. But Atala’s amniotic stem cells grow as fast outside the body as ESCs (doubling every 36 hours), and he’s now been growing the same cell line for two years with no indication of slowing.

ESC researchers have desperately tried to downplay these findings, to the extent that The New York Times, which told readers three years ago that there were no cures or treatments involving ASCs, refused to even mention Atala’s work. Newsweek International did make note of it but claimed, ”Many scientists are quick to emphasize that comprehensive human trials are still many years away.”

The magazine is correct only if ”years away” means ”years ago.” As Atala himself has noted, amniotic stem cells are identical to placental stem cells. The New England Journal of Medicine carried one paper on a placenta stem cell trial back in 1996 and another paper two years later. There’s been an ongoing clinical trial since 2001 to treat sickle cell anemia.

Backers of more funding for ESC research are also quick to point out that Atala himself, after his article was published, wrote in a letter: ”It is essential that National Institute[s] of Health-funded researchers are able to fully pursue embryonic stem cell research.” But as I observed two years ago, ASC researchers almost always say something like that after making a breakthrough. NIH is the hand that feeds them and NIH likes handing checks to ESC researchers. There’s also nothing to be gained by angering colleagues whose livelihoods are based on tinkering with ESCs, if not actually accomplishing anything.

ESCs certainly had a head start in the race to develop all types of cells from a single one. But that gap has either been rapidly narrowed or even erased. Meanwhile the ASC advantage in therapies grows by the month.

Which leaves us with a final but very important question. When will the ESC promise pay off? When can we expect something more from them than arcane articles in medical journals (though repeatedly portrayed as miracle breakthroughs in The New York Times)? You know, like, well, actually making sick people better?

The standard answer is in about a decade, which must be true because it’s been ”in about a decade” for years now. Yes widen, lengthen and deepen that federal trough enough and toss in lots of state funding from places like California (3 billion bucks over ten years) and we just might be able to do with an ESC in 2017 what we can with an ASC today. But one leading ESC scientist says even that may be far too optimistic. That scientist is none other than the University of Wisconsin’s James Thomson himself. 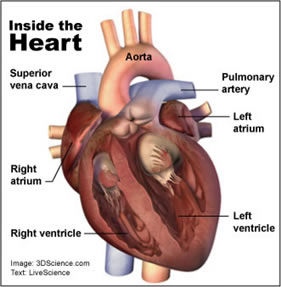 In addressing a convention in February, Thomson pointed out that obstacles to therapeutic ESC research are daunting. Among them is that ES cells require the recipient to permanently use dangerous immunosuppressive drugs and that they have a nasty tendency to form into teratomas — which means ”monster tumor.” Said Thomson, ”I don’t want to sound too pessimistic because this is all doable, but it’s going to be very hard.” Further, ”It’s likely to take a long time.” How long? The Associated Press writer present characterized it as "likely decades away." That’s a minimum of 20 years, with no maximum.

As to what we can expect from those therapies, as the AP writer quoting Thomson put it: ”One day, some believe the [embryonic stem] cells will become sources of brain tissue, muscle and bone marrow to replace diseased or injured body parts.” In other words, they’ll be able to do what ASCs do right now. Muscle? In the last few years, doctors have used ASCs to rebuild hearts and livers not in Petri dishes but in live humans. Marrow? As noted, marrow stem cells have been curing people for half a century.

Finally, neuronal stem cells have treated brain diseases like Parkinsonism in animal models and assuredly will soon enter human testing. Not soon enough, to be sure, but certainly a lot earlier than ”decades.” Autopsies on bone marrow recipients have found that some of the cells made their way to the brain and became nerve cells. Whether this was actually therapeutic remains unknown. So let’s just give the ESC researchers all the money they want for their decades away promise, mindful that those funds could have gone to ASC research projects treating and curing humans today. Then perhaps they’ll announce that, given enough money and perhaps decades, they’ll also build a computer with the processing power of a dime-store calculator.