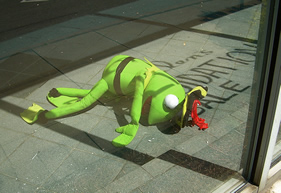 Although the "worried well" are still swamping emergency rooms, our pig flu is appearing to be a piglet. But now comes a study in Science magazine claiming the outbreak portends a pandemic. The media have gone hog wild over it. "Swine Flu Is as Severe as 1957 Pandemic," blared a typical headline, about the outbreak that killed 1 to 3 million people worldwide and 70,000 Americans.

But actually reading the study and its accompanying citations — rather than just the summary and press release, as most reporters do — shows that despite its spin, it actually supports alternate data showing both that swine flu is less contagious and far less severe than ordinary seasonal flu.

The paper has three citations in support of its "comparable" claim, again with one by the lead author. Of the remainder, one states that estimates "for pandemic influenza vary widely, ranging from 1.68 to 20." It is most definitely the low end.

Another powerful indicator of swine flu’s lesser contagiousness is that the Mexican epidemic has peaked. Officials there on May 12 said they hadn’t confirmed a new case in four days.

The widely used estimate for the U.S. seasonal flu death rate is one per one thousand infections (0.1%). For swine flu, there are currently three Americans dead — all of whom had previously been chronically ill — out of 4,714 confirmed and probable cases. (The fourth "U.S. case" was a Mexican toddler who sickened there but died here under treatment.)

But with any flu, each confirmed case represents many milder or even asymptomatic hidden infections. Indeed, the Science paper said Mexico apparently has had hundreds for each. Thus to peek below the tip of the swine flu iceberg would be to find a death rate dramatically lower than that for seasonal flu.

Could something happen to change what we’re seeing?

Evolution favors mutations that make a virus less harmful; better to adapt to a host than to kill it. Further, swine flu is no more likely to undergo such an evolution than the numerous seasonal flu strains that go around each year.

What of warnings of a winter "second wave?" That’s "when influenza viruses usually thrive," the WHO’s Fukuda says. But "thrive" refers only to contagiousness; cold has no impact on severity. We certainly could see many more infections down the road, but they’ll be just as mild as current ones.

It’s understandable that the WHO would be feeling a bit embarrassed over its squawking since 2003 over avian flu. That virus, which the group’s "flu czar" David Nabarro once said threatened to kill as many as 150 million people, has steadfastly refused to go pandemic. According to a 2007 amino acid sequencing study, it’s light years away in evolutionary terms from the ability to do so.

So perhaps the organization figures that with enough bottles of Wite-Out it can just reuse all those pandemic documents by replacing "avian" with "swine."

Or perhaps sensing the public has had enough, the media will finally say "show me the beef!" Er, uh, make that "bacon."