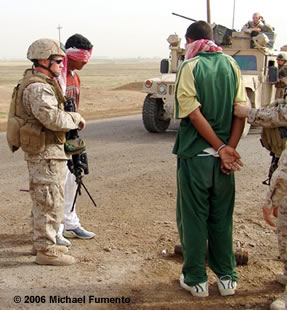 How strange! I spent all three of my Iraqi embeds in western Al Anbar because that’s where the war was worst. Birthplace of al Qaeda in Iraq (AQI) and cradle of the Sunni insurgency, graffiti declared it “Graveyard of the Americans.” Indeed, I was in combat with the first two SEALs to die in Iraq, including the first to win the Medal of Honor (posthumously). I talked strategy with Army Cpt. Travis Patriquin, designer of “The Awakening” that turned enemy Sunni tribes into allies against AQI, while none of this was possible without tremendous help from chief Anbar Marine Public Affairs Officer Maj. Megan McClung. An IED blast killed them both.

So how can it be that last year AQI fled the province and now we’ve handed military control of a pacified al Anbar to Iraqi forces, in what the AP properly called “a stunning reversal of fortune?”

Further, how could this have occurred just two years after the Marines themselves, who were in charge of Anbar military operations, admitted in a classified report that “there is almost nothing the U.S. military can do to improve the political and social situation” and we were “no longer able to defeat a bloody insurgency” or “counter al Qaeda’s rising popularity . . .”

The answer is they didn’t.

What we knew of the report, by Marine intelligence office Col. Peter Devlin, and which instantly became “the conventional wisdom” on al Anbar, came via essentially a single source. That was Washington Post reporter Thomas E. Ricks, in a Sept. 2006 article “Situation Called Dire in West Iraq: Anbar Is Lost Politically, Marine Analyst Says,” and a follow-up in late November, “Anbar Picture Grows Clearer, and Bleaker.” It’s obvious now that either the report itself or the Ricks’ presentation of it missed the mark worse than an F-16 bombing Baghdad and hitting Basra.

Yet even at the time, articles from Al Anbar itself (not Ricks’ roost in D.C.) contradicted the Post’s presentation. These included my November 2006 Weekly Standard article Return to Ramadi (My original title: “Retaking Ramadi”) and an extensive piece in Britain’s most prestigious newspaper, the Sunday Times, titled “Fighting Back: The City Determined Not to Become al Qaeda’s Capital.” Both appeared over a week before the “Clearer and Bleaker” Post story. Milbloggers like Bill Roggio interviewed officers who’d seen the report and said Ricks’ presentation was essentially false. Maj. McClung couldn’t discuss the report with me, but her father tells me she, “thought it was a hoot that Anbar was lost”

I wrote that the city was slowly being taken, relying in part on my own experiences as contrasted with those reported from my Ramadi trip the previous April, when AP reporter Todd Pitman, with whom I was embedded, observed the "sheer scale of violence in Ramadi is astounding.” I observed both morale and tactics. One of my convoys into the city during the second trip, I said in an interview with Human Events, “believe it or not, was in broad daylight. My God, to think about a broad daylight entrance into Ramadi down Route Michigan six months ago, people would have thought you were crazy.” I also conducted countless on-site interviews with non-politicized military (I’ll trust a sergeant’s opinion any day over that of a high-ranking officer), and available data. 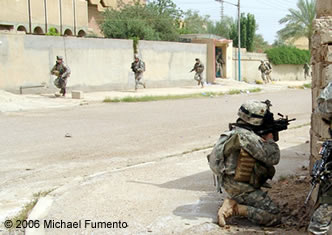 As to Ricks, he admitted to NPR “I haven’t actually read [the report],” rather “I’ve had many people describe it to me.” You’d hardly guess that from his articles though, such that supporters of the war effort were just as likely to claim the report was “leaked” to Ricks as were opponents.

Instead what we got was a report as seen through two filters: First, Ricks selected his interviewees who, since by definition they agreed to discuss a classified document, probably held a grudge against current military actions. The second filter was Ricks himself, hardly the epitome of even-handedness as author of the best-selling book about Iraq whose title says it all: Fiasco.

Much of what Devlin did write was certainly meaningless to readers without background knowledge. “If you’re thinking this doesn’t reflect doomsaying media interpretations of [Devlin’s report] indicating there’s no functioning government in the Anbar, you’re right,” I wrote in “Return to Ramadi.” They have no EPA or Department of Education certainly. We’re not going to change that system soon and there’s little reason to do so.”

Perhaps Ricks was trying to pull off an Iraq version of the media’s Tet Offensive offensive, a battle that crushed the Viet Cong and yet the media declared it a terrible U.S. defeat. Life imitated art as portrayal sucked the life out of our war effort. In any case, others in the mainstream media seemed to have that idea.

NPR relied on Ricks to pronounce “we’ve lost the fight” in Anbar. “The message is, stay the course,” MSNBC’s Keith Olbermann declared, “But in the huge Anbar Province, word from our military is that we’ve already lost there politically.” Jim Miklaszewski told ****NBC Nightly News viewers that "The top secret report . . . says there’s no chance the U.S. military can end insurgent violence in al Anbar” and “the U.S. is preparing to eventually concede a large piece of Iraq to the enemy . . . ” CNN’s Michael Ware used Ricks’ “revelations” to opine “we only have a third of the troops there that are needed to even begin to make a dent in al Qaeda.” (Incidentally, some pundits have said success in Anbar was a direct result of “The Surge.” In fact, “The Awakening,” in which fed-up local Iraqi tribes turned against AQI and other terrorist groups, began a year before “The Surge” did.) So much for needing three times the troops to “make a dent.” 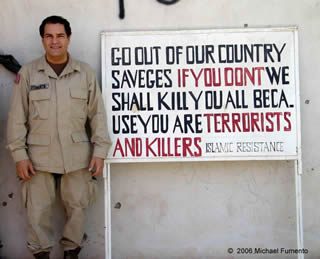 The writer next to a sign proudly displayed at a tiny forward operating base in Karmah, northeast of Fallujah, Anbar Province.

Democratic Maj. Leader Harry Reid (D.-NV) embellished the myth. “We have had, this week, the colonel in charge of Anbar Province say that it’s a civil war; it’s been lost,” he said during the NewsHour with Jim Lehrer, thereby giving Devlin a huge promotion and tossing in “civil war,” which nobody claimed was in the report. ****Premier cut ‘n’ runner Rep. John Murtha (D-PA) told Lehrer, “Two million people live there. They have no water at all, no oil production, they have no electricity at all in that province where is the heartland of the defense.” In fact, I saw jungles of generator lines and everybody had water. They merely didn’t get these from centralized points.

Most important, Reid suggested that had there been a Senate Democratic Majority (as there is now), it would try to force withdrawals that year. It would indeed have been Tet déjà vu.

But there’s still time for a Tet II. Victory in Iraq is years away yet. This even as Afghanistan is heating up and a July ABC News/Washington Post poll found 45 percent of Americans think the conflict not even worth fighting. And that’s the “good war,” remember? Ricks’ rotten reporting and the slavish devotion to it in the mainstream media dare not be forgotten.