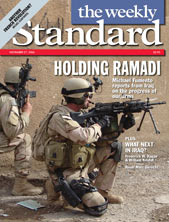 Michael Fumento�s upbeat account of his trip to Ramadi contains a disturbing statistic (though it is not presented as such.) �The 1st Battalion, 506th Infantry Regiment, claims to have inflicted 600 fatalities on Iraqi insurgents in less than a year of deployment in that troubled city.

�Whether true or false, this is worrisome. �

If true, and we assume conservatively that the 1/506 inflicted as many losses on the Ramadi insurgents as all other coalition units combined (the 1/506 is just one of four or five U.S. and Iraqi battalion sized units in the area, plus special forces units), the enemy would have sustained at least 1,200 fatalities in recent combat. �Add to that a very conservative estimate of 1,200 moderately or seriously wounded insurgents (the usual ratio is about 3 or 4/1, but let�s assume that the insurgents do not effectively evacuate or treat their wounded) and insurgent losses go up to 2,400 men. �Since even elite units have trouble sustaining loss rates in excess of 25% (and nobody is claiming that the insurgents are elite) this suggests that the active insurgent force in Ramadi must number at least 10,000 men. �Add two or three times that number of active but non-combatant sympathizers, which would be about the minimum necessary to sustain such a force, and you have a substantial enemy. �

Successful counter-insurgency operations require a very high force ratio of government troops to insurgents, sometimes put as high as 10-1 (see the proposed final draft of FM 3-24 the Army�s new counter insurgency manual). �If the claims of the 1/506 are correct, then the active insurgent combat force in Ramadi is at least as large and possibly larger than the combined coalition forces combating them (a single U.S. brigade, plus two Iraqi battalions and some Iraqi police.) �

Of course, it is always possible the paratroopers of the 1/506 have greatly exaggerated their accomplishments, but obviously this would not be a good thing either.�One way or�the other, the news from Ramadi doesn�t appear to be quite as good as Fumento�s piece suggests. �

Mr. Keiler�s first mistake is extrapolating from a single unit in Ramadi to all U.S. forces there. Consider that SEAL Team 3 lost two of its 19 men, or about 10 percent during a deployment of about half a year. Do 20 percent of all U.S. troops deployed there die? Hardly. Even for 1/506th it was about 1 percent over the course of a year. I specifically chose to embed at Camp Corregidor with the 1/506th (who haven�t been paratroopers for decades now, by the way, despite their vestigial �Airborne� designation) because I was told they were seeing the most action which means you�d expect them to be racking up a relatively large number of kills.

Nobody knows how many insurgents are or were in Ramadi; but even phrasing it as such is incorrect because as I pointed out in my article Ramadi is a way-station from Syria and Jordan to all of Sunni Iraq. Theoretically it could have a population of 5,000 insurgents on any given day and yet suffer 6,000 insurgent casualities over the course of a year.

As to that alleged 10 to 1 ratio, the proposed final draft of FM 3-24 stated on page 20, �It is frequently stated that a 10 to 1 or 20 to 1 combatant ratio of counterinsurgents to insurgents is necessary for counterinsurgency victory. In reality, no such fixed ratios exist. As in any war, all correlations of forces to defeat an insurgency depend on the situation.� That�s the opposite of what Mr. Keiler claims the document states. (The final draft, released December 15, 2006, omits the discussion.) The so-called �Malayan Emergency from 1948-1960 involved some 35,000 British and 60,000 Commonwealth troops against an approximate army of 30,000 communist guerrillas. With this mere 3 to 1 ratio, the Brits won. In Vietnam, although the war was ultimately lost after U.S. troops departed, we certainly held our own while being massively outnumbered by the enemy. It was not long ago that it was also widely believed offensive troops needed a 3 to 1 advantage over those on the defense. That was hardly borne out by the Persian Gulf War or the 2003 invasion of Iraq in which the defenders enjoyed strong numerical advantages.

Finally, on the basis of how Mr. Keiler comported himself on other matters, let�s assume there�s no reason to accept any of his assumptions.