Yes, it’s California, land of the Governator, who signed a bill that may say “Hasta la vista, baby!” to perhaps a million jobs. Yet there’s hope the prosperity terminator can be stopped.

The state boasts that the California Global Warming Solutions Act of 2006, better known as AB 32, is “first-in-the-world.” It requires that by 2020 the state’s greenhouse gas emissions be reduced to 1990 levels, about 25-30 percent less than they’d otherwise be. It demands another 80 percent reduction by 2050. This even as the state’s population is projected to grow from 34 million to 59 million by then. Minor implementations have already begun and the law fully kicks in during January 2012.

Four years ago California’s economy was booming, with joblessness a mere 4.8 percent. But now that the bear on the state’s flag has taken on new meaning and unemployment is 12.3 percent, even many that are convinced that global warming is a serious man-made problem are having second thoughts. That’s why the California Jobs Initiative, Proposition 23, got the signatures required to put it on the November ballot. It would suspend AB 32 until unemployment stays below 5.5 percent for four consecutive quarters.

Originally the California Air Resources Board (CARB) forecast that by 2020 the law would expand economic production by $33 billion annually, increase overall personal income by $16 billion and per capita income by $200, while adding more than 100,000 jobs. But when that failed the laugh test, CARB rejiggered the numbers.

A new CARB report in March forecast continued economic growth for California, while also concluding that AB 32 would barely slow it. Indeed, under CARB’s best-case scenario, the law would actually add 10,000 jobs. Ah, but the study had four other scenarios. All of them indicate job losses—as high as 320,000.

But that’s almost a state secret, because reporters prefer one-page press releases to 118-page reports, and for that matter prefer press release titles to the whole page. CARB’s press release was titled “AB 32 Will Lead to Job Growth, Energy Savings, and Rises in Personal Income,” yet the text only gave figures regarding the economy as a whole, not the impact of AB 32. The upshot is that California voters have no idea what CARB really found.

Even the “worst-case scenario” may be far too cheery, though. That’s according to a parallel study by the prestigious Charles River Associates, funded by CARB and using CARB’s own data. It found the agency’s worst-case assumption of a 1.4 percent drop in Gross State Product was actually the best that could be hoped for. And where CARB found household income falling at worst by $270 per year, the Charles River report showed a $1,175 drop was the best possible result.

Charles River didn’t provide a jobs estimate. But extrapolating from its other findings, a loss of “only” a third of a million jobs seems highly optimistic. Indeed the 1.1 million job loss forecast in a 2009 study commissioned by the California Small Business Roundtable seems closer to the mark. That’s 6 percent of the current workforce.

AB 32 supporters claims it will create so-called “green jobs” and Prop 23 would destroy them. They’re focusing on the visible increase in demand for, say, solar panel installers. But they’re ignoring losses that will occur throughout the rest of the work force, either because businesses can’t afford to hire, or because they can move or outsource to 49 states unburdened by AB 32. And don’t forget a certain low-wage, low-regulation country on California’s southern border.

CARB also insists “The potential costs of implementing the Plan pale beside the cost of doing nothing,” then produces the usual global warming horror predictions. But “the Plan” isn’t AB 32’s direct impact on potential warming; there will be none. The Waxman-Markey cap-and-trade legislation would have restricted all U.S. emissions, of which California produces only 6.2 percent. (Though it produces over 13 percent of the nation’s GDP.) Yet even Waxman-Markey supporters admitted it would “probably have only a tiny effect on rising temperatures.” 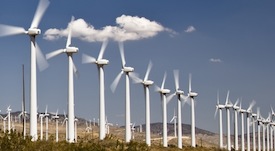 California will gain some "green jobs," such as those involving windmills. But the employment net loss could be over a million.

Rather, “The Plan,” is the presumption that the rest of the world will magically follow suit. Instead of “build it and they will come,” it’s “implement it and they will follow.” After all, we’re California!

Sorry, but it’s been tried. It was called the Kyoto Protocol, and 10 of the EU-15 countries that signed on aren’t even complying. Of course, at the time it seemed like a good idea—until they had to start paying for it.

Speaking of which, Golden State residents should also be outraged that once again they’ve been designated America’s sacrificial lamb. As it is, only four states emit fewer greenhouse gases per person. California residents are paying dearly for that with the nation’s 7th-highest energy prices, as well other higher prices. Fairness aside, this also means that in California the “low-hanging fruit” has been picked. Emissions reductions virtually anywhere else in the country would provide more bang for the buck.

So AB 32 won’t reduce warming, won’t encourage imitation, but will hobble the economy and wipe out jobs. And long-suffering Californians are the last who should be forced to endure it.

But the state wants to send a message, and it’s not about global warming. Rather it’s, “Hey, we’re still the nation’s trailblazer!” Which it is, if you include signaling where not to go.