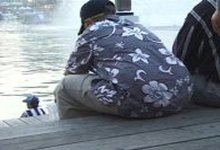 Last week the Center for Science in the Public Interest (CSPI) launched a new campaign aimed at slowing the growing girth of American children and adolescents. The group called on food and beverage makers to dramatically cut back television advertising of junk food to children, reduce product placements that cater to kids, and nix product tie-ins aimed at youngsters – like SpongeBob Cheez-Its and Hostess Twinkies with Shrek "ogre-green" filling. "No parent would allow a door-to-door salesman to come into the house and spend a few unsupervised minutes with the kids, yet junk-food manufacturers have similar unfettered access to kids’ impressionable minds via advertising and marketing," declared CSPI’s executive director, Michael Jacobson. The Association of National Advertisers fired back, predictably, by putting the blame on parents. The group’s chief lobbyist, Daniel Jaffe, told WebMD Medical News, "If kids say they want something, the parent can say no."

Debating how much blame to assign television advertising for childhood obesity isn’t irrelevant – but it misses the bigger picture. True, as any parent can tell you, it’s not easy to refuse children’s pleas, which marketers term the "nag factor" or "pester power." But in focusing its attention on television advertising, CSPI is foregoing an opportunity to confront an even bigger culprit behind childhood weight gain: the television itself.

Here’s what the science says: First, there is absolutely a growing and devastating obesity epidemic, the insistent denials of industry front-groups like the Center for Consumer Freedom notwithstanding. According to the federal Centers for Disease Control and Prevention, since 1970 the percentage of overweight and obese children has quadrupled, while the percentage has tripled for adolescents. The problem is worst among minority youths, almost a fourth of whom are overweight or obese.

Television has been known to be a serious contributor to this problem at least since William Dietz and Steven Gortmaker raised the issue in a landmark 1985 Pediatrics article titled, "Do we fatten our children at the television set? Obesity and television viewing in children and adolescents." That study, and numerous subsequent ones from around the world, found a direct correlation between being overweight and watching television. And that correlation is causal – studies (such as this one) have found that reducing TV viewing can reduce obesity. In 1993, Gortmaker and Dietz estimated that almost a third of childhood obesity could be erased if TV viewing were reduced to an hour or less per week.

Of course, advertising is clearly one of the major reasons for the correlation between TV and weight gain. In the late 1970s, kids watched about 20,000 commercials a year; now it’s about double that. A 1995 survey found that food commercials accounted for about half these, and that over 90 percent of the foods advertised were high in fat, sugar, and salt – in other words, junk food. According to a 2002 survey of peer-reviewed journal articles published since 1970, "Controlled studies on children’s choices have consistently shown that children exposed to advertising choose advertised food products at significantly higher rates than do those not exposed."

But TV’s pernicious contribution to pudginess is by no means all from the propagandizing effects of advertisements. One study, for instance, has suggested that watching TV may actually reduce resting metabolism lower than sleeping, although the evidence is mixed. But whether or not that’s true, watching TV comes at the steep opportunity cost of not doing aerobic activities – or even reading, which burns more calories than television watching. What’s more, children eat while they are in front of the TV – a lot. A Stanford study of Latino and ethnically diverse groups of children published last year found that 17 to 18 percent of weekday calories and approximately 26 percent of weekend calories were consumed during television viewing. Other Stanford researchers found that black girls consumed a stunning 27 to 35 percent of their calories while watching TV. Why is this a problem? Because food eaten in front of the tube is considerably less healthy and more calorie-laden than what kids would otherwise eat at the table. And that’s not only because of advertising: A Pediatrics study found that "the association between television and the foods children eat extends to foods not normally advertised and that the presence of television at meals acts as a marker of fundamentally different dietary patterns for children whose families have incorporated television as a habitual part of their food cultures."

According to the Henry J. Kaiser Foundation, American children now watch 38.5 hours of television per week – essentially a full-time job. That’s a real travesty, and it’s one where parents can easily intercede. They can regulate the number of hours watched and can often lock out certain channels for when they’re not at home. They can also keep TVs out of the bedroom. Almost 40 percent of children have a television in their own rooms. Those children watch more TV (an extra 4.6 hours per week) and, yes, according to this study, they are also fatter. Finally, parents can show moral authority by limiting their own TV consumption.

To be sure, measures – voluntary or otherwise – to reduce the amount of junk food advertising aimed at kids would almost certainly have a salutary effect. If a broadcaster can decide that Mickey Rooney’s octogenarian buttocks shouldn’t be shown on TV – as Fox just did – it can decide to limit certain types of commercials at certain hours. Indeed, Kraft Foods has just volunteered to do so. Meanwhile, nations such as Sweden, Finland, and Norway have taken draconian measures to limit food ads aimed at kids. (Whether that would withstand Supreme Court scrutiny in the United States is anybody’s guess.)

But a more comprehensive approach wouldn’t stop with advertising; it would seek to limit the amount of time that kids spend watching any kind of TV. Such an approach wouldn’t just help to reduce childhood obesity; it would also address other problems – of the educational and intellectual variety – that television causes.

The problem, of course, is that the television is almost as sacrosanct to Americans as the Imam Ali Mosque in Najaf is to the Shia. And you’re not going to see a CSPI campaign against irresponsible parents, because the group is only interested in attacking corporate America. CSPI may be able to shame some companies into changing their advertising practices, but no problem was ever solved by cutting it off at the leaves; it has to be struck at the root. Or in this case, at the remote control.