The arson that damaged or destroyed 26 houses under construction near a wetlands area in Maryland apparently was not ecoterrorism. But no wonder this was the first suspicion, considering the torch remains the primary weapon of America’s greatest domestic terror threat – and one the media greatly ignore.

During the past several years, according to the FBI’s most recent report on "Terrorism in the United States," "the violence and destructive activities perpetrated by animal rights and environmental extremists in the United States and elsewhere have increased in frequency and intensity."

During Senate testimony last May, FBI Deputy Assistant Director for Counterterrorism John E. Lewis said the two main ecoterror groups – the Animal Liberation Front and the Earth Liberation Front – have committed more than 1,100 criminal acts since 1976, resulting in damages estimated at $110 million. He called them, "the most active criminal extremist elements in the United States."

According to the American Legislative Exchange Council in Washington, D.C., the ELF or ALF attacked sites in 20 states in 2003 including arson, bombings, destruction of biotechnology labs, damage to genetically modified food crops and freeing of livestock.

The ALF claims it’s devoted to ending abuse and exploitation of animals. That’s you if you’ve ever eaten a hamburger, had a glass of milk, or worn leather shoes. You’re an exploiter if you’ve ever popped a pill, since all drugs are tested on animals.

The ELF specifically calls for the destruction of laboratories and research facilities that use animals for scientific study, fur farms, horse ranches, meat-processing plants, and anything associated with the logging industry.

"Arson has increasingly become the means of trying to achieve their goals," says Arnold. "It’s easy and it’s frightening. Almost every human responds viscerally to fire. It does what terrorism is supposed to do; it terrorizes.

A sampling of ecoterror arsons: 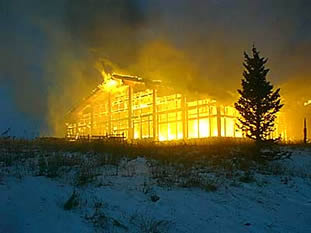 Arnold says it would be dumb to consider the perpetrators stupid. "These people tend to be really bright," he told me. "But these hotheads are naïve and usually quite young." In 2001 three people were convicted of a series of house torchings on Long Island, New York; the oldest was merely 17. "I think they have an urge to do good and are seduced by the Dark Side," says Arnold, meaning the ecoterror cadre or recruiters.

Unfortunately, he says, all too many people – including many in the mainstream media – treat these firebrands as heroes.

Until fairly recently, ecoterror wasn’t a hot issue because "Nobody believed environmentalist would do such things," says Arnold. "They believed that nature was harmless and therefore anybody who allegedly defends nature is harmless. The media were as gullible as anybody."

Importantly, the ecoterrorists claim that not a single person has so much as injured in one of their fires, a claim the media parrot. But, observes, Arnold, "We actually don’t know how many people have been hurt or killed in ecoterror arsons because they always wait a few days before sending a notice of responsibility."

But even if they haven’t killed yet, the day must come. "Much like terrorist groups of the past, animal rights and environmental terrorists are adopting increasingly militant positions with respect to their ideology and chosen tactics," says the FBI report. These people burn with hate. "I cheered when the plane hit the Pentagon" on September 11 said an ELF member in a Details magazine interview. Another added, "Anyone in their right mind would realize the United States had it coming."