t was the "Summer of the Shark." In 2001, massive numbers of hapless swimmers were shredded up and down U.S. shores. Or so the media told us. Turns out there were 11 fewer U.S. shark attacks than the year before. The hysteria only ended in September, when the nation got some truly scary news. 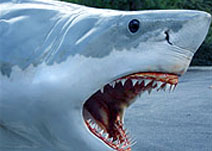 "We’re sick and tired of media stereotyping and we’re not going to take it anymore!"

But as 9/11 fades from memory, shark attack stories are back – with a twist. The media have combined them with another bit of nonsense it consistently promotes with the ominous name of "The Dead Zone." Shark attacks and a dead zone, oh my! Good thing it’s all a fish story.

Every year during summer an oxygen-depleted area forms in the Gulf of Mexico where the Mississippi River Basin empties. This depletion is called hypoxia.

The zone waxes and wanes annually. If it’s larger than the year before, the media make sure you know it. If it smaller, they make sure you think it’s grown larger. Thus CNN.com’s recent headline: "’Dead Zone’ Spreads across Gulf of Mexico." Nowhere does it say it spread considerably less than previously.

Now, since nature herself would never do anything bad – aside from earthquakes, hurricanes, tornadoes, tsunamis, volcanic explosions, and minor stuff like that – we know the Dead Zone MUST be man-made. The most-often fingered culprit is fertilizer run-off from farms that goes into Mississippi basin rivers, creating algae blooms that soak up virtually all the oxygen within the zone. And the sharks?

Well, the Dead Zone is to Louisiana marine biologist Nancy Rabalais what the Redcoats were to Paul Revere. But for the one, nobody would have heard of the other. Rabalais originally publicized the hypoxic area, she measures it, she crusades against the horrible farmers and fertilizer companies she claims create it.

And the environmentalists love her for it, giving her accolades and cash awards that would send most people into a feeding frenzy. This includes the San Diego Foundation’s 1999 Blasker Award complete with check for $250,000. (The 2002 winner only got $47,000 but he was merely working on bioterror defenses against anthrax.)

Imagine Rabalais’ panic then, when the National Oceanic and Atmospheric Administration (NOAA), which had given her its 1999 NOAA Environmental Heroes Award, announced the zone this summer will remain "about the same size as it has been since 1990." (Actually, it’s only about two-thirds the size this year as in 2002.)

So panic led to gimmick. Playing off a small shark scare in Texas, Rabalais told reporters: "The higher number of sharks in shallow waters may very likely be due to the low oxygen being close to the shore at the time of the attacks." So the Dead Zone no longer threatens just mollusks; it now threatens man.

Except that "Sharks are not more numerous or more aggressive than usual," according to Tom Harvey, spokesman for the Texas Parks and Wildlife Department in Austin. He told a local TV station, "They are not ’coming in’ to shore more than usual. We’ve had two attacks within a week or so, and that is unusual, but what we’re seeing is probably more of a media frenzy than a shark feeding frenzy."

Further, why would this year’s much smaller hypoxic zone be triggering shark movements that previous much larger zones did not? Such logic escaped CNN, Reuters, BBC, and other media outlets that eagerly swam with the Rabalais story.

But while Rabalais’ shark theory has no teeth, neither does her Dead Zone cause cèlèbre, for a variety of reasons.

One is that hypoxic zones occur all over the world in places where there is no fertilizer run-off. "There are millions of square miles of ocean that are naturally hypoxic," Derek Winstanley, chief of the Illinois State Water Survey in Champaign told me, "including the whole of the Pacific Ocean offshore from the Canadian-American border to Chile."

This isn’t to say fertilizer can’t contribute to hypoxia, but there are many nitrogen sources for Mississippi basin rivers. These include municipal wastewater plants, and industries along the rivers.

Further, while measurements of the Gulf’s oxygen content only began in the 1970s, it appears to have varied dramatically over time. Sediment analyses indicate hypoxia zones there dating back at least a century, long before the widespread use of chemical fertilizers or any other source of man-made nitrogen.

There’s also no connection between how much fertilizer is used on farms in the Mississippi basin and the size of the hypoxia zones. On the other hand, a better measurement is how much nitrogen runs off into the water (where it dissolves into "nitrate") in a given year because of weather conditions. But again, there’s a complete disconnect. 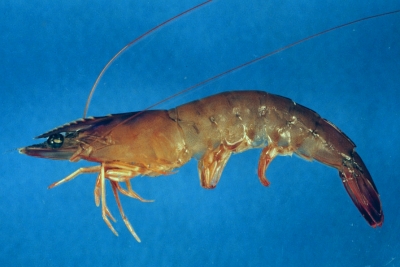 The waxing and waning of the so-called "Dead Zone" has had no impact on Louisiana’s vital shrimp industry.

For example, according to Rabalais’ own figures dating back to 1985, the largest zone was in 2002. Yet while the highest average and the highest peak nitrate concentrations were in 1993, in five subsequent years the hypoxia zone was larger. All this aside, it’s debatable that the hypoxia zone is even harmful.

According to a highly influential Science magazine article back in 1998, "Environmentalists and some scientists are convinced that the zone . . . heralds the imminent collapse of Louisiana’s valuable coastal fisheries." Presumably, hypoxia wouldn’t have much effect on fish that could readily swim away but would have tremendous impact on slower creatures like the shrimp that are so vital to Louisiana’s economy.

Yet NOAA data for the Louisiana brown shrimp caught in the Gulf, which excludes those taken from inland waterways where there’s no hypoxia, show the catch in 2002 was higher than in the three years before 1998. Further, just as there is no correlation between nitrate in the Mississippi basin and the size of the hypoxic zone, neither is there any correlation between the size of the zone and the shrimp catch. In short, there is no evidence that hypoxia is hurting fisheries.

Nevertheless, to deal with the predicted devastation, the Committee on Environment and Natural Resources of the Office of Science and Technology Policy in 1999 released a draft report that relied heavily on the research of a certain celebrated Louisiana marine biologist. It urged a 20% cutback on fertilizer use by perhaps half of all American farms, along with converting 5 million acres of some of the world’s best farmland to swamp, er, uh, wetlands.

And the dollar cost? If you think a shark attack is scary, how about this: $4.9 billion a year.

By the time the final report came out a year later, reality had already begun to sink in and those recommendations were gone. Now the EPA has taken charge and its current plan seeks to reduce the hypoxic zone by two-thirds of the current size by reducing total nitrogen concentrations in the Gulf by about 30 percent. Sanely, it doesn’t single out (or even make specific mention of) fertilizers. But the estimated cost would still be a frightening $1 billion a year for at least five years, according to the industry journal Methanol and Nitrogen.

But who knows what would happen under a Kerry Administration. Nancy Rabalais as EPA administrator? The imagination swims.