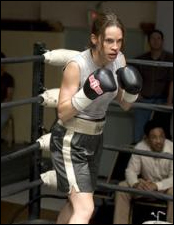 "Maggie" could have led a fruitful and enjoyable life.

If you’re still planning to see the Oscar-winning film "Million Dollar Baby" and don’t know the ending – turn to the funny pages now! I’m giving it away. Maggie, played by Hilary Swank takes a massive blow in the boxing ring and is left a quadriplegic on a respirator. After she repeatedly pleas to her crusty (but loving) aging manager Clint Eastwood to be allowed to die he finally complies both by "pulling the plug" and giving her a lethal dose of adrenaline. Disability advocates claim the movie was a pro-euthanasia message. Certainly by law Swank could have simply asked her doctor to take her off life support. Instead, Eastwood’s character breaks the law in bypassing the doctor and changing the action from passive to active. That does sound like a message.

John Kelly of Boston calls the film "a lie." He’s not a film critic, but he knows something about the subject. "When I was 21 I was sledding on a piece of cardboard down a hill and a tree jumped up in front," he told me. He’s now paralyzed from the neck down. "I’m everybody’s worst nightmare," he says chuckling.

Now 41, Kelly is one of the approximately 11,000 new spinal cord injuries in the U.S. each year. Of these, about a fifth lead to quadriplegia. But technology continually makes it easier for such persons to lead enjoyable and productive lives.

Mobility is vital and at a single website you can find 55 different models of power wheelchairs, the descriptions of which resemble sports car reviews. They discuss horsepower, speed, turning radius, how high an object they can surmount. One has "Six wheels on the ground [to] provide superior stability and a smoother ride," while another has tank-like treads for off-road driving. The iBOT wheelchair climbs and descends stairs.

Communication is also vital, aided now by tremendously-improved voice-activated software. It allows writing books, surfing the web, using the phone, and – O, joy! – even paying bills. Voice-activated e-mail allows quadriplegics the same opportunity to read and write letters and receive spam as the rest of us.

All of these technologies were invented or vastly improved since Christopher Reeve’s accident. Moving higher up the tech ladder, new "functional electrical stimulation" (FES) devices implanted in the body can restore some hand movement and allow those with spinal cord injury (SCI) to feed themselves. Maggie could have used an FES that assists with breathing, freeing many quadriplegics from the ventilator.

We’ve also greatly improved our knowledge of physical rehabilitation for recently-injured persons. "If I could have talked to Maggie," says Kelly, "I’d say ’We’re going to take you to a real rehab center with other people with spinal cord injuries and a gung-ho staff to help with physical therapy as well as being able to treat your depression.’" 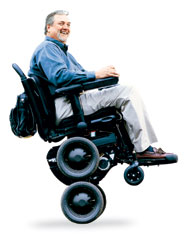 Those who work with the disabled talk guardedly about "a cure." Research showing partial regeneration of injured rodent spines from adult stem cells goes back a decade, and is now undergoing human testing. Others have used mature Schwann cells from the brain to regenerate animal spinal tissue. Yet for those with older injuries, even complete spinal regeneration would require tremendous rehabilitation to get atrophied body parts moving again says Marcie Roth, executive director of the National Spinal Cord Injury Association. Roth thinks many SCI patients wouldn’t find it worthwhile. "These people have grown accustomed to their lives and many wouldn’t want to change them," she says.

After his accident, Kelly got a master’s degree in sociology at Brandeis University. "I can do lights, appliances, air conditioning, make phone calls, and control the television." He says, "Sometimes I watch TV and work on the computer at one time like any multitasking American and it’s fun! I go shopping like anybody else. I really enjoy cooking. I enjoy music and can control my stereo (a jukebox-type variety that holds hundreds of CDs) with my wheelchair."

Adds Kelly, "It’s annoying to have to say my life is good in order for people to stop thinking I’d be better off dead. But I love my life and everything in it," he says.

Maggie might have ended up feeling the same way – if only the script hadn’t killed her off.