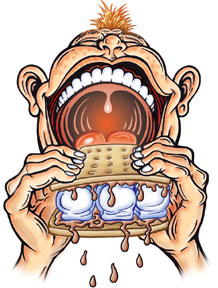 Since I’m the author of the first book warning of America’s disastrously growing weight problem and have helped popularize the term "obesity epidemic," you probably think I support Medicare’s decision to essentially classify obesity as a disease so that it can spend money on treatments. Well, you’re probably wrong.

This is just an opportunity for the diet industry to get fatter, for the already-anorexic Medicare fund (government health insurance for the elderly) to grow even thinner and for "horizontally challenged" seniors to remain so.

The problem is the nature of the beast, the intractability of obesity. If preventing or treating it were as simple as "regularly taking long walks and keeping your mouth shut," as Rick Berman of the Center for Consumer Freedom told a reporter, two-thirds of us wouldn’t be overweight. The CCF is funded by restaurants and food and beverage companies whose advertising and T-Rex-sized food and drink portions encourage us to cram our craws with the most caloric stuff on earth.

On the other hand, personal responsibility cannot be ignored. After all, somehow a third of us have managed to stay thin. While Big Food encourages gluttony, I’ve yet to see a Keebler elf threaten somebody’s life if he didn’t down another E. L. Fudge Peanut Butter Double Stuffed Sandwich Cookie. Nor can you blame the industry for the American Way of Sloth.

And don’t even think of blaming genes. They might have a slight impact on individuals, but genes didn’t turn us into the United States of Adiposity.

Significant and permanent weight-loss is achievable, as the ever-growing 4,000-member National Weight Control Registry%20) shows. These people have lost 30 pounds or more and have kept them off for at least one year. The question is: How can Medicare help?

Well, the cheapest program would be to buy all fat seniors a paperback diet book. No, diet books don’t work; I just said it would be cheap.

Then there are commercial plans. A 2003 study in the Journal of the AMA found that after a year dieters on one such plan had lost significantly more weight than a comparison group relying strictly on self-help. But after two years, the difference was almost gone.

Not for nothing do major companies like Jenny Craig and LA Weight Loss Centers keep no records of long-term results. And have you seen former Jenny Craig spokeswoman Monica Lewinsky lately?

Further, most commercial plans essentially operate by selling members pre-portioned food – at extraordinary prices. Should Medicare be paying for meals? 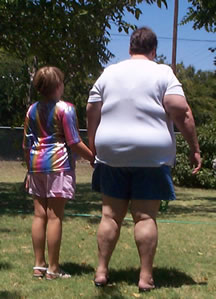 Elderly obesity is serious, but what can Medicare do about it?

Of course stomach reduction or "bariatric surgery" does work. And it’s reserved only for the direst cases, right? Not exactly.

Such surgery has increased eight-fold during the last 11 years because more people (including the parents of obese teens and children) no longer see it as a last resort. It’s terribly expensive, at $15,000 or more a pop. And while it’s clearly the most successful method of long-term weight-loss, it’s no panacea.

Bariatric surgeons seem reluctant to publish detailed results, but some who did reported that while 90 percent of their patients lost a fourth of their excess poundage, only 8 percent "attained normal weight." Further, some weight regain is almost inevitable because what remains of the stomach stretches and people often compensate for smaller stomachs by eating more frequently.

Pills? It’s rare to lose more than 5 percent to 10 percent of your weight with them. Ultimately only drugs will end the epidemic, but it’s hard to find an area of medical research that has produced more failures and there’s nothing exciting on the horizon.

Meanwhile, Medicare spending is busting its own pant seams. Partly because of the new drug coverage adding an estimated $534 billion, outputs from the taxpayer-funded portion have already begun exceeding revenues. What will happen if we expand coverage even further?

All that said, a study in Obesity Research this year pegged annual U.S. obesity-attributable medical expenditures at $75 billion with Medicare and Medicaid (health insurance for low-income people) paying half the tab. So when we do get effective treatments, some form of Medicare coverage might actually pay for itself. But until then, expanding the coverage an already-overextended program will do nothing to prevent elderly waistlines from expanding.