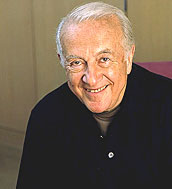 "Low-Carb Diets and Lower Journalistic Standards." Nobody used that headline to describe the reaction to a pair of new studies on the controversial Atkins diet, but they should have. And the deception was global.

Yet there were some dissenters, such as "Study Casts Doubt on Advantages of Atkins Diet" (MSNBC.com), and "Losses on Low-Carb, Low-Fat Diets Equal in Yearlong Studies" (San Francisco Chronicle).

Rodney King, the Great Reconciler of the 1992 LA riots might ask: "Can’t we just all get along?" Sorry. Somebody is clearly in the wrong, as you can quickly discern if you read them yourself in the May 18, Annals of Internal Medicine at: http://www.annals.org/content/vol140/issue10/index.shtml.

Atkins dieters lost significantly more weight over a six-month period compared to low-fat dieters in a Duke University study. This would merely confirm what Atkins critics say – that a low-carb diet can induce quick (if only temporary) weight loss. Insofar as the Atkins Foundation paid for the research, it might also help answer the question in the subtitle of Tufts University Professor Sheldon Krimsky’s book: Science in the Private Interest: Has the Lure of Profits Corrupted BioMedical Research? 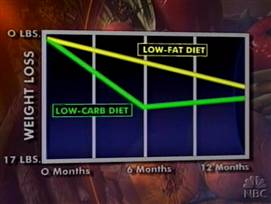 As this graph taken directly from the Philadelphia study shows, the more time progresses the worse Atkins dieters do.

The other study, conducted at Philadelphia Veterans Affairs Medical Center and government-funded, compared Atkins dieters to those on a conventional (moderate fat) diet but continued for a full-year. It found "no significant difference in overall weight loss between persons on these two diets." It included a graph worth the proverbial thousand words showing Atkins dieters regaining weight at the six-month mark while, as the study noted, "those on the conventional diet continued to lose weight." Since reading the studies was obviously not a prerequisite to writing about them, it’s hardly a wonder that the Atkins-lauding Times of London piece falsely reported that in both of them the comparison groups were on a low-fat regimen. Nor is it remarkable that United Press International made the same claim, insofar as it admitted it based its entire story, "Two Studies Favor Atkins Diet," on that of the Times!

And far be it for anybody to do the least bit of outside research, so that many outlets declared, as did the Times, that "The results surprised the (Duke) team." This might blunt suspicion that being financed by Atkins (as they have been for several years) influenced them.

But just how "surprised" could the Duke researchers have been when they have released similar findings time and again at medical conferences and in the American Journal of Medicine in July 2002? There they concluded: "A very low carbohydrate diet program led to sustained weight loss during a 6-month period."

Britain’s prestigious New Scientist headlined "Longest Scientific Study Yet Backs Atkins Diet," obviously referring to the Philadelphia VA one. But not only didn’t it "back Atkins," neither was it the longest. Another 12-month study of the diet appeared last May in the America’s most prestigious medical journal with similar results. Specifically, "The low-carbohydrate diet produced a greater weight loss than did the conventional diet for the first six months, but the differences were not significant at one year."

All of this tells us something about low-carb diets and a lot more about the ignorance and arrogance of the media.

"Americans," it said, "think journalists are sloppier, less professional, less moral, less caring, more biased, less honest about their mistakes and generally more harmful to democracy than . . . in the 1980s."

Then again, what percentage of reporters and editors actually care what the public thinks?