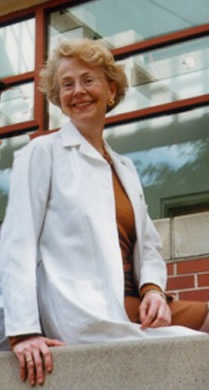 Denise Faustman just wants a crack at curing diabetes.Harvard researcher Dr. Denise Faustman thinks she can cure type 1 (or juvenile) diabetes. She’s done it in mice and wants to try it on humans. She’s gotten financial backing from the Lee Iacocca Foundation and other groups, but needs millions more. But she isn’t going to get it from the world’s largest diabetes foundation, Juvenile Diabetes Research Foundation International, for reasons having little to do with the potential of her work.

But first, meet the enemy – and its possible nemesis. Type 1 diabetes is an autoimmune disease, meaning the body is attacked by its own immune system. In this case, white blood cells destroy the insulin-producing islet cells of the pancreas. Without regular injections of insulin and control of blood sugar, the organs fail and blindness and death follow. From 850,000 to 1.7 million people in the U.S. are thought to suffer from type 1.

There is only one treatment to date, with little chance it could be of widespread use. Called the Edmonton Protocol, after the Canadian city in which it was developed, it requires islet transplants from cadavers. About half of the original patients remain insulin-free after more than a year, which means half don’t. Further, they must take risky immunosuppressive drugs to prevent transplant rejection. Finally, it’s so expensive that only about 350 patients have been treated so far.

Ultimately no treatment of type 1 can be permanent if the pancreas remains under siege. "It doesn’t matter if you have a big vat of [new islet] cells," says Faustman, "you still have to deal with the underlying disease."

So Faustman gave severely diabetic mice a cheap generic drug that stimulates the immune system, causing the release of a protein called tumor necrosis factor. TNF kills activated white blood cells. As she hoped, the attack on the islet cells stopped. Then, to her astonishment – and that of the medical world – the islet cells regenerated.

The explanation, Faustman believed, lay in stem cells from the spleen. Long considered a dispensable organ, the spleen is a rich source of non-embryonic stem cells (also called "adult stem cells") that may be as pliable as embryonic stem cells are claimed to be. In 2003 Faustman and colleagues confirmed this in a study appearing in Science magazine. They gave male spleen cells to female mice and sure enough the regenerated islets had the male Y chromosome.

Iacocca began his foundation in 1984 after his wife died of complications from diabetes.

Of course, mice aren’t little people. But there appear to be no significant differences between mouse and human endocrine systems. Indeed, "The same cell pathway that is defective in a subset of mouse white blood cells is now known to be defective in type 1 diabetes, human lupus and human Crohn’s disease," Faustman told me. Like type 1, these are autoimmune illnesses.

"In my view this is the most promising research currently and certainly worth pursuing," says Larry Raff, President of the Autoimmune Disease Research Foundation. Scientists I interviewed, such as University of Kansas stem cell researcher Kathy Mitchell, agreed. Raff is particularly excited because so many autoimmune illnesses other than diabetes may be treated or cured with Faustman’s method.

Aside from her prestigious academic position, Faustman’s credentials are impeccable. She has authored or co-authored over 100 published papers, reviewed JDRF grant requests, and chairs the board of the Society for Women’s Health Research.

Yet the JDRF, which awarded at least $85 million in grants last year and has funded three-fourths of the Edmonton surgeries, won’t give Faustman a penny. It has rejected her clinical trial applications three times. I asked why but JDRF representatives refused to be interviewed, specifically citing my writings on the benefits of adult stem cells.

That’s not particularly surprising, considering JDRF seemingly cares more about ESC research lobbying than it does diabetes – as I will document in my next column. This antithesis to non-embryonic stem cells also appears to explain Faustman’s rejections. If the cure uses adult stem cells, apparently JDRF doesn’t want one. But you can support Faustman’s work through www.joinleenow.com, www.cureautoimmunity.org, or www.reachforthecure.org.

In a recent TV commercial, JDRF International Chairwoman Mary Tyler Moore proclaimed, "We are so close to finding a cure." "We" aren’t, Ms. Moore. But Faustman may well be.