Issue settled. The Atkins Diet – the famous high-fat, low-carb regime that lets dieters load up on pork rinds and Scrapple as long as they avoid potatoes and Wheaties – works. The American Heart Association has been wrong all along, as has essentially the entire American medical establishment. Not only is gorging on fat the key to becoming thin, it’s heart-healthy to boot. So say the headlines:

• "High Fat, Low Carb Diet May Finally Be Getting Its Due" (CNN) 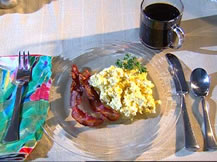 The public responded predictably to the pro-Atkins results of an Atkins-funded study last month. Sales of Dr. Robert Atkins’ diet book skyrocketed over 900 percent on Amazon.com the day the news broke. Dr. Atkins’ New Diet Revolution has now sold over 10 million copies; according to one Atkins stooge, more than 20 million people have signed on for the diet. Celebrities ranging from callipygian lovelies Jennifer Lopez and Minnie Driver to formerly porky Spice Girl Geri Halliwell to one-man body mass rollercoaster Matthew Perry have reportedly taken the Atkins plan straight to the scales.

And they’ve all been sold one greasy fat bill of goods.

There are two issues here. One is the effect of the Atkins diet on weight loss. The other is its effect on cholesterol and triglycerides, a group of fatty compounds that circulate in the bloodstream and are stored in the fat tissue.

In the study in question, Dr. Eric Westman of the Duke University Medical Center looked at both. He followed two groups of 60 dieters each, one on a high carbohydrate diet and one on the high-fat, low-carbohydrate Atkins diet. He reported that the Atkins group lost twice as much weight during the six-month study period as did the high-carb group. But this is both unsurprising and meaningless.

Gary Foster of the University of Pennsylvania co-authored a study conducted in virtually the same manner as Westman’s. Foster, whose work will soon appear in a major medical journal, provides a simple explanation for the Atkins weight loss. The regimen "gives people a framework to eat fewer calories, since most of the choices in this culture are carbohydrate driven," he says. "Over time people eat fewer calories." 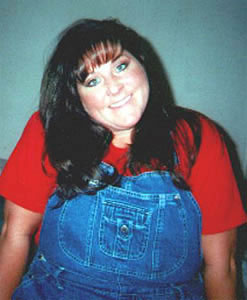 This is an Atkins devotee who posted her photo on the web. No, this isn’t the "before" photo; it’s the "after" photo!

Randy Seeley of the University of Cincinnati co-authored yet another "sister study" with similar results. His explanation is the same as Foster’s. Ultimately, Atkins is nothing more than a low-calorie diet in disguise.

In any event, the main issue with any diet – be it Atkins, popcorn, or jelly bean – isn’t whether people can lose weight in the short-term but rather whether they can stick to the regimen and keep the pounds off not for just half a year but essentially forever. Yet completely lost in the media mania was that among the 60 Atkins dieters in the Westman group analyzed for weight loss, there was a sixty percent dropout rate among the 60 Atkins dieters.

Thus almost half the Atkins cohort couldn’t stay with the steak and bacon routine for even six months. By comparison, only 25 percent of the high-carb eaters dropped out.

Moreover, it’s generally accepted that drop-out rates anywhere near this level completely invalidate a study because you don’t know how all those drop-outs would have affected the result. Maybe those Atkins dieters were quitting not only because of carbohydrate cravings but also because they weren’t losing weight or losing it fast enough to satisfy them.

Why would Westman’s interpretation be so different from those of Foster and Seeley? It may help to know not only that this particular study was paid for by the Atkins Center, but that it’s part of a long-term funding arrangement.

Analyses such as one published in the New England Journal of Medicine (NEJM) in May 2000 have shown that funding sources do in fact influence study results and the interpretations (or "spin" if you will) of those results. "When the boundaries between industry and academic medicine become as blurred as they are now, the business goals of industry influence the mission of medical schools in multiple ways," declared an accompanying NEJM editorial.

Westman’s interpretation, based on his handful of subjects observed over a mere six months, also directly contradicts three decades of studies published in peer-reviewed journals. A review of over 200 of these published last year in a major medical journal concluded bluntly: "The BMIs [a surrogate measure of weight] were significantly lower for men and women on the high carbohydrate diet; the highest BMIs were noted for those on a low carbohydrate diet."

But what about the blood findings? Wasn’t it a real shocker that Atkins dieters consuming heavy amounts of fat saw their HDL ("good cholesterol") levels increase by 11 percent while harmful triglycerides fell 49 percent? (LDL or "bad cholesterol" levels remained the same.) 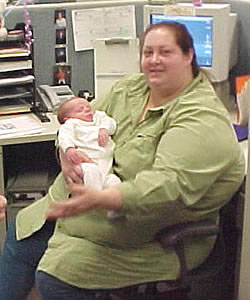 Here’s a woman who swears by the Atkins diet, but weighs in at 335 lbs. Not for nothing has Atkins been called a "cult."

"Often just losing weight alone will cause improvement in triglyceride and cholesterol levels," the president of the American Heart Association Dr. Robert Bonow told me. Since the Atkins dieters did lose more weight than those on the high-carb diet, it only stands to reason that by comparison their blood levels would also improve more.

Says Seeley, Westman’s "weight loss data look just like ours and my argument is that the weight loss accounts for the beneficial effects."

Westman told me that he doesn’t believe this to be the case, because another study, in the July 2002 Journal of Nutrition, claims to have found a similar improvement on an Atkins-type diet regardless of weight loss. But the same researchers, using the same group of dieters, published another study at the same time reporting that the Atkins dieters lost an average of 7.5 pounds over a six-week period. So again, blood fat levels merely fell with body fat levels.

Ultimately this fat-fest over a single study shows nothing more than the media’s amazing ability to pick out and flaunt a will o’ the wisp – even to the point that one American network repeatedly used on-the-air interviews from a representative of the Atkins Institute to interpret a study paid for by the Atkins Institute!

Why? Our increasingly obese population is desperate for some magical formula to avoid the physiological law that body fat is determined by calories in and calories out. The media tried to fill the need, but ultimately failed the public. "It just makes people confused and frustrated," an exasperated Seeley said. Yes, and fatter by the day.