If you think capitalism works perfectly, you’re awfully naive. But if you think free market operations beat the pants off state-run ones, you’re right. Case in point: one of South America’s largest smelter and refinery facilities in La Oroya, Peru.

In 1974, the Peruvian government took the facility, now more than 80 years old, from an American company. Under nationalization it continued to produce lead, gold, silver, copper, zinc and other metals. 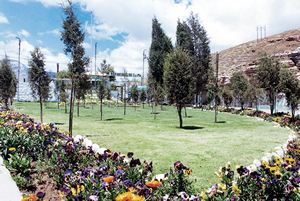 La Oroya is hell no more.

It produced something else as well – disease and death. In 1994, an American environmentalist told Newsweek magazine the metallurgical project was "a vision from hell." The dust was filled with lead and arsenic, while a river running through the facility contained lead levels six times the World Bank limit.

All of this was ending up in the bodies of the workers, their wives, their children and their neighbors. Almost 100 percent of the children in La Oroya suffered excessive blood-lead levels.

Finally in 1997 the government sold this nightmare back to the gringos, the Missouri-based Doe Run Company which also produces metal products in North America and Africa. As part of the deal, what’s now called Doe Run Peru promised to quickly begin a massive cleanup called the Program to Administer and Maintain (improve) the Ambient (environment), or PAMA.

After six years, the improvements are remarkable.

While originally required to spend $107 million to execute the PAMA, DRP chose to increase that to $174 million. More than half the PAMA projects had been completed by the end of 2002.

Arsenic in the air has declined by about a fifth between 1997 and 2003 while lead levels have fallen over 50 percent. Total discharges into the area’s two rivers have been cut by more than half, and the amount of dissolved lead in the water has fallen by about 80 percent. Yet the facility produces 10 percent more metals now than it did when DRP took over.

While 79 reportable accidents occurred in 1997, there were fewer than 10 last year. Worker blood lead levels have dropped by 28 percent, so that the average is now well below U.S. limits.

Unfortunately, there’s little historical data on blood lead levels in children because tests were conducted differently each time, leaving apples-to-oranges comparisons. But there was an 18 percent drop just from 2000 to 2001 among a select group, essentially the result of a DRP pilot program to teach area residents better hygiene such as washing hands and bathing more frequently. 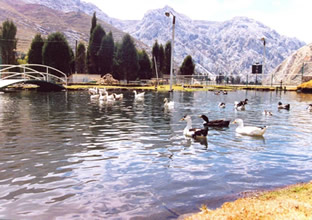 Six years ago, these geese would have been wearing gas masks.

But sadly just as environmentalists rightly complained about the La Oroya facility when it was state-run, now groups with names like EarthJustice and the InterAmerican Association for Environmental Defense are playing DRP as the villain. Yet all they are really claiming is that the place isn’t yet as clean as grandma’s kitchen floor.

Indeed, one influential activist publication is called "La Oroya Cannot Wait." But to some extent it must. Just as fad diet followers discover you can’t really lose 30 years of accumulated fat in 30 days, you can’t clean up decades of filth from government mismanagement in just a few years.

With the backing of the municipal council and already one of the largest unions, DRP recently announced that some improvements scheduled for 2006 would indeed be pushed back five years. But it’s also going to invest another $226 million in cleanup operations, close part of an especially dirty zinc plant and delay a planned sulfuric acid plant to further cut sulfur dioxide emissions.

The company is always balancing the costs of cleanup with the responsibility to stay profitable. That’s how it could pay the Peruvian government almost $6 million in taxes in 2003, with a $44 million payroll for DRP’s 3,100 La Oroya employees. These are some of the highest-paying jobs in the region and 75 percent of the workers are unionized.

Further, while green groups would have us think cutting toxic exposure is a simple matter of cutting emissions, lead is to La Oroya what sand is to South Beach. Like sand, it gets into everything – and everybody. It would do so even if there were no smelter.

DRP’s operations, however, are bringing health, wealth and hope to a terribly impoverished people. But while state-run companies can run losses forever; capitalist ones cannot. The activists don’t realize this; believing that through some form of alchemy DRP can just keep pouring in the money and eliminating profitable plants.

But the only magic they’ll accomplish is making DRP vanish. Trying to shake out too many eggs from DRP too quickly just may kill this gold-producing goose.