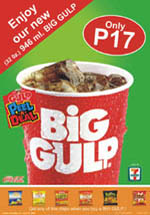 Now we can all afford our own personal swimming pool.

OK, so nobody ever said that soft drinks were a health food. But a much-discussed new Harvard study asserts that in addition to the bad things we already know about them, they may be directly contributing to the nation’s diabolical diabetes increase. Published in the Aug. 25 issue of the Journal of the American Medical Association, it analyzed diets of about 50,000 female nurses. It claimed to have found almost double the risk of type 2 diabetes (formerly called "adult-onset") among those who consumed one can of non-diet soda daily compared to "soda-totalers" or those who drank diet soda.

The response from the beverage industry and its paid minions, such as the D.C.-based Center for Consumer Freedom, was both misleading and downright embarrassing. CCF essentially just smeared the authors by finding any association they could between them and Michael Jacobson’s anti-corporate Center for Science in the Public Interest. But pro-corporate CCF is just CSPI’s flip side – science for sale but to different bidders.

CCF also represented the Harvard study as asserting soda consumption was the main cause of diabetes in women, while the American Beverage Association adamantly declared: "No one food increases the risk for type 2 diabetes." Yet the researchers made neither claim. Nevertheless, what they did claim has serious problems. Primarily, after adjusting for differences between women other than soda consumption, including weight and lifestyle factors, there was only a small increased risk for those drinking sugared sodas. Add to this other recent studies finding no direct soft drink-diabetes or sugar-diabetes connection – including one co-authored just last year by one of the Harvard authors – and the results go from being as clear as Sprite to as murky as Pepsi.

Yet we can still say that sugary soft drinks cause diabetes. That’s because they clearly contribute to obesity and obesity causes diabetes. Per-person consumption of soft drinks has increased an amazing five-fold since just half a century ago, and has doubled since the obesity epidemic began to take off in the mid-70s. We now average about 38 gallons of so-called "liquid candy" per year, the equivalent of 400 12-ounce cans. That doesn’t include diet sodas.

The original Cokes were 6.5 ounces, then 12, and are now 20-ounces in machines and can be bought in 64-ounce cups from convenience stores. The cup lids, originally designed to keep the drink from spilling out, now serve to keep drinkers from falling in.

About 10 teaspoons of sugar is packed into a soda, providing anywhere from 140 calories in a 12-ounce can of 7-Up to 180 in Minute Maid Orange Soda. In fact, carbonated drinks are the single biggest source of refined sugars in the American diet.

Americans consume an average of half a pound of sugar daily. And it shows.

They are also the fifth largest source of calories for adults. One recent study directly correlated the amount of sugared-sodas children drank and their fatness, while finding no such association with diet soft drinks. Nobody says bubbly drinks are the sole cause of the nation’s epidemic of bubble-shaped butts and guts. But it’s stupefying that CCF can say of something that adds about 60,000 empty calories to our diets yearly: "Soda Still Doesn’t Cause Obesity."

All that’s left, then, is the diabetes connection. The increase in diabetic prevalence has closely tracked the obesity epidemic. Since 1980, the incidence of type-2 diabetes more than doubled, according to the federal Centers for Disease Control and Prevention, and now represents about 5 percent of the total population. Stunningly, about half that increase has come in just the last five years.

And no, it’s not just a big fat coincidence. Study after study has found the road to diabetes is paved with calories. "Fifty-six percent of the cases of diabetes in this cohort could be attributed to weight gain greater than" about 15 pounds, according to one appearing this past June.

None of this is a call to put your soda cans on the garage shelf alongside the rat poison. Try switching to artificially-sweetened sodas and you’ll probably soon find sugared ones taste like fizzy maple syrup. Alternatively, you can make sugary sodas the rare treat they once were. But don’t be a soda jerk and think that one soft drink daily is worth three injections of insulin.