It “may be the greatest medical breakthrough in our or in any lifetime: the use of embryonic stem cells,” Ronald Reagan Jr. told enthralled listeners at the Democratic Convention. These cells could “cure a wide range of fatal and debilitating illnesses: Parkinson’s disease, multiple sclerosis, diabetes, lymphoma, spinal cord injuries, and much more.” 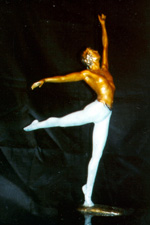 "I may not know much about stem cells, but watch this!"

Yet “There are those who would stand in the way of this remarkable future, who would deny the federal funding so crucial to basic research,” he warned, concluding we must “cast a vote for embryonic stem cell research” on election day.

Now why would the Democrats choose RR Jr. to deliver this speech? Heretofore, his only recognized expertise was in ballet. He never pretended his medical knowledge went further than perhaps watching General Hospital as a youth.

The reason, naturally, is that RR Jr. is not only the son of a conservative Republican President, but of one whose disease we’re told could one day be cured with ES cell therapy. How utterly delicious!

Liberal, pro-Kerry columnist Richard Cohen accused RR Jr. of “grave robbery,” not so much for exploiting his father’s name but for doing it so cynically. After all, RR Jr. is a life-long liberal who never voted for his dad according to Reagan’s other son, columnist and radio show host Michael Reagan. And Miss Manners would surely not approve of R.R Jr. converting the eulogy for his father into a political speech with a thinly-veiled swipe at President Bush for “wearing his faith on his sleeve to gain political advantage.”
In a recent column that I’m happy to say quoted my stem cell work, Michael Reagan declared he was “tired of the media’s insistence on reporting that the Reagan ‘family’ is in favor of stem cell research, when the truth is that two members of the family have been long time foes of it . . . my dad, Ronald Reagan during his lifetime, and me.”

As to RR Jr.’s convention speech, it was so opposite the truth as to resemble a photographic negative.

Far from blocking federal ES cell research funding, Bush specifically authorized it so long as it used existing lines of embryonic cells. But more remarkably, RR Jr. made absolutely no reference to an alternative to ES cells that is decades more advanced and carries absolutely no moral baggage. “Adult stem cells” can be extracted from various places in the human body as well as blood in umbilical cords and placentas. They were first used to treat human illness in 1957.

By the 1980s, AS cells were literally curing a variety of cancers and other diseases; ES cells have never been tested on a human. AS cells now treat about 80 different diseases; again ES cells have treated no one. AS cells obviously aren’t rejected when taken from a patient’s own body, though they may be from an unmatched donor; ES cells have surface proteins that often cause rejection. Implanted ES cells also have a nasty tendency to multiply uncontrollably, a process called “cancer.” Oops.

Regarding Alzheimer’s specifically, drugs will probably provide the cure. But forget ES cells, as Ronald McKay, a stem cell researcher at the National Institute of Neurological Disorders and Stroke, recently told the Washington Post. He labeled claims of an ES cure for Alzheimer’s “a fairy tale.”

The only potential advantage ES cells ever had was the belief that only they could be coaxed into becoming all the different cells of the body. We don’t even know if that’s true. Conversely, three different labs have now discovered it may be true of certain AS cells.

Further, perhaps we also have no need for “one size fits all.” In recent years researchers have found that they can tease various AS cells into far more types of mature tissue than was previously thought possible. Moreover, they seem to find AS cells essentially wherever they look – including blood, bone marrow, skin, brains, spinal cords, dental pulp, muscles, blood vessels, corneas, retinas, livers, pancreases, fat, hair follicles, placentas, umbilical cords and amniotic fluid. We may need all sizes, but we don’t need them from one type of stem cell.
So why do we keep hearing so much about “miraculous” ES cells? Because private investors know otherwise, pumping money into AS research and leaving ES cell labs and companies desperate to feed from the public trough.
RR Jr. began his talk saying it “should not – must not – have anything to do with partisanship,” thereby signaling its sole purpose. The Democratic position on stem cells is a cynical and cruel attempt to disenchant Republicans ignorant about AS cells and make them feel Bush is pig-headedly stopping a technology that will cure everything from Alzheimer’s to AIDS. In what’s already a nasty campaign, Ronald Reagan Jr.’s stem cell speech may have been the most vicious attack yet.