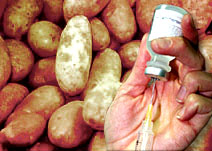 Each year, about 350 million people worldwide are chronically infected with hepatitis B (HBV). Spread through blood and other bodily fluids, this virus puts them at high risk from cirrhosis, chronic liver disease, and liver cancer – diseases that kill about one million people each year. Yet through the magic of biotechnology, the lowly spud may change that.

For centuries, potatoes have been lifesavers by providing calories, vitamins, and minerals. Now they’re tackling diseases spread by viruses and bacteria as well. Using potatoes with a protein gene (called antigens) from HBV spliced into them, researchers have produced high levels of immunity-providing antibodies in volunteers who ate them. Their findings reported in the Proceedings of the National Academy of Sciences Online, should lead to vaccines that are cheaper, safer, and easier to deliver. 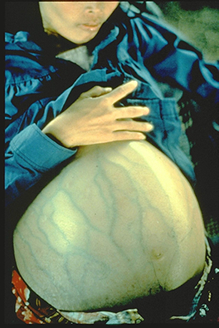 A rather horrific case of hepatitis B

In the study, scientists from Roswell Park Cancer Institute in Buffalo, New York led by Dr.Yasmin Thanavala fed volunteers small pieces of raw potato. Some had "placebo potatoes," as it were; others received two doses of genetically-engineered (GE) potatoes and one dose of placebos, while the third group ate only GE potatoes.

Nobody eating ordinary spuds developed extra hepatitis antibodies, while 53% of those who ate two doses of the GE ones did as did more than 60% of the three-dose eaters. All recipients had previously gotten the HBV vaccine series, so the potatoes simply boosted immunity they already had. Some people developed antigen levels 50 times higher after eating the super spuds.

That 60 percent level is still a far cry from the 90-95 percent protection rate provided by the 3-dose series of HBV injections, but Thanavala is already working to improve the potatoes immunogenicity to that same level and in a single dose. One method comprises inserting more of the viral antigen into the potato. Another would insert a harmless bacterium into the potato as an adjuvant, an immune system stimulator that helps produce more antibodies. Adjuvants are common in today’s vaccines.

Current HBV vaccines aren’t particularly expensive to produce; the real costs come from the need for refrigeration, injection by a trained person, and using a fresh needle and syringe each time. That’s no small potatoes, considering some studies have shown the reuse of needles and syringes in clinics may play a far larger role in the spread of HIV/AIDS in Africa than is widely reported, since politically-correct health officials wish to focus only on vaginal sex.

For a long time "edible vaccine" meant just that, a vaccine consumed as a food. But worries over medicinal strains getting mixed in with normal food put the kibosh on that. So "edible vaccines" wouldn’t really be eaten, notes Thanavala. Rather they would probably be powdered and ingested in gel capsules.

The idea of an oral vaccine is hardly new, dating back to Albert Sabin’s sugar-cube polio vaccine in 1962. But the Sabin vaccine contains a weakened live virus that sometimes causes the disease. That’s impossible with Thanavala’s tubers or other potential plant-based vaccines since they only contain a piece of the virus. 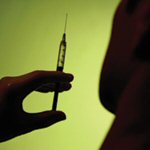 In poor countries, vaccines can cause illness as well as prevent it.

Successful potato vaccine experiments also aren’t new. Charles Arntzen of the Biodesign Institute at Arizona State University has induced antibodies in humans to both the diarrhea-causing Norwalk virus and dreaded E. coli. But these pathogens attack the stomach. Thanavala’s antigens had to make it past the stomach and into the bloodstream. That’s what makes the process so promising against so many diseases.

"I’m bowled over each time this works as well as it does," she told me. "We’ve shown the antigen in plants is encapsulated in membranes and we believe this allows it to survive stomach conditions until reaches the small intestine." As such she’s given the entire field of plant-based vaccines a boost – and a large field it is. At least 45 different antigens have been produced in a wide variety of plants to treat diseases affecting billions of people.

A short list includes an HBV vaccine being grown in lettuce, a rabies vaccine in spinach and tobacco, and an anthrax vaccine in tobacco and lettuce. Texas-based ProdiGene, which already used GE corn to produce and market an insulin component and a drug that helps prevent bleeding during surgery, but now it’s developing a corn-based HIV vaccine. You probably don’t know what hepatitis E is, but somebody is using tomatoes to make a vaccine against it.

Thanavala wouldn’t speculate when a potato-based vaccine might be available. She wants to keep it in the lab until it meets all her goals. But that recalls the axiom: "Perfection is the enemy of the good." People are dying now and this vaccine could get regulatory approval in just a few years. It sounds like a cause for the Bill and Melinda Gates Foundation. Are you listening, guys?