These amber waves of grain are safer because they’re biotech.

It’s the tenth anniversary of the commercialization of biotech crops. More are planted, grown, and eaten each year. Yet somehow despite the warnings of environmentalist and organic groups we’ve managed to survive – and thrive. Indeed, evidence keeps building that gene-spliced food can be considerably healthier than so-called "health food."

Globally, according to the International Service for the Acquisition of Agri-biotech Applications, biotech acres planted have grown almost 50-fold since 1996. They now cover the equivalent of 40 percent of the U.S. land area. An increasing percentage of these crops are in places with hungry populations such as China and South Africa.

In the United States three-fourths of the cotton, almost half the corn, and 85 percent of the soybeans planted are biotech. Considering the massive variety of foods we consume containing corn and soy and cottonseed oil, almost all of us eat biotech food daily.

The case for the extraordinary healthiness of biotech crops is strongest with corn that has an insecticide gene from bacillus thuringiensis built into it to kill munching moth larvae.

In the U.S., Bt allows farmers to spray less often. A 2004 National Center for Food and Agricultural Policy Study covering 36 states found it reduced insecticide use by more than 3.6 million pounds annually, along with increasing production by more than 4.7 billion pounds and improving farm income by more than $146 million.

But in poorer nations where spraying may be too expensive, only Bt can prevent caterpillar corn catastrophes. And nasty things aside from crop loss and bug obesity occur when insects crunch on corn, including allowing poisonous molds called mycotoxins to enter the grain.

One mycotoxin is called fumonisin. Although not identified until 1988, farmers have long observed that moldy corn made their livestock ill. Since then, a multitude of studies have shown how frightfully dangerous this disease is to mammals, birds, and even fish.

While scientists continue to investigate the health effects of fumonisins (and both rodent and human studies indicate it may cause human cancer), there’s powerful evidence it causes fatal birth defects.

A study published last year in the Journal of Nutrition found, "High incidences of neural tube defects in newborns occur in some regions of the world where substantial consumption of fumonisins has been documented or plausibly suggested." These include spina bifida, wherein the spine fails to close during pregnancy, and anencephaly in which a large part of the brain is missing.

It also discussed a published survey of 409 Mexican-American women in the Brownsville, Texas, area. Of these, an incredible184 had birthed babies with such defects. 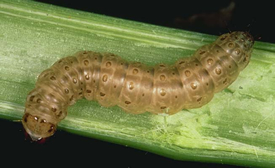 It’s ugly, it eats corn, and it leads to birth defects.

Women who ate several "home-grown" tortillas a day early in their pregnancies were 2.5 times more likely to have babies with NTF than those who ate only one daily. Those eating the most actually had a lower NTF rate, but co-author Dr. Katherine Hendricks of the Texas Department of Health suggests that could be because their fetuses were so badly damaged they were spontaneously aborted.

"There’s reasonably good epidemiological evidence correlating the corn consumption and the birth defects, and we’ve clearly seen it in rodent studies," says Bruce Chassy, associate director of the Biotechnology Center at the University of Illinois in Urbana-Champaign. "Further, we’ve found a mechanism," he told me. "Fumonisin seems to block the mother’s uptake of folic acid and we know folic acid deficiency causes NTF."

Highlighting the potential danger from organic corn, British authorities in 2003 yanked 10 brands of organic corn meal from supermarkets because they were contaminated with anywhere from four to 33 times the European Union safety limit.

What if it had been biotech corn withdrawn for any reason? Blimey! The Brits would have gone stark, staring bonkers! But it wasn’t; so the media ignored it.

In fact, biotech corn isn’t just safer than organics but even than the conventional stuff. One U.S. Agriculture Department study found fumonisin levels were 3,000 to 4,000 times higher in non-biotech varieties than in Bt corn.

Mind you, most organic food is quite safe. So is most organic corn. But the organic industry is all about spooking consumers into paying more for getting less. Don’t buy it.