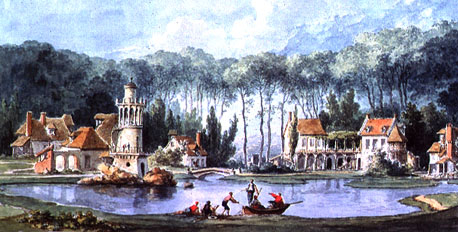 The Hameau at Versailles

On the grounds of Versailles lies Marie-Antoinette’s "Hameau" (hamlet) – at once lovely and pathetic. It comprises about 20 fairy-tale cottages and small buildings. The Austrian-born queen never felt at home in her adopted land. And so during her free time, accompanied by her ladies-in-waiting, she pretended to be a milkmaid.

The Hameau is a timber and thatch metaphor for what’s called "agrarian utopianism." Its devotees look back with longing on the time when people lived in tiny villages, and virtually everybody was somehow involved in farming. They believe that if we all just hooked a plow to a pair of oxen and eked out a living on a few acres of soil the world would somehow be a better place.

The best-known agrarian utopian today is another monarch, Prince Charles of Britain. While Marie-Antoinette played a milkmaid, Charles plays farmer. He has his own plot of organically grown fruits and vegetables that he pays others to oversee. Like Marie Antoinette, he can go there whenever he likes, do what he likes, and then slip off his designer boots to become again a pampered prince.

To him, farming is simply a fun game. Sadly, this is how he perceives all agriculture. Like all agrarian utopians, Charles views the past through thick lenses of nostalgia, sentimentality and romanticism. He doesn’t fear his family will starve if insects or worms destroy his crops. He has no idea of the back-breaking work farming was less than a century ago, of the life philosopher Thomas Hobbes described as "solitary, poor, nasty, brutish, and short."

Yet this cult of nature-worship and agrarian sentimentalism is a powerful force in the opposition to agricultural biotech and synthetic pesticides. It’s revealed in every biotech attack by the Prince of Wales, who not incidentally has also just endorsed coffee enemas as a cancer cure. After all, coffee is natural – though arguably having it pumped up your rectum five times daily is not.

Margaret Mellon of the staunchly anti-biotech Union of Concerned Scientists now pretends her arguments are based on science rather than sentimentalism. But previously she asserted, "I resist the notion of improving nature in the future, just as I lament the loss of nature as it was in the past."

Yet agrarian utopians venerate nature in a way it has never deserved. Nature offers rain and sunlight to nourish crops and wind to blow the pollen. But it often gives that rain as floods, or withholds it and causes drought. It "provides" brutal winters that kill livestock and windstorms that whisk topsoil away forever. It brings hideous diseases of crops, animals and people.

In his oft-cited little book Farmageddon: Food and the Culture of Biotechnology), former farmer Brewster Kneen admits, "I am against all biotechnology," including even lifesaving pharmaceuticals. "Not on principle," he says, "but because, as an artifact of society, an expression of a particular culture, I think ’modern biotechnology’ is a bad attitude – a bad attitude towards life, towards Creation, towards other cultures and other ways of knowing and experiencing the world."

Psychobabble? Sure. But at least Kneen admits what so many of his fellow critics will not – that he truly opposes progress for its own sake.

The ultimate manifestation of agrarian utopianism is organic farming. It’s hard to think of being sentimental about manure, but that’s the only "advantage" it has over chemical fertilizers. Organic insecticides (yes, they use them) are old-fashioned. Rather than poison weeds with herbicides, they dig them up, thereby loosening and ultimately losing the topsoil.

Now, just what does organic food provide? More nutrition? No. More attractive food to steer kids from processed junk to fresh produce? "Not likely!" chuckles Mr. Worm from the comfort of your organic apple. Is it safer? No. In some cases such as bean sprouts, which are often contaminated by nasty E. coli bacteria from manure, it’s clearly hazardous. Does organic food save consumers money? That’s an unfunny joke. By raising the price of fresh produce, it hurts those already eating the least – the poor.

Yet there are those princes who insist that the paupers pay more to get less. Others who would say of those who can’t afford organic bread that which poor Marie-Antoinette never did: "Let them eat cake!"