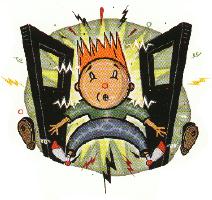 It’s pretty hard to live down a health scare, especially when you have to contend with a nasty competitor and a pack of gullible journalists.

What’s wrong with this picture? Sensormatic Electronics Corp. dominates the market for antitheft systems in retail stores. Rebounding from a slump that began a few years ago, the Boca Raton, Fla.-based company should report 40 cents a share in earnings in the current fiscal year and 70 cents in the next. But the stock languishes at $8.63, well below book value.

Checkpoint itself funded one study condemning the Sensormatic system; then it placed press releases and full-page ads touting its own systems as "free from pacemaker interference." Checkpoint, based in Thorofare, N.J., is less than half the size of Sensormatic, so the counterpunching would be fair game if the pacemaker threat were real. But it isn’t. The U.S. Food & Drug Administration reviewed the matter last fall and deemed the threat insignificant. The American Heart Association has weighed in similarly.

Says Sensormatic President Robert Vanourek: "Look, Coke battles Pepsi, Ford battles GM. But there’s a sense of playing by the rules. When you engage in company assassination by innuendo, you’ve gone beyond the pale." Checkpoint says it’s only trying to avoid getting hurt by the scare which it has helped perpetuate.

Sensormatic’s image problems began in May 1995 with a report by Dan Dorfman, then an on-air rumormonger for CNBC. His key source: a public relations guy who had worked for Sensormatic, lost the account and quickly took on Checkpoint as a client. Within days Sensormatic’s stock had lost one-fifth of its value as short-sellers pounced. Cut to two years later: Checkpoint gives a $100,000 grant to Michael McIvor, a cardiologist at the Heart Institute of St. Petersburg, Fla., to study the pacemaker problem.

Both Checkpoint and Sensormatic sell similar systems that emit magnetic radio waves to detect tags that haven’t been removed or desensitized at a checkout counter. Checkpoint’s systems simply operate at a higher frequency. The findings were golden for Checkpoint: McIvor said the Sensormatic system interacted with 48 of 50 pacemakers; Checkpoint systems caused no interactions. The results ran 18 months later in the October 1998 medical journal PACE, just as the November issue of the New England Journal of Medicine ran a short article about one case and a letter, co-authored by McIvor, about a second.

The press ran wild. "Shoplifting gates can be hazardous," the Associated Press blared. CNN, USAToday, the Chicago Tribune, the New York Daily News and the Washington Post picked up the story. Reuters declared the systems can "make implanted pacemakers and defibrillators go haywire, with sometimes fatal results" and later issued a correction saying there was no evidence of deaths.

The fine print was far less frightful, but few noticed. Fifty people is a terribly small sample. An "interaction" usually is nothing more than a skipped heartbeat. Only three of the people who walked briskly through the antitheft gates had an interaction; the other interactees were told to stand between the gates or lean on a transmitter for up to five minutes.

Featured prominently in the coverage was McIvor, who wasn’t the most objective investigator. He sought out Checkpoint, among other antitheft system makers, to fund his study after a patient had trouble with the sensors. He put out his own press release, pushed the FDA to investigate and laid out the risks at a retailers’ seminar.

Sensormatic fought back. It forked over $25,000 to get access to McIvor’s results and still hasn’t received the data. As the company fired off press releases and letters to the editor defending itself, it only focused more attention on the whole mess and journalists are loath to retract their scare stories.

The frustrating thing for Sensormatic is that most experts firmly agree no real risk exists. A review of 43,000 pacemaker patients who get U.S. veterans’ benefits found a "total absence of any complaints." A study of 150,000 patient histories in London found much the same. The FDA has logged about 20 reports. Worst reaction: "chest pain."

Yet with 1.1 million patients, and 60,000 stores using antitheft systems, if the risk is real, "Something should happen. There ought to be people lying on the floor at Home Depot," says J. Warren Harthorne, director of the pacemaker lab at Massachusetts General Hospital in Boston.

Serious problems "are extremely unlikely to happen," adds Douglas P. Zipes, vice president-elect of the American College of Cardiology and a professor at Indiana University. He has just submitted a new study for publication: One hundred seventy patients with implanted defibrillators walked through Sensormatic systems, and "zero interactions" were found. "This whole thing is just a tempest in a teapot," he says.

And just who funded Zipes? Sensormatic, fighting fire with fire.