Just off the top of our heads, most of us can think of about 30 terms to describe those who sent airliners crashing into the World Trade Center and the Pentagon. Just don’t call them cowards. Or so agreed the guests on the Sept. 17 airing of the ABC talk show Politically Incorrect — and many other writers and pundits since.

And no, none have been named Osama bin Laden. These are people who were presumably horrified by the attacks. 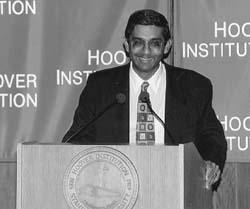 Dinesh D’Souza: "These are warriors."

But they are wrong.

The controversy began when a Maher guest, conservative American Enterprise Institute scholar Dinesh D’Souza, declared: "One of the themes that we hear constantly is that the people who did this are cowards," began Mr. D’Souza. "Not true," responded Mr. Maher. "We’re the cowards. Right."

Explained Mr. D’Souza, "You have a whole bunch of guys who were willing to give their life (sic). None of them backed out. All of them slammed themselves into pieces of concrete." He added, "These are warriors."

Yes, said Mr. Maher. "We have been the cowards. Lobbing cruise missiles from 2,000 miles away, that’s cowardly." Another guest, country-club-conservative-turned-limousine-liberal Arianna Huffington agreed, and Mr. Maher added that "Staying in the airplane when it hits the building . . . say what you want about it, not cowardly."

Mr. D’Souza is laying low these days, while Mrs. Huffington has turned herself into a PR machine to save a show — and her seat on that show — that doesn’t appear to be threatened by cancellation. But Mr. Maher caught grief.

Sears and Federal Express pulled their sponsorships. Several affiliates temporarily dropped Politically Incorrect, though most are now airing it again.

Finally, Mr. Maher has repeatedly apologized and attempted to explain himself. But he hasn’t done a good job.

Trying to kill the world’s deadliest terrorist leader by lobbing a few cruise missiles his way was truly stupid. It was a decision based not on the likelihood of taking out Mr. bin Laden, but on the certainty of no U.S. military casualties. (Critics also sarcastically dubbed them "Monica Missiles," a reference to how they went flying at the height of the Monica Lewinsky scandal.)

Pres. Clinton thought we had no stomach for military casualties, no matter how just the cause. And he wasn’t about to risk a few points in his ratings to find out otherwise.

It will always be one of the grotesque ironies of our time that efforts to keep the military safe and sound led to the deaths of over 6,000 American civilians.

As to the terrorists, we don’t know that none of them had second thoughts once on board the planes. In small special operations, other members of the unit ensure that nobody can back out. And leaving at the last minute would have been rather difficult.

Describing the terrorists as "warriors," is downright offensive. Unlike Maher or his guests, I was a warrior. I’m a vet. And I know warriors fight other warriors, not innocent civilians.

I, too, was completely willing to give my life for my country if need be. I was part of the airborne rapid deployment force that was supposed to slow a steel wall of invading Soviet tanks with nothing but light weaponry until heavier forces could get in place.

Since this was also the time of the post-Vietnam "hollow Army," our equipment was decrepit and our platoons looked more like squads. Few of us suffered the illusion that after facing the Soviet army we would come back wearing anything but a body bag.

Finally, what about this "non-cowardly" stuff? 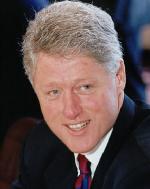 Clinton’s actions: Not cowardly, but calculated

One dictionary definition of cowardice includes "the practice of committing acts of violence against people who are weak or defenseless." That seems to fit.

In the Army, we were trained to kill other men who carried guns. We did not train to kill unarmed civilian men, women, and children en masse.

In Special Forces school I was taught how to slit a throat by slashing that of a goat with a Ghurka knife. Even this I found distasteful; goats can’t slash back. I would not think myself a "warrior" for slashing the throat of an airline attendant.

Nor can the terrorists be compared to the Japanese Kamikaze pilots of World War II, who sent their planes into warships in hopes of delaying an invasion of the home islands. Rather, the hijackers came from camps where it’s taught that martyrdom brings glory and pleasure. Their families are compensated and their pictures are posted prominently in mosques and schools. Jihad martyrs are promised that upon the instant of death they shall find themselves lying on cushions and beautiful carpets, drinking wine and delighting themselves with 72 virgins, "beautiful like rubies, with complexions like diamonds and pearls." They will also be allowed to bring with them to paradise 70 members of their family, to boot.

For a split-second of pain, it’s not a bad deal all in all.

Contrast that with common Christian teachings that suicide is a non-stop ticket to hell, and it deflates a bit of the terrorist machismo image.

On the other hand, Hitler stayed in his bunker and shot himself, instead of fleeing the country like some of his top henchmen. Have you heard him lately described as even "mildly gutsy?" D’Souza, Maher, and Huffington have a right to their opinions. That’s part of what America’s about, and part of the reason the terrorists hate us.

Further, if you can’t say things that infuriate people on a show called Politically Incorrect, where can you?

But turning a fuel-laden jet into a guided missile and smashing it into a center containing perhaps 50,000 defenseless adults and children is not just evil. It’s the most cowardly, non-warrior thing imaginable.