Every day it seems somebody dreams up a new tort. You probably heard that lawyers have filed suit against three companies seeking reparations for having used slaves prior to 1865. Never mind that there aren’t many slaves still around to collect a judgment. Now 17 U.S. servicemen held captive during the Gulf War are suing Saddam Hussein and his government for "unspeakable and prolonged physical pain [and] intense and prolonged mental anguish and harm," according to their attorneys. 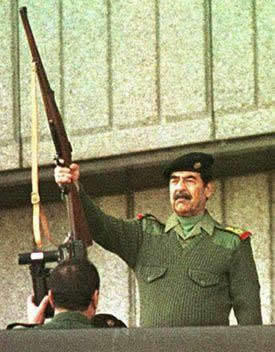 They’re each seeking at least $25 million from frozen Iraqi assets, along with at least $5 million more for anguish suffered by each of their close relatives. They want a total of $300 million in punitive damages as well.

Don’t get me wrong; obviously these men deserve not only our sympathy but also our greatest thanks. Thank God that unlike the Vietnam vets, they didn’t have to wait decades to get it. As for Saddam, may the last image he ever sees be that of a Hellfire missile locked onto his mustache.

First, consider the precedent. If mistreated POWs can sue the nations that captured them, what’s to stop vets from going after Germany (for two wars), Japan, and Italy? Nothing. But it wouldn’t do much for our relations with these important allies.

Isn’t it also rather unseemly for the greatest military power the world has ever known to be duking it out with the world’s most dangerous dictator in a court of law, with poignant nightly commentary provided by Greta van Susteren and the guests on the Larry King Show?

Such a suit can also give the impression that our military and our willingness to use it is going soft. It was Osama bin Laden’s reliance on this perceived weakness that led him to believe he could attack us repeatedly and viciously and still keep his hide safe in Afghanistan.

But when "you sign up for war, you don’t sign up to be treated the ways these individuals were treated," said one of plaintiffs’ lawyers, who works for the D.C.-based law firm of Steptoe & Johnson. "It just wasn’t in the sphere of risk that anybody would think they were undertaking in wearing the uniform."

Hello? Earth to trial lawyers! Sorry, but wars are not widely considered to be a form of picnic. Rumor has it that sometimes the folks on the other side even—gasp!—shoot at you. Why? (I swear I’m not making this up.) Apparently they’re trying to kill you.

(Which makes one wonder if the next step isn’t to file suits against Saddam on behalf of all Gulf vets injured or severely emotionally distressed.)

Mistreatment, torture, and even murder of prisoners are unfortunately part and parcel to war. Ever hear of the Bataan Death March? Ever hear that the Japanese used prisoners to test horrible biological warfare agents? Did you know that the so-called "Hanoi Hilton" was not actually a hotel, but rather a combination POW/torture camp?

Our brave men fighting right now in Afghanistan know the enemy doesn’t even take prisoners—which is probably for the better considering what they would probably do to prisoners if they did decide to keep them. One of our soldiers has already been summarily executed upon being seized, but you didn’t see his comrades scurrying back to the base camp demanding to be sent home.

This all smacks of the victims groups crying over Agent Orange and "Gulf War Syndrome," who labor under the belief that if they served their country in a battle zone they not only deserve the GI Bill but also have the inalienable right to never get sick, never have a baby with a birth defect, and never die. Funny, but I didn’t see that in my enlistment papers.

What General Sherman said long ago is still true. War is hell. But conscription in this country ended long ago, so at all of our servicemen are volunteers. If you don’t want to risk injury, death, capture, or torture at the hands of an enemy, don’t raise your right hand. If you do raise that hand, let there be no mistake as to why and to what might happen. They don’t call it "harm’s way" for nothing.