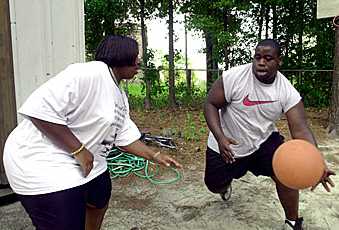 Just days ago, I sat at an outdoor cafe in Budapest watching the thin people. Scores would walk by before I would see so much as a small potbelly. Now I’m back in the Land of the Fat, Home of the Broad. America is already the fattest nation on earth, yet we grow wider by the year. What has gotten into us?

There’s no one explanation for the obesity epidemic, but much of it can be laid at the feet of the low-fat myth spread by the food industry, diet-book authors and—most perniciously—our own trusted government health officials.

Back in 1990, a government report by the Food & Drug Administration (along with a coalition of 38 federal agencies and health organizations) instructed consumers to reduce the fat in their diets to 30 percent or less of total calories.

The report was actually aimed at lowering cholesterol levels and preventing heart disease, though, even here, it was grossly over-simplistic. After all, some types of fats are far worse for the heart than others, and fish oil actually appears beneficial.

But the real problem came when health agencies and others seized upon it as a way of reining in the nation’s growing obesity problem. Get down to the 30 percent threshold and you will achieve nirvana and thinness, we were told.

And retold and retold. It’s even proclaimed by every single FDA-mandated food label, where it indicates what percentage of our "daily value" the fat in the product provides. Yet the science has always said that maintaining a healthful body weight is no more complex or magical than simply balancing calories burned versus calories consumed, regardless of the source.

A slew of studies have looked precisely at this issue, providing subjects limited-calorie diets with varying amounts of fat, protein and carbohydrates. Most have found that persons eating a high-fat diet lost as much body fat as, or more than, those on a low-fat one.

One such, at New York’s Rockefeller University, reported back in 1992, fed all subjects liquid formulas with the percentage of fat ranging from zero all the way up to 70 percent of total calories. The result? "A calorie is a calorie," said the primary researcher.

Following the government’s lead, foodmakers began selling low-fat, high-sugar snacks and desserts as if they were health food.

Dietary data from countries around the world also show no correlation between fat consumption and obesity levels—except that Americans get far fewer of their calories from fat than do countries where people look like stick figures compared to us. Hungarian cuisine, incidentally, is notoriously fatty.

Finally, historical U.S. consumption data show that we now get a considerably smaller percentage of our calories from fat than we did not so long ago—when we were as thin as those Hungarians.

Since 1977-78, fat as a percentage of our diets has dropped by over 17 percent, even as obesity has increased by over 25 percent. The fewer calories we’ve taken in from fat, the fatter we’ve become.

"The studies are clear," Walter Willett, chairman of the department of nutrition at the Harvard School of Public Health, told me. "As far as body fat goes, it doesn’t make any difference where your calories come from."

Suddenly, this is all being treated as new. Yet it was all discussed in my 1997 book, [The Fat of the Land](./bestsellingauthormichaelfumentoreportslandofthefat).

Nor should it be a surprise that this has wreaked havoc on our eating habits.

A joint Food Marketing Institute and Prevention magazine survey in 1996 found that 72 percent of those polled made decisions to buy food based on the fat content listed on the FDA’s label, while only 9 percent treated calories the same way.

Spurred by the government’s Demon Fat campaign, foodmakers began pumping out products low in fat but packed with sugar and calories. Yet controlled studies support the common-sense assumption that when told what they’re eating is low in fat, people become pigs. They swap small amounts of satisfying fat for mountains of calories that leave them feeling empty.

None of this is to say the government should have no role in public health, including lifestyle issues. But early successes against contagious illnesses and smoking have lately been replaced by questionable crusades against asbestos, passive smoking and animal carcinogens. The government’s AIDS campaign, which from the beginning targeted those least at risk and largely ignored those truly at risk, has tragic parallels to the Demon Fat campaign.

If our health officials truly want to help us, they must stick to the science. And they must never forget Hippocrates’ admonition: "First, do no harm."