Uh-oh, it’s time to be afraid again. Be very afraid. No, it isn’t pesticides this time, nor household radon, silicone implants, cellular phones, or any of the previous bogeymen. Now the target is phthalates, a chemical that makes plastics soft for toys and teething rings.

Lots of damage will be done before this blows over but maybe, just maybe, this time we’ll learn a lesson. That assault was bolstered by the air of an ABC 20/20 segment that asked: "Are Babies at Risk for a Chemical Found in Toys? " and answered with a resounding Yes!

ABC reporter Brian Ross told trusting and trembling viewers, studies at high doses in laboratory animals have shown that phthalates are toxic to the liver and kidney and cause cancer. Now here (with apologies to Paul Harvey) is the rest of the story.

ABC’s self-described major 20/20 investigation of phthalates was a collusive effort with Greenpeace. By the greatest of coincidences, it appeared on the same day the environmental group released its report on the dangers of phthalates. Report is in quotes, though, because it was actually an opinion piece with a few notes attached. The body of it is shorter than what you’re reading here.

Greenpeace’s blitzkrieg also prompted articles in the Wall Street Journal, the New York Times, and elsewhere, though both these papers seemed rather skeptical. Not so ABC.

20/20 told us that four European countries have already banned phthalates in children’s toys and others are considering various restrictions. The idea is that the United States is behind the curve. Funny how no environmentalist or safety watchdogs said we were behind Europeans during our frenzies over Alar, household radon, or silicone breast implants, scares that left Europeans scratching their heads at our folly.

The best-known of these, a chew-and-spit study from the Netherlands’ National Institute of Public Health and the Environment, showed that taking into account children’s biting and sucking times, 95 percent of the children would receive less than a half of the Tolerable Daily Intake (TDI) set by the European Union for the phthalate Greenpeace is attacking, while 99 percent would be under the limit.

It granted the theoretical possibility of some child somewhere exceeding this, but said it’s so rare that statistical likelihood cannot be estimated and even this excess might be meaningless. Further, for children less than a year old the risk is considerably lower, it said, as if it were possible to be considerably lower.

To you, this is a baby.
To Greenpeace, it’s a weapon.

ABC did quote an industry spokesman saying a child would have to be eating toys and teething rings rather than sucking on them to even approach the theoretical danger limit. It could have quoted an independent scientist saying the same, but that’s not how you play the game. Instead you pit a consumer advocate against someone with money at stake, allowing the viewer to draw the obvious cynical conclusion.

In any case, if your child eats toys, phthalates are the least of your worries.

But actually there is no danger limit. You see, ABC and Greenpeace also didn’t tell us phthalates have caused tumors only in rodents. Other studies showed the chemical caused no harmful biological activity in guinea pigs (which aren’t rodents) and most importantly for human purposes in two species of monkey.

Why? Because rats and mice have huge numbers of a specific cell receptor that phthalates can irritate (through a mechanism called peroxisome proliferation) into causing tumors. Guinea pigs, monkeys, and — yes — humans have about a tenth the number of such receptors. Further, each receptor we do have is apparently less sensitive than rodent ones.

Ethical considerations prevent massive dose testing of live humans, but lab tests of human cells have shown no reaction, while the rodent cells exposed to phthalates went wild. Hence phthalates slide out of us and our various non-rodent animal friends without passing go, collecting $200 - or causing damage.

In preferring rodent studies over those of primates, ABC and Greenpeace appear to be taking the expression "rugrats" just a wee bit far.

But again, that’s part of the game. Tell people it’s strictly a problem for nasty rodents and not for kids and your argument (and ratings) vanish like the pretty ladies in magician David Copperfield’s act.

Finally, ABC could have told viewers this is just Greenpeace’s latest ploy in its campaign to ultimately ban any and all synthetic chemicals — and a desperate attempt to restore its solvency. Since 1991, the group has lost almost two-thirds of its members and more than half its budget. In 1997, it was forced to close all of its field offices and lay off all but 65 of 390 staffers.

To rebuild itself, the Christian Science Monitor noted in July, the organization is struggling to regain its radical spark.

Toy companies have been responding to this radical spark by promising to remove phthalates from their toys or simply yanking toys from the market. This though each insists it’s only a PR move, that their products have always been safe.

So parents, kids and sound science all lose and Greenpeace wins — with a bit of help from its friends at ABC. 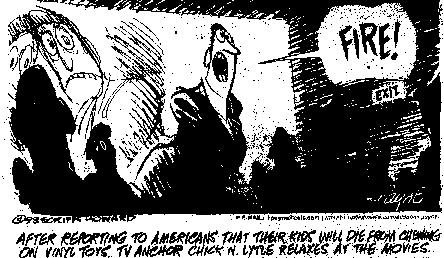