On the same day the U.K. announced that it had enacted a Bill of Rights for Britons, the USDA announced one for Americans. American laboratory birds and rodents, that is.

In a move quickly denounced by both the National Association for Biomedical Research (NABR) and the Association of American Medical Colleges (AAMC), the Agriculture Department agreed to a legal settlement expanding its regulation of research animals under the Animal Welfare Act (AWA) to birds and, far more importantly, rats and mice. Since rodents comprise about 95 percent of all test animals, the expansion will be dramatic. And horrendous, according to AAMC President Dr. Jordon Cohen.

"I think it’s pretty transparent the initiative is to limit, if not eliminate, use of animals in research and that’s clearly not in public’s interest," he said angrily. Nor will it be in the interest of the animals, he says. "Birds and rodents are already covered by other regulations."

Of the many researchers with whom I spoke, all agreed that extending the regulations would be both expensive and unnecessary.

Surprisingly perhaps, that was also the USDA’s position only last year. "We believe that extending AWA coverage to laboratory rats, laboratory mice, and birds would have a substantial financial impact on the affected entities and that the vast majority of rats, mice, and birds being used in biomedical research are already being afforded certain protections," declared the agency. Among the protectors is the National Institutes of Health. "We actively enforce [Public Health Service] policy for all vertebrate species," it recently stated.

But now the USDA calls extending the AWA to rodents "prudent and responsible" and with a federal judge having refused to disrupt the settlement, only Congress can intervene.

The USDA is doing backflips on the animal testing issue.

Senator Thad Cochran (R-Miss.), an influential member of the Senate Appropriations Committee, has added language to a bill outlining USDA’s 2001 that would effectively block the agency’s recent settlement with an animal-rights group.

The burden, the researchers explained, won’t be in treating the animals well, since they already do that. It will be paperwork.

"We looked at the regulations set out for primates and it means you have to document everything that goes on with that animal during the day," Professor Valina Dawson told me. Professor Dawson researches stroke and Parkinson’s disease with her husband Ted Dawson at the Johns Hopkins School of Medicine. "We have somewhere around 1500 mice in our project, so if we had to have that kind of documentation we estimate that we would need a secretary for about every 100 animals.

"Now consider that one NIH grant supports at best four people, all researchers. You do the math and with these regulations our entire staff would be secretaries cataloguing our animals."

Johns Hopkins has taken the lead in opposing the rights for rats regulation because it has almost 500 scientists using about 45,000 rodents and 300 birds in research. It also gets more federal grant money for animal research than any other institution, and is building a $30 million "Mouse House" to accommodate some 140,000 transgenic mice and rats.

"One of advantages of rodents is the opportunity to work with large numbers, which gives you statistical reliability," says Dr. Richard Markham, an AIDS researcher at Johns Hopkins says.

"In the medical journals you almost never see statistical tests with primate research because the costs are prohibitive in obtaining and housing the animals," he says.

But extending the USDA regulations would turn the very advantage of using large numbers of animals into a tremendous disadvantage. "If you were doing documentation for just, say, 60 to100 mice instead of 2 to 4 primates the burden would essentially bring the research to a halt," says Markham.

Dr. Markham has spent the last decade working on strategies to prevent transmission of HIV into mice that have been genetically altered to have human-like immune systems. He says his research will be most applicable in developing countries, where women "have less negotiating power" in terms of either telling a man "no" to sex or making him use a prophylactic.

He also says it would be impossible to do his work without animals, since it often directly involves the vagina and you don’t find a lot of those in petri dishes and test tubes. Getting human volunteers might be rather difficult as well. 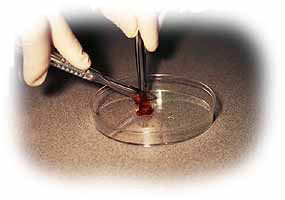 Kind of hard to get a vagina into one of these.

Researchers certainly can misuse or abuse animals, but Professor Dawson notes the research would suffer more than the animals. "If they’re not healthy and happy, your experiment is not going to work," she says.

Estelle Fishbein, general counsel for Hopkins, told me that they, as did NABR, filed a motion to intervene but that the court never had a chance to consider the motions because the USDA decided to settle. "The scientific research community was completely locked out of this case," she said. "In 40 years of practice, I’ve never seen anything like this." Other research institutions, such as Iowa State University, have publicly voiced the same complaint.

Naturally, the plaintiffs are animal rights activists. But it turns out they have one agenda while the lawyers have an entirely different one.

The lead plaintiff was the Alternatives Research and Development Foundation (ARDF), an affiliate of the American Anti-Vivisection Society, which flatly opposes all use of animals in "research, testing, and education," humane or otherwise.

Indeed, ARDF’s press release announcing its campaign to expand AWA coverage was entitled, "Group Petitions USDA to Save 20 Million Animals Yearly in U.S.," explaining that this is the estimated number of rodents used in lab research each year. "Save" obviously doesn’t mean "use humanely."

"This restriction won’t affect the care of animals in any way," says Professor Dawson, "it’s just a mechanism to slow or prevent animal research." She adds, "This is just amazing to me. I think these people should be forced to look to go to ALS (Lou Gehrig’s disease) and cancer wards and look these people in the eye."

As for the plaintiffs’ attorneys, Andrew Kimbrell and Joseph Mendelson III, they are with a Washington, D.C. outfit called the International Center for Technology Assessment (ICTA). According to its web site, this is the only animal welfare suit it’s ever filed. Its other suits include demanding that the EPA ban biotech crops, that the FDA more heavily regulate such crops, and that the National Park Service prevent a biotech company, Diversa Corp. of San Diego, from searching Yellowstone park for microbes that can be used for medical and industrial biotech enzymes.

Is there a pattern developing?

To be sure, ICTA isn’t just anti-biotechnology, it’s anti-technology. Period. Another of its lawsuits had Greenpeace as a plaintiff and sought to force the EPA to declare "greenhouse" gases from cars as pollutants. Mr. Kimbrell formerly served as deputy to Jeremy Rifkin, widely described as America’s premier Luddite, but perhaps like Avis’s claim, he tries harder. Kimbrell wrote an essay for The Ecologist railing, "It is ever more urgent that we become heretics to the religion of science and that we reinvent and devolve our technology."

But biotechnology is clearly Mr. Kimbrell’s ultimate technological bugbear. Back in 1993, in a press conference tied to the release of the film Jurassic Park, he declared: "Now is the time to limit genetic engineering to the treatment of serious disease. Congress must act quickly to ensure that life forms are not engineered, cloned and patented."

"I kinda like the idea of being in the forefront of medical technology!"

Mr. Kimbrell is also president of the board of directors of The Turning Point Project, which takes out full-page ads in The New York Times on subjects such as "technomania," "industrial agriculture," and, yes, "genetic engineering." Advertisements in this last category had such titles as "Who Plays God in the 21st Century?," "Genetic Roulette," "Where Will the next Plague Come From?" (Biotech, natch.)

But is discouraging animal research truly an effective weapon against biotechnology?

You bet, says Dr. Cohen. "There’s no question if this initiative succeeds it will put a monkey wrench in medical biotechnology’s gears." According to the Pharmaceutical Research and Manufacturers Association in Washington, D.C., there are about 370 different biotech drugs and therapies in human trials this year. Included are drugs for all types of cancer, AIDS, Alzheimer’s and practically any disease you can name. And almost every last one of these trials was proceeded with animal testing.

Then again, notes Dr. Cohen, the same is true of non-biotech drugs. ICTA’s effort to thwart biotechnology could strangle pharmaceutical progress across the board.

"It would be different if this were serving a credible purpose but it makes no sense whatsoever," says Dr. Cohen.

Sure it does, doc. It just depends on your perspective.