Any American who has ever visited Europe can tell you how much thinner Europeans are than we. Any European who has recently arrived here will gladly regale you with stories about how stunningly fat he thinks we are.

No European country even comes close to us in terms of obesity. The average North American is more than 16 pounds heavier than the average Northern European. But gross obesity is where we really excel. We have almost three times as many grossly obese people as Sweden; four times as many as the Netherlands.

Yet by our standards they are doing everything wrong.

Low-fat and no-fat cookies, cakes and desserts are virtually nonexistent in Europe. You’re more likely to find a statue of the Duke of Wellington in France than a Snackwell’s cookie.

Europeans get almost no wonderful diet advice thrown at them, like we do — by the government and those wonderful women’s magazines that regularly offer "the last diet you’ll ever need." Only the U.K. provides food labels with fat and calorie content. Without our "solutions," Europeans are so much thinner than we. Why?

Our food portions look like something out of Jurassic Park.

Europeans have more appreciation for the quality of food, while to Americans, quantity has a quality all its own. Muffins are now five times or more their original size. Pastry shops sell doughnuts the size of plates, perhaps 10 times larger than the originals.

The original bottle of Coca-Cola held 6 ounces; now the standard bottle from a machine is 20 ounces and convenience stores sell 64-ounce sodas (containing more than 800 calories). Yet the typical European Coca-Cola bottle is about 8 ounces.

Europeans haven’t been indoctrinated with the low-fat/no-fat nonsense. "The studies are clear," says Dr. Walter Willlett, chairman of the nutrition department at the Harvard School of Public Health. "It’s a myth that it’s just the fat in your diet that makes you fat. ... It doesn’t make any difference where your calories come from."

We don’t get nearly as much informal exercise.

If you see a jogger in Paris or Brussels, it’s probably an American. Europeans are walkers; we are drivers and passengers. They have a great advantage in that things are much closer together in their cities. But Americans can easily work more informal exercise into their schedules, such as parking the car as far from the store entrance as possible and taking the stairs whenever possible instead of the elevator.

The American diet seems to treat fiber (the indigestible part of fruits and vegetables) with more loathing than cockroaches. Europeans eat much more high-fiber (whole grain) bread, cereal, fruits and vegetables than we do. A recent survey found that most Americans who ate any whole-grain food at all ate less than a serving a day. More than half consumed no whole-grain cereals during the previous two weeks. A 1996 survey of shoppers found that for 80 percent, the first item they looked for on a label was fat content. Only 3 percent said fiber.

Yet, there is overwhelming evidence linking high fiber intake with slimness. For example, one study comparing the self-reported diets of lean and obese women found that the lean women’s diet contained 45 percent more fiber than that of their obese counterparts. Another found that women given a small citrus and grain fiber supplement for three months lost about four and a half pounds more weight than the comparison women who didn’t take the supplement. Over a year, that would be an 18-pound loss without cutting a single calorie or spending so much as five minutes on a treadmill.

We hide behind excuses.

Americans have built up an aura of inevitability, victimization and rationalization around obesity. Lat year’s big excuse was, "I have the fat gene." Strange how the gene seems to manifest itself only on this side of the Atlantic.

This year’s big excuse is, "I’m fat but I’m fit, and that’s all that counts." Wrong. You may have good cholesterol, glucose and blood pressure levels, but all that fat takes an inevitable toll. Studies dating back literally a hundred years show clearly that the fatter you are, the shorter your life expectancy.

We are also largely institutionalizing obesity, with clothes catering to obese women on practically every street corner, popular magazines like People proclaiming on the cover, "Who Says Size Counts?" and the politically correct toiletry chain, The Body Shop, using an obese Barbie-type doll as a mascot. (Interestingly, The Body Shop stores in Europe do not use the doll.) The Mattel company has finally caved into demands and made Barbie herself fatter.

We’re tied to the Tube.

Americans watch more than four hours of television a day on an average, more than twice the average European. This fattens us up by keeping us from doing calorie-burning activity and by bombarding us with tempting food commercials. This is especially true with younger Americans. Researchers reported in the Journal of the American Dietetic Association that "television viewing was the best single correlate" to children’s fatness.

We’re in too much of a hurry. 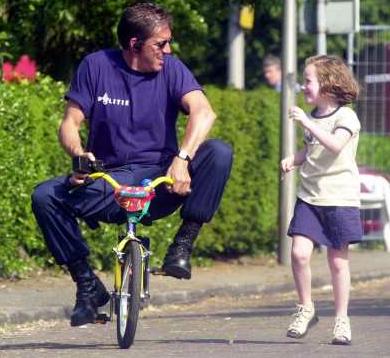 In the Netherlands, bicycling remains a common form of transportation for young and old — though usually adults usually have bigger bikes than this.

Europeans generally take life easier, with longer vacations and (more importantly here) longer meals. Americans seem to have a need to get our food fast and wolf it down even faster, turning what should be a sensual experience into a drag race.

When it comes to trying to get rid of excess flab, we can’t wait for that either. The fat we put on over a period of decades we want to remove permanently in a few weeks. The urban landscape is dotted with signs promising "Lose 30 Pounds in 30 Days!"

One of last year’s biggest-selling diet books was The 5-Day Miracle Diet. Not quick enough for you? You should also buy The 4-Day Wonder Diet. Yet the slower you lose, the easier it is to stick to your regimen and the more likely you are to keep the pounds off.

Miracles come from God, not from diet book authors, weight-loss clinics or pharmaceutical companies. With 300,000 Americans a year dying of obesity, we need to get serious about our national weight problem. To be more slim, Americans must do when they want to be chic: Imitate the Europeans.