We often hear that to live longer, most of us need to lose weight. But did you know that when it comes to automobiles, losing weight is a killer?

That’s the conclusion of a draft National Highway Traffic Safety Administration (NHTSA) study just evaluated by the National Academy of Sciences (NAS). It found that for every 100 pounds shaved off the average weight of cars, 322 more Americans will die each year in traffic accidents.

The NAS panel declined to endorse the report, but did not specifically reject the 322 death figure. That estimate is considerably higher than the 200 deaths a year cited in a 1991 NHTSA report. And it should make us re-evaluate an anachronistic law that’s turned an agency with "Safety Administration" in its name into a killer.

The law is CAFE, which stands for Corporate Average Fuel Economy standards. Congress enacted it in the mid-1970s as a means to increase the fuel economy of cars and reduce our dependence on foreign oil. It mandates that the cars sold by any manufacturer selling in the United States must average at least 27.5 miles per gallon.

Since then, we’ve fought a war which made clear that nobody can tamper with our foreign oil supplies. The post-war period has shown that the world has such a glut of oil that even with one of its major producers (Iraq) out the business, prices when adjusted for inflation are as low as they’ve ever been.

Yet CAFE remains on the books and it continues to kill. Here’s why.

There are numerous ways in which auto makers have made their vehicles more fuel efficient. Engines have been improved, tires have been stiffened so they balloon less at high speeds, car bodies have been made to cause less wind resistance.

But for all this, the easiest way to improve mileage is still to make a car lighter or to simply sell more lighter cars and fewer heavier ones.

And there’s the rub. For as car companies have sold more lighter cars, there have been more deaths as a result.

In what is still the best peer-reviewed work on the subject, Robert Crandall of the Brookings Institute and John Graham of Harvard calculated that CAFE had caused about 500 pounds to be cut from automobiles and that this 500 pound reduction was causing from 2,200 to 3,900 fatalities per year.

They found that each 100 pounds shaved off cost 440 to 780 lives — somewhat above NHTSA’s calculation but the point is the same. Lightness kills.

In defense of CAFE, NHTSA has pointed out that since it was enacted, automobile death rates have gone down considerably. 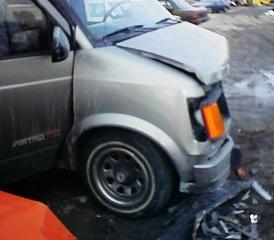 Seat belts are great and air bags can help, but big cars do better in a crash than small ones.

Sure they have, but that’s because on a per-vehicle miles traveled basis deaths have been going down since the 1920s. The point is they would have declined even further but for CAFE.

Another argument is that cars are safer than ever because of things like airbags and crumple zones that make the car collapse upon impact in such a way as to protect passengers.

This, too, is true but irrelevant. Were it not for CAFE those cars would be safer yet.

Indeed, one study shows that an airbag is the equivalent of about 485 pounds. So the airbag that you think makes you so much safer really just, on average, offsets CAFE.

NHTSA contends that while cars have gotten lighter, there’s no telling how much of this is due to CAFE and how much to market forces. It notes that many consumer items, such as cameras have been downsized by manufacturers without any incentive from the government.

But that comparison is "incredibly dumb," points out Sam Kazman, chief counsel for the Competitive Enterprise Institute in Washington, D.C. "Cameras are products you carry around on cords around your neck. There’s a tremendous incentive to make them smaller and lighter. But with fuel prices staying the same, there’s no indication that market forces have made cars lighter."

Since 1988, Kazman and CEI have fought CAFE, calling it "blood for oil." In 1992 they sued NHTSA over the agency’s insistence that CAFE wasn’t killing anyone. The court found that NHTSA had used "fudged analysis," "statistical legerdemain," and "bureaucratic mumbo-jumbo" in order to avoid dealing with CAFE’s safety impact.

Unfortunately, NHTSA won the next time the case returned to the court, because the judges said that while they were troubled by the safety issue, a bureaucratic agency deserves a certain amount of deference.

And so, the deception continues. As do the deaths.