On the edge of the Auschwitz concentration camp, in an abandoned building about a dozen Carmelite nuns occupy themselves praying for the souls of six million victims of the Nazi terror who died on those grounds over four decades earlier. A 23-foot cross stands outside. But around this handful of peaceable nuns and their humble home swirls a controversy that has a lot of people saying a lot of stupid things, and the longer it continues will bring discredit to both sides. 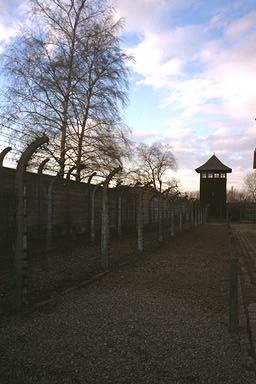 The controversy began not long after the convent was established in 1984, when Jewish leaders objected to the establishment of a Catholic place of worship on what they consider to be a Jewish shrine. It appeared to end last year, when several leading Roman Catholic cardinals, including Francis Cardinal Macharski of Poland, head of the Archdiocese of Cracow, stated in writing that the convent would be moved no later than February 1989 and that a Christian-Jewish dialogue center would be constructed instead about a mile down the road. The controversy flared up again when February came and went and the convent remained.

The protests culminated in July when a small group of Jews from New York, headed by a rabbi known for his radicalism, scaled the walls of the convent, only to have nearby Polish workers douse them with water and beat them. While many Jewish groups criticized the demonstrators for violating the seclusion of the nuns, they reacted angrily to the treatment of the protesters. Leon Wieseltier, literary editor at the New Republic, wrote in the New York Times that "Catholic penance at Auschwitz is appropriate.... The Jews of Europe were almost completely exterminated by Christians who called themselves Christians." Oh my. Surely he knows that being a Christian and calling oneself one are two different things, and anyway the Nazis never made a great effort to tie themselves into any religion, much less one that could be construed as mandating greater allegiance to God than to Hitler.

Meanwhile, Josef Cardinal Glemp, the Primate of Poland, threw gasoline on the flames with a statement implying that the demonstrators may have intended to kill the nuns and destroy the convent. Cardinal Macharski, who oversees the diocese that includes Auschwitz, announced that in response to the intrusion the construction of the center for Christian-Jewish dialogue would be halted.

Now wait a minute. The resolution of this issue is not that difficult. The Church has agreed to move the convent and has found no justification to the contrary, and it has offered no valid excuse not to honor that agreement. Further, it is difficult to see how the purpose of the convent would be compromised by moving it to an area just outside of Auschwitz as opposed to right on the grounds. Prayers offered up to the Lord are not diluted by being offered off-site. Conversely, anything short of a move will continue to inflame Jewish passions.

Sadly, however, a solution so obvious to an outsider may not seem so to one caught up in the volatile history of Polish-Jewish relations. Thus, while many Americans and indeed many Jews think of the Holocaust as a particularly Jewish tragedy, the Poles are painfully aware that of the six million Jews killed in Europe, half were Polish Jews. Three million Christians Poles were also killed. In all, six million Polish citizens died in the camps, one of every six people in the country. At the Auschwitz camp itself, one to one and one-half million non-Jewish Poles are thought to have perished, many of whom were priests and nuns. Michael Pressler, president of the New York Polish American Congress and a Catholic prisoner at Auschwitz for more than three years, said it "is the site of Jewry’s greatest tragedy, but it is also where many Catholics like me suffered and died alongside the Jewish victims."

Further, several other groups, in addition to Jews, were singled out, including communists, homosexuals, and gypsies, with the last almost wiped off the face of the earth. Thus, it is untruthful to many Poles to hear of the Holocaust spoken of in purely Jewish terms, or to hear that Auschwitz must be a Jewish shrine, with not even the smallest section to be used by any other religion.

Conversely, the dousing and beating of Jewish protesters trespassing on the convent may seem to be an isolated incident motivated only by a wish to defend helpless nuns, but some see it as part of a long history of Polish anti-Semitism. For example, in the 1930s, the country passed restrictions on Jews entering universities. At times, Jews have been forbidden to hold certain occupations. Every right-wing and center prewar political party was to some degree anti-Semitic, and some priests preached openly against Jews from the pulpit. In 1968, a government-sponsored campaign drove many of the remaining Jews out of the country so that today there are fewer Jews in Poland than in some blocks of Manhattan, an estimated three to five thousand. Some say it is no coincidence that most of the camps built and most of the Jews killed were in Poland.

Actually, it is no coincidence. Most of the camps were in Poland, and most of the Jews tortured and killed were in Poland because most of Europe’s Jews were in Poland. The workers built the camps not with a sense of joy or accomplishment, but as forced laborers under pain of death. Poland has had its share of anti-Semitism but was for centuries more open to Jews than Western European states. One reason there were so many Jews in the country when World War II began was because they immigrated from other nations whence they were driven. Polish history under the Nazi regime is replete with examples of courage such as that of Zofia Kossak-Szczucka, who saw it as her duty as a Polish Catholic to rescue and aid Jews, notwithstanding that this was punishable by summary execution. 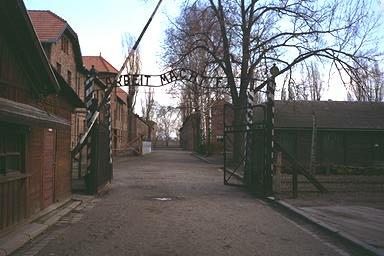 The sign over the entrance reads: "Work Brings Freedom." It was a lie.

Wieseltier himself notes that his own mother "owes her life to the courage of a Polish family." At the same time Poles, encouraged by the Communist government, have often pretended that Polish Jews were killed because they were Poles, rather than being singled out as Jews.

Notes Jewish author Michael T. Kaufman: "There were times when school trips omitted visits to the Jewish pavilion at the adjacent Auschwitz work camp and instead stressed the lives and deaths of those inmates and victims who wore red badges marking them as Communists."

Kaufman sums up the Polish-Jewish conflict as only a long-time observer could. He writes:

My head would literally ache from trying to sort out the contradictory subjective memories of Poles and Jews who all saw themselves as victimized peoples. Clearly the history of the entire seven-hundred-year relationship between Jews and Poles was viewed very differently by Jews and gentiles, with Poles generally stressing their hospitality to a people banished by others while Jews emphasized their persecution.

All of this makes the Auschwitz furor far more understandable. There are good, honest people on both sides of the conflict. Unfortunately, a fight often brings out vultures, and these vultures have "Know Nothing" written all over their tail feathers.

As a Catholic with a Jewish mother, I have been, conscious of prejudice towards members of both religions. Everything I have seen bears out the conclusion, as one person put it, that "anti-Catholicism is the intellectual’s anti-Semitism." While anti-Semitism, at least of the boldest form, usually takes the form of a Ku Klux Klanner on Geraldo blaming America’s downfall on a Jewish conspiracy, it is anti-Catholicism that is to be found on the pages of our most respected newspapers and magazines. Although Rome’s detractors don’t need a special occasion to vent their spleens, the Auschwitz affair made some giddy with excitement. Wrote the Boston Herald:

People of every faith were scandalized ... the coldness of it was numbing: On the spot where one-quarter of European Jewry was martyred, the church that for 1,000 years had done so much to feed anti-Semitism intended to set up shop.

Washington Post columnist Richard Cohen compared the Vatican’s silence on the Auschwitz affair to its alleged silence during the Holocaust and made the astounding assertion that setting up a tiny convent on the camp grounds with an accompanying cross "claims Auschwitz for the church." (In fact, the cross marks a gravel pit where Poles were systematically shot to death from 1940 to 1941, before Jews started arriving at the camp in large numbers.) The indefatigable Wieseltier goes on to say that the cross’s "shadow, with all due respect, is sickening."

Both the Herald and Cohen invoked the shopworn old fiction, rooted in German leftist Rolf Hochhuth’s 1963 play The Deputy, of a Vatican that reacted to the pre-meditated murders of millions with only silence. While extensive refutations of the charge have appeared elsewhere, suffice it here to say that many contemporaries of Pius XII could not have disagreed with playwright Hochhuth more. At the occasion of Pius’s death, Golda Meir, then Israeli ambassador to the U.N., stated, "When fearful martyrdom came to our people in the decade of Nazi terror, the voice of the pope was raised for the victims."

Thus, having just stated that the Auschwitz controversy is less foolish-sounding than it might seem, many on both sides agree that it is potentially damaging. Intolerance towards Catholicism stems from the same cesspool that gives rise to intolerance towards Judaism. Some Jewish leaders are already taking the lead in condemning anti-Catholic rhetoric. Anti-Semitic bigotry is also loathsome. It is ridiculous for representatives of these two great religions — the religions of my parents — to be at each other’s throats. The detractors of both feed off such hostility.