It was probably just a matter of time. The Washington Post tried; really it did. But ultimately, like Bill Clinton, it couldn’t restrain its loathing of the "military-industrial complex." The first crack appears to be two articles by Post foreign-service correspondent Molly Moore that the paper prominently displayed on Page One. They express in exquisite detail the callousness and brutality of American forces — albeit with no evidence to show for it. 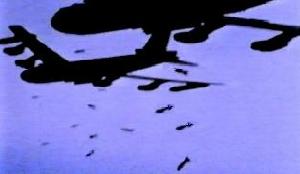 When these strike, they have a habit of leaving holes behind.

It’s long and horrifying, with more carnage than a Sam Peckinpah movie.

"In an instant," began Moore, "a missile sliced through the front end of the trailer. Witnesses said the explosion that followed scattered the arms, hands and feet of children across the road." She added, "Thirty minutes later, as rescuers struggled to carry the last of the injured and dead into a nearby house, two rockets slammed into the room where most had been taken, survivors said. Some bodies were thrown into a nearby stream, the rest buried under heaps of rock and dirt."

Then come the heart-wrenching, damning quotes. "’The Americans say they can see anything on the ground,’ said Fazal Rabi, 30, who said he lost 12 family members in the attacks, including two sons and a daughter. ’These were children. We are not Mullah [Mohammad] Omar or Osama bin Laden, we are poor farmers.’"

This tale may be true. But for all the horrific descriptions of shattered bodies, homes, and vehicles — along with two photos by Moore herself, there’s absolutely no reason to believe so.

Physical evidence? While not admitting so explicitly, Moore reveals there isn’t any. "Today, the room where the last rockets hit is nothing more than a heap of rocks and dirt in the midst of an otherwise undamaged house," she writes. "Its mud walls are intact, sheep and cattle are penned safely in the courtyard, and debris from the attack has been carefully gathered by the house’s owner."

The description is intended to provide irony by contrast, as with: "Omaha Beach today may be the most peaceful spot on earth." But what Moore’s description really shows is that even in a country wracked by poverty and two decades of war, just a few months after an alleged bombing attack there’s nothing to show for it but a heap of rocks and dirt and unlabeled debris.

Oh, and there was a tractor with a hole in it, said the reporter. Aha!

Moore tries to make the Army spokesmen in her story something akin to an Enron executive too inept to take the Fifth. Yet they speak wisdom nonetheless. In October, in first denying the village was attacked, Joint Chiefs of Staff Chairman Air Force Gen. Richard B. Myers said: "I don’t know exactly what you’re talking about. But every instance of those kind of allegations, we can usually spot bomb craters near things."

Bingo! There are still places in Vietnam that look more cratered than the face of the moon. But the high-explosive bombs and missiles that struck this Afghan town are so darned smart they can instantly wipe away evidence that they ever hit, right down to filling the holes.

What of forensic evidence? There are more flying body parts in Moore’s piece than in Texas Chainsaw Massacre III. Page One carries one of her photos described as showing an Afghan displaying his child’s injured foot. Now, in a country that practically has more land mines than residents, missing feet are commonplace.

What’s remarkable is that though the foot is but a tiny part of the photo (Moore’s decision as photographer) and newspaper photos aren’t very clear, the appendage looks healthier than what you see on Desenex commercials. Mostly the photo depicts lots of smiling Afghan men.

And where are all those bodies? The closest we’re offered is another Moore photo, this one depicting an apparent shrine of indeterminate age made of sticks and colorful cloth.

And that’s it. The front-page Post piece is based entirely on anecdotes from tribesmen in a country where the national motto should be "duplicity." The villagers could be lying on behalf of the Taliban or for a warlord particularly eager to see Yankee go home so he can conquer the neighbors.

So why is this article even in one of the nation’s most influential newspapers, much less on Page One?

It may help to know that just two days earlier, February 11, Moore’s front-page story was: "Villagers Released by American Troops Say They Were Beaten, Kept in ’Cage.’"

"Several of the 27 former prisoners, who were released Wednesday, said U.S. soldiers treated them so harshly that two men lost consciousness during the beatings while others suffered fractured ribs, loosened teeth and swollen noses," she wrote.

Then the quotes. "’They were beating us on the head and back and ribs,’" said Allah Noor, 40, a farmer and policeman for the new government who said he suffered two fractured ribs at the military base where the men were imprisoned. ’They were punching us with fists, kicking me with their feet. They said, "You are terrorist! You are al Qaeda! You are Taliban!’"

Again the evidence was entirely anecdotal. Again the accompanying Moore photo shows the opposite of what her story claims. Six alleged beating victims, including Noor, are casually sitting around a living room.

In 1981, Washington Post reporter Janet Cooke won a Pulitzer for a heart-wrenching story about an eight-year-old heroin addict — who never existed.

Always sensitive to depicting both sides, Moore again allowed American authorities to deny, deny, deny. But then, what else would you expect of beating beasts?

Still, there were those lines that just don’t read right. "The next morning the U.S. soldiers tore off the men’s clothing," wrote Miss Moore, "and ordered them to put on blue uniforms, the detainees said. At one point, Akhtar Mohammad, 17, said he lost consciousness."

Really? From having his clothes torn off or from wearing blue?

Now it just might have been helpful if Miss Moore had told her readers that two months earlier the Justice Department released a copy of "a captured al Qaeda training manual [that] had instructed those held prisoner to tell journalists that they had been beaten."

The wording in quotes is how it appeared in—by golly!—the Washington Post (by a different reporter) the day after Moore’s beating piece appeared. Perhaps Moore thought mentioning the handbook would disrupt the flow of her piece; if so, she was right.

Now the stones tossed into the river are creating circles, though for now mostly in the paper itself. The Post ran a lengthy editorial based in part on Moore’s reporting, and the Post’s syndicated columnist Richard Cohen has written a "Say it ain’t so!" hand wringer. Okay Richard, it ain’t. Or at least there’s no reason to believe so; while there is reason to believe Moore is omitting vital details.

A paper with Janet Cooke as part of its legacy certainly knows the value of demanding evidence from reporters. And while nobody ever expected the Washington Post to play cheerleader in this war, playing it straight shouldn’t seem to be too much to ask, either.