There’s good news for all you consumers of chips fried in that fake fat we keep hearing about, Procter & Gamble’s olestra. Two recent studies in prominent medical journals strongly indicate they won’t make you sick to your stomach or your intestines, and you don’t need to eat them within 15 yards of a bathroom.

Sold under the Wow!, Utz, and Pringles brand names, chips made with olestra have a third to a half fewer calories than chips cooked in any type of oil. That’s because the molecules in olestra are too big to be absorbed, so they just slip out of the body like a thief in the night.

In a nation in which 55 percent of us are officially obese and snack food consumption is a mania, this would seem good news. My initial reservations as a chronicler (and perhaps a Cassandra) of our obesity epidemic is that people might simply eat so many more olestra chips as to wipe out any advantages from the reduced calorie intake, though limited evidence now suggests that’s probably not happening.

Others, however, most notably Michael Jacobson’s Center for Science in the Public Interest (CSPI), have long been hollering that the chips are downright dangerous, causing any manner of gastro-intestinal problems of which only some may be mentioned in a family newspaper.

The first study, in the Journal of the American Medical Association gave two groups totaling over 1,100 person a number of chips all at once, to be eaten while watching a movie. Neither knew which type of chip they were eating, that fried with olestra or with an oil.

Now you’re probably thinking: If it wasn’t the chips that made those people feel ill, what movie were they watching? Don’t blame the film, but we’ll get to that.

In any case, Jacobson was not impressed. You don’t give people one dose of this test compound and expect to find a problem," he sniffed. Actually, to read his group’s literature, you sure would expect it. But last month, the results of a longer study did appear.

Appearing last month in the Annals of Internal Medicine, it lasted six weeks and again comprised two groups of which neither knew what type chips they were eating. The persons could eat to their hearts’ content, so the researchers probably had no trouble getting over 3,000 volunteers.

The findings: "Clinically meaningful or bothersome gastrointestinal effects are not associated with unregulated consumption of olestra corn and potato chips in the home," stated the researchers. Specifically, "The test groups did not differ significantly in the proportion of participants reporting any of the eight individual gastrointestinal symptoms, except that a higher percentage of controls [eaters of the non-olestra chips] reported nausea.

"Our results are consistent with those of other studies in which participants consumed olestra snacks under ordinary snacking conditions," said the authors, from Hill Top Research in Cincinnati.

They did find one thing that anti-olestra activists might latch onto but won’t if they’re smart.

The olestra eaters during those six weeks had about four days in which they felt they had extra bowel movements, compared to about three days for the control group.

If this hardly sounds like the equivalent of Montezuma’s revenge, it isn’t. Indeed, there was no impact on daily activities.

But when you eat something that’s not digested, be it fiber from bran flakes or olestra from Wow! chips, you can expect to go to the bathroom a bit more. In what’s been referred to as a constipated society (due to our small fiber intake), this is hardly a problem. Constipation has been linked to all sorts of nasties, including hemorrhoids and diverticulitis, an inflammation of the bowel.

Now back to why so many people who simply thought they might be eating olestra chips felt ill.

Those people in the theater and the ones in the six-week study who showed illness symptoms despite eating the non-olestra chips did so because they thought their chips were made with olestra and because they’ve heard so many scare stories, most originating with Jacobson’s group. I’ve heard people say they were sick of hearing from CSPI, but in this case it was literal.

CSPI knows about the nocebo effect and has used it mercilessly.

Thus, in cities test-marketing Frito-Lay chips fried in olestra in early 1996, CSPI broadcast warnings that the chips would make consumers ill, providing specific symptoms to look out for, and giving a toll-free number for symptom reports. It later announced: "The more we publicized our interest — and our toll-free number — the more complaints we learned of." Duh!

Indeed, the campaign was so effective Frito-Lay began receiving complaints from consumers in its three Midwestern test-market cities before the product ever reached store shelves. Now, THAT’s a powerful chip. 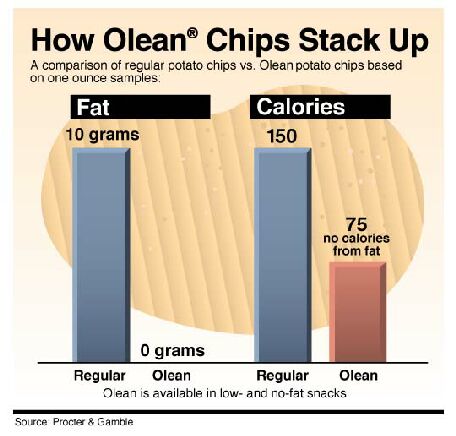