(Beijing, China) A brief visit to Beijing is enough to show that sometimes the term "developing nation" is more than a euphemism for a rat hole.

True, Beijing is not a place that would make many American vacationers — used to visiting German castles and British cathedrals — feel comfortable. The air in this densely-packed city of over seven million is foul. The streets are packed with a combination of motor vehicles, bicycles, and tricycles used for transporting both people and amazingly large loads. Vehicles constantly avoid collision by the width of an onion skin — if they avoid it at all.

The police, while omnipresent, don’t appear to respond to accidents. Their main purpose seems to be intimidation: letting citizens know that the new "open" China isn’t quite as open as some would like. 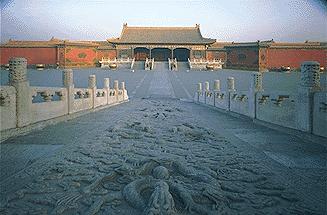 Tiananmen Square, on the day I visited it, was filled with smiling adults and packs of the cutest kids you could imagine. Kites shaped like birds, dragonflies, and butterflies vied for the limited airspace. Only Mao’s beaming face from his huge portrait across the street served as a reminder of the horror of six years ago.

To most Americans, many of the available foods would look like something out of the Little Shop of Horrors. The fixed menu at the conference I attended had such delicacies as diced turtle, "goose webs [actually the whole foot] and fish lips," any variety of sinews, and "pork knuckles." We opened each menu as apprehensively as if it were a letter from the IRS. Markets away from the hotel featured a variety of meats on a skewer, most of which were unidentifiable but one of which was duck fetuses, five per stick.

Macho men who like to swallow the worm sometimes placed in tequila bottles might choke on the equivalent in some Chinese booze bottles — a coiled three-foot snake. Dog is also served. Fortunately, I never said, "What a delicious meal!" only to find I’d just eaten Lassie. Nonetheless, a few of us did pass by one of Lassie’s cousins being skinned on the street. Br-r-r-r.

But the most remarkable thing about the Chinese isn’t that they eat dogs but that they work like them. Most people apparently work seven days a week and long days at that. They have but a handful of holidays a year, the main one being the Chinese New Year. Much more so than New York, Beijing is a city that doesn’t sleep at night. Construction workers can be seen building the city even at midnight. Yet to the longtime observer of China, what is so interesting here is that they are not just formally employed for such long hours but that so many of them are truly being industrious.

There are still examples of the relationships summed up by the old Soviet saying, "They pretend to pay us, and we pretend to work." One "Friendship Store" between Beijing and the Great Wall was a bizarre montage of different colors of pink. I couldn’t understand why until I saw somebody painting it. He would take a few swipes with a brush and then simply sit with his back to the ladder staring off into space.

But in Beijing itself, the people move with a sense of purpose. Nowhere is this more apparent than in the private markets that have sprung up in the last few years. Here everything — from a huge variety of clothing, to silk and other cloth products, to electronics, to art work — is available. Readily available also is the bootlegged software that China promised to crack down on. (I wouldn’t say having myriad men trying to sell me $100 CD-ROMs for $5 is much of a crackdown.)

No, you can’t see it from the moon, but it’s still a Great Wall.

To say the sellers are aggressive doesn’t do justice to the term, but many are friendly and smiling, the sort who would be terribly offended if you accepted their opening bid instead of trying to bargain them down. Even the cushy jobs such as working in hotels (all still state-owned) and the Friendship Stores have now bowed to market forces. An inquiry confirmed what I had already suspected; that while such jobs formerly went to the children of Party members, they were now — like U.S. stewardess jobs of yore — allocated on the basis of looks.

This wouldn’t please American feminists, but then American feminists are no more evident than Americans in general. In four days I’ve seen only two apart from my group: a mean-faced, slobby hulk of a woman accompanied by her heavily-tattooed husband wearing a Harley Davidson sweatshirt with the sleeves cut off. Both were stuffing their faces at a McDonald’s in which my group had taken refuge after too many run-ins with the local cuisine. With ambassadors such as these two, I was glad they were the only ones around.

But if nothing else, these McDonald’s denizens provided a stark contrast between the decadence and complacency into which so much of America has fallen and the leanness and eagerness of a people bursting from a repressive statist society into a showcase of industry and entrepreneuralism. The Beijing Chinese may be mostly poor, but they’re entirely proud.

Whether China’s government will continue to allow market reform or slam the door shut as tightly as it did on electoral freedom six years ago at Tiananmen remains to be seen. In the meantime, it is heartening to see the Chinese people display the work ethic that once characterized America. Perhaps as they have learned from us, we can learn from them.