For four years, politicians and the media have ignored the growing mass of scientific evidence that there is no such thing as Gulf War Syndrome. Rather than concede that the syndrome is nothing more than a combination of stress-related illness and the normal rates of disease among the 700,000 vets of Desert Storm, they have instead concentrated on anecdotes from former soldiers whom they dub experts. And the more incredible the tales, the greater their credibility. 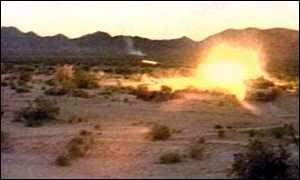 Consider the case of Brian and the Amazing Technicolor Vomit. Since last May, Brian Martin, formerly a Humvee driver in the 37th Engineer Battalion, has been the star witness/expert/victim on Gulf War Syndrome. He has recently been featured on 60 Minutes (twice), Nightline, CNN and a variety of talk shows, as well as by the New York Times, Playboy, the Associated Press and others.

It’s easy to see why Mr. Martin fascinates reporters. Together with his wife, he apparently comprises a whole activist group, International Advocacy for Gulf War Syndrome. His list of symptoms goes on forever. And he’s always quick with a quote, such as, "I used to jump out of airplanes, and now I can’t even jump up and down." Everything he says, reporters relay as gospel — except the bit about the glowing vomit.

I interviewed Mr. Martin on two occasions, both times asking what his Gulf War Syndrome symptoms were. Both times he included such implausible ones as lupus (an autoimmune disease that rarely afflicts men) and "early Alzheimer’s." Sensationalist reporters eat up such claims, but to a medical writer they send red flags popping up all over the place.

Then the red flag sprang up. Mr. Martin told me what he would later tell a congressional panel headed by Rep. Chris Shays (R., Conn.) last September. After returning from the Gulf, he testified, "during PT [physical training] I would vomit Chemlite-looking fluids every time I ran, an ambulance would pick me up, putting IVs in both arms, rushing me to Womack Community Hospital. This happened every morning after my return from the war." Chemlites are tubes containing chemicals that glow when the tubes are snapped.

In both conversations with me, Mr. Martin repeatedly referred to his vomit as being "fluorescent" and said these daily bouts of vomiting lasted from March 11 to Dec. 31, 1991.

Thus we are dealing with a man who insists both that his vomit glows and that he had a squad leader, a platoon leader and a company commander who heartlessly insisted that he do physical training "every morning" for 10 months, knowing that "every morning" he would end up in the hospital with IV tubes in his arms. Yet, extraordinarily, no reporter before me ever relayed this information to his readers.

It’s not because no reporters heard this claim. At least two covered the September hearings and wrote articles about them; both omitted the glowing vomit. One was AP reporter Donna Abu-Nasr. I asked her why she hadn’t mentioned the vomit. "I didn’t notice it," she said.

Didn’t she think the remark impugned his credibility? No, she answered: "You have to remember he’s been on talk shows, and they’ve written a lot about him." I started to point out that this was circular reasoning, but she hung up on me.

Ms. Abu-Nasr’s defense of Mr. Martin’s credibility may sound laughable, but it is typical of how Gulf Lore Syndrome works. Telling incredible stories somehow makes you a credible witness.

Consider former Seabee Nick Roberts, another victim/expert who’s almost as popular with reporters and Congress as Mr. Martin is. Mr. Roberts has repeatedly been called before congressional panels to testify. Articles by the AP, USA Today and other outlets — even a cover story in Esquire — portrayed him as a prototypical victim of Gulf War Syndrome.

Mr. Roberts claims to have begun experiencing symptoms of lymphoma within weeks of what he says was a nerve gas attack. No reporter citing his claim has ever relayed to his readers that this is a medical impossibility. Lymphomas take years, even decades to develop.

Mr. Roberts isn’t the only one to claim to have violated the laws of medicine. Michael Adcock, the first Gulf vet whose death was widely attributed to Gulf War Syndrome, said he came down with lymphoma within days of arriving in the Gulf.

A few years earlier, Mr. Roberts also told Congress, and the media faithfully reported, that 10 of 33 men in his unit had developed lymphomas shortly after the war — which, if true, would be the most incredible cancer cluster in history.

Yet five months after Mr. Roberts made that statement, the Veterans Affairs Department’s Persian Gulf Registry recorded only eight cases of lymphoma among all U.S. Gulf War veterans, and there was no cluster of cases.

I interviewed Robert Newman, the Shays staffer who invited both Mr. Martin and Mr. Roberts to testify. I asked him first about Mr. Martin’s alleged daily spewing of glowing vomit. "In the overall scheme of things," Mr. Newman told me, "that’s got to be a minor point." Hmm.

Yet reporters typically fail to relay such important information, presenting instead an inaccurate account that bolsters the credibility of purported Gulf War Syndrome sufferers. Besides Ms. Abu-Nasr, the other reporter who covered the hearing at which Mr. Martin and Mr. Roberts testified was John Hanchette of Gannett News Service. Mr. Hanchette, a 1980 Pulitzer Prize winner, has written or co-written more articles on Gulf War Syndrome than any other national reporter — more than 100.

In his coverage of Mr. Martin’s testimony, Mr. Hanchette not only reduced Mr. Martin’s symptom list to a handful, omitting the glowing vomit, but also made the dubious but authoritative-sounding claim that the symptoms were confirmed by "federal medical exams."

Yet Mr. Martin’s doctors told me that some of the illnesses Mr. Hanchette says are in their records haven’t been experienced by any of their Gulf vet patients. Mr. Hanchette did not return repeated phone calls seeking comment. His editor, Jeffrey Stinson, told me, "I’m not going to sit here and go over this kind of stuff with you. You can sit here and nit-pick. He’s a Pulitzer Prize winner." He subsequently hung up on me.

Similarly, in a 60 Minutes segment shown last August, Ed Bradley relied on Mr. Martin’s claim that after a bunker complex exploded and chemical alarms went off, only the chemical weapons sergeant, to quote Mr. Bradley, "put his suit on right away. Others did not. He is the only man in this group who is not sick."

Mr. Martin told Mr. Bradley and other reporters that he and his fellow soldiers didn’t even have access to their suits — a claim that makes the military look horribly negligent and supports the allegation that these men were exposed to nerve gas.

The problem is, it isn’t true. Five other vets from the 37th Engineer Battalion appeared on that 60 Minutes broadcast. All of them told me that they and every soldier they saw were at "MOPP 4," meaning fully suited. I also called the battalion executive officer, Maj. Randy Riggins, now retired. Mr. Bradley’s portrayal "was a total farce," said Maj. Riggins.

Did the vets make it absolutely clear to Mr. Bradley that they had put on their protective suits? "When we were talking to Ed Bradley, yes we did tell him that we went to MOPP 4 when we were at Khamisiyah," one of the vets who appeared on 60 Minutes told me. Another says he told the producer, Liza McGuirk.

Mr. Bradley did not return my calls seeking an explanation, and although Ms. McGuirk agreed to an interview, when I started to ask her about what these vets had said, she hung up on me.

So here’s a suggestion: The next time a reporter tells you, in effect, to ignore the conclusions of two Department of Defense panels, a National Institutes of Health panel, an Institute of Medicine committee, and the Presidential Advisory Committee in favor of sadly disturbed vets with unbelievable stories — hang up on him.