According to the United Nations, anywhere from 140 to 250 million preschool children don’t receive enough vitamin A. Improving vitamin A intake could reduce childhood deaths by as much as a third in highest-risk developing countries and eliminate half a million cases of blindness. Rice is a staple food for people in over a hundred countries but provides virtually no vitamin A. So scientists transferred into it two genes from the daffodil (thus giving the rice a gold color), plus one from a bacterium. By doing so they fortified the grain with beta-carotene, which the body breaks down into vitamin A. This is called golden rice.

Potrykus amid stalks of golden rice.

Unfortunately, environmental groups fearful of the increased spread of genetically modified foods are fighting the introduction of golden rice on the grounds that it is a hoax and that the nutrients it provides are essentially worthless. For the real dope on this story, AO’s Michael Fumento, a senior fellow with the Hudson Institute, went straight to golden rice’s chief creator, Dr. Ingo Potrykus. Potrykus was born in Germany in 1933. He began his scientific career at the famous Max-Planck-Institute for Plant Breeding Research, öln, from where he moved to the Max-Planck-Institute for Plant Genetics, Heidelberg; then to the Friedrich-Miescher Institute, Basel, Switzerland; and finally, in 1986, to the Swiss Federal Institute of Technology, Zurich. His research concentrated on contributions to food security in developing countries by developing and applying genetic engineering technology to crop plants such as rice, wheat, sorghum, and cassava. Since his retirement in 1999 he has focused on the promotion of golden rice for developing countries.

** AO: Do you believe biotech companies have "overhyped" the value of golden rice? **

Potrykus: I did not follow the advertisements of the industry, but it is difficult to overhype the value of golden rice.

** AO: How many companies had to grant you licenses for golden rice to be distributed? **

** AO: Isn’t it true that golden rice not only contains added iron but has been engineered to make the iron already present in rice more readily absorbed by the human body? Has Greenpeace or the Union of Concerned Scientists [UCS] made any mention of this? **

Potrykus: This is true and the opposition has, so far, ignored this. However, the golden rice we can currently give out has only beta-carotene. For the iron traits we again first have to settle the [licensing problems].

Golden rice** AO: I have heard that research is already being conducted on a new and improved version, which will express vitamin A at a higher level. Is there any truth to that? Also, what about the claims that people must have a diet rich in fat and protein in order to absorb beta-carotene? **

Potrykus: The golden rice that everybody is talking about is the first prototype, and we are, of course, continuously working on its improvement. It is true that uptake of beta-carotene requires fat (though not protein), but there is oil in rice endosperm [the nutritive, starchy mass in the center of grains] that will be studied to see whether it alone is sufficient for efficient uptake.

** AO: To your knowledge, has Greenpeace, other advocacy groups, or any other biotech company, misrepresented your words on the nutritional value of golden rice? **

Potrykus: Greenpeace has a strategy to convince people that golden rice provides so little beta-carotene that it is useless. This group and its allies base their argument on 100 percent of the recommended daily allowance [RDA], thus hiding the fact that far lower values are effective against mortality, morbidity, and blindness. The golden rice that the public will receive will provide true benefits at just 300 grams [10.5 ounces] per day.

** AO: Greenpeace and the UCS claim that the timing of the announcement of golden rice was "suspicious," intended to give the agbiotech [agriculture biotechnology] multinationals a needed publicity boost. Can you refute this? **

Potrykus: This is so stupid. When we initiated our work ten years ago, agbiotech definitely had no acceptance problems.

** AO: Do you see golden rice as "the answer" to nutritional problems in the underdeveloped world where rice is a staple, or is it merely a tool to be used alongside others? **

Potrykus: Golden rice is meant only to complement traditional interventions and to improve the vitamin A intake in poor populations. That said, it will probably be the cheapest and most sustainable solution.

** AO: Do you see a role for golden mustard, golden canola, or other transgenic plants in providing more vitamin A and more nutrition in general to people in underdeveloped countries? **

Potrykus: Of course I see a role for further food crops providing beta-carotene. We’ve already had discussions with scientists who want to introduce the trait into wheat, maize (white maize of Africa), cassava, sweet potato, banana, and so on. Naturally, the work with mustard and canola helps also. What I want is not only the addition of beta-carotene but nutritional improvement in general. That’s why I have also added the iron trait, and I am working on a high-quality protein trait.

** AO: Do you concur with the assertion that simply by raising nutrition levels of underdeveloped nations, we can help them become less poor, leading to overall better nutrition? **

Potrykus: Yes, I certainly do.

** AO: What do you think of Greenpeace’s insistence that it reserves the right to take "direct action" against golden rice test plots? ** 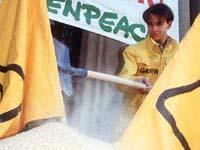 Greenpeace has declared the rice to be "fool’s gold."

Potrykus: If Greenpeace does this, they will be guilty of a crime against humanity.

** AO: What measures were taken in the past to address vitamin A deficiency, and what were the problems with those alternatives? Do you think that Greenpeace’s suggested plan of mass distribution of vitamin pills make sense in terms of distributing them to hundreds of millions of people? **

Potrykus: There is a need for distribution, fortification, dietary diversification, and education. All of these are important. These interventions have used an impressive amount of funds that have been spent over the last twenty years and have been very helpful. But we still have 500,000 blind children and millions of vitamin A deficiency deaths every year. The problem with vitamin A pill distribution is that it does not reach many of those who need it.

** AO: Greenpeace has declared the rice to be "fool’s gold." How do you respond to their accusation that it would take an incredible amount of golden rice consumption to give children the recommended daily allowance of vitamin A, plus prevent blindness? **

Potrykus: This is not true. The golden rice that will finally be given out to the public will be effective on 300 grams of rice in the diet per day.

** AO: In many parts of the world, people who eat rice value its whiteness. It has a special meaning to them. Will they eat rice that is not very white? Hasn’t this been a barrier to previous efforts in adding supplements to rice? **

Potrykus: This is a problem in some parts of the world, although probably not in India. People will have the freedom to decide whether they want healthy children or white rice. We are, however, working on a solution for the color problem, and we believe that we know how to solve it.

** AO: Critics insist that $100 million was spent researching golden rice, but others claim that this figure was total Rockefeller Foundation spending on rice research over ten years to hundreds of scientists. Can you clarify this? **

Potrykus: The total cost for golden rice development was $2.6 million, spent over ten years in the lab of Peter Beyer and myself. These funds were from the Rockefeller Foundation, the Swiss Federation, the National Science Foundation, and the European Union. The investment was approximately one-fourth of 1 percent of the money spent on traditional interventions. Compared to the $100 million—plus Greenpeace spends per year, this was a very small investment.