It’s too bad so few Americans got to see pictures of Winston Churchill wearing a Mohawk haircut. The photo, which ran in British papers after May Day riots in London, helps explain why McDonald’s decided to quit buying genetically improved (biotech) potatoes. And it helps demonstrate how the uproar over biotechnology has everything to do with anti-capitalism and very little to do with food safety or the environment.

When the Berlin Wall fell ten years ago, it wasn’t seen as good news by everybody outside of Russia. According to Patrick Moore, a co-founder of the powerful environmental group Greenpeace, you can count many environmentalists among the post-communist crestfallen. Moore says he left Greenpeace, and the "eco-extremist" movement, because of its radical shift away from science and humanity.

"Pro-Soviet groups in the West were discredited" when the Cold War ended, Moore wrote in the March issue of Oregon Wheat magazine. "Many of their members moved into the environmental movement bringing with them their eco-Marxism and pro-Sandinista sentiments." We saw their influence at the World Trade Organization’s (attempted) conference in Seattle last winter. Eco-activists joined anti-capitalists from all over the world. Mobs took to the streets, rioting and ransacking businesses. Global trade emissaries were forced to go home without ever meeting. And most of the public (along with some protestors, no doubt) wondered what the whole thing was about.

Shortly thereafter, many of the same people, still proud of their "Battle of Seattle," converged on Boston to protest the Biotechnology Industry Organization conference. Then in April, it was on to Washington, D.C., to protest the International Monetary Fund and World Bank meetings. One of the Seattle protest/riot organizers calls itself the Direct Action Network (Against Corporate Globalization). 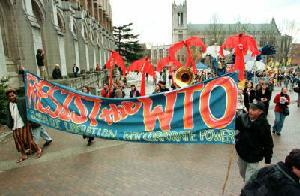 Protestors in Seattle literally dubbed this area "Red Square". The text at the bottom of the red wording reads: "Globalize liberation, not corporate power."

"Our current social and ecological troubles are rooted in an economic and political system that is going global, it proclaimed in a press release urging the protest. "Imagine replacing the current social order with a just, free and ecological society based on mutual aid and voluntary cooperation."

Should we spoil their fun by pointing out that this is exactly what Karl Marx "imagined" and what Josef Stalin and Cambodia’s Pol Pot implemented? Graffiti scrawled all around the capital during the protest urges rejection of corporations, period. It’s literally writ large: Capitalism is evil and corporations are the devil.

Which takes us back to May Day and the Churchill statue. May Day was the traditional Labor Day in the Soviet Union, when workers who toiled for the motherland got time off to parade through Red Square. Shriners on tiny motorbikes were not allowed, nor were clowns, but they always displayed lots of nice modern Soviet tanks and missiles. In support of their comrades, tens of thousands of anti-capitalist pig protestors would also turn out that day in Central London minus the weaponry, naturally.

Generally the London events have been peaceful, merely an affront to the eye and one’s basic sensibilities. This year, though, things got out of hand when a mob ransacked a McDonald’s restaurant, breaking windows and tearing down those famous "golden arches." And no, it wasn’t like carrying off the goal posts after winning the championship. This attack sparked an all-out riot, and a TV crew covering the McDonald’s incident was beaten. 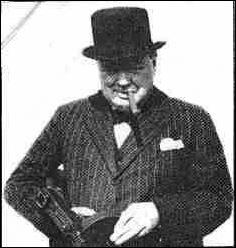 According to the Times of London, police were attacked with iron bars, scaffolding, bottles and beer cans. A brick smashed an officer in the face; a flying bottle struck a little girl. Shops throughout the area were ransacked. "The main casualty," according to the Times, "was the nation’s heritage." A statue of Churchill, the nation’s great war-time leader who gave the Iron Curtain its name, was smeared with red paint declaring that Prime Minister "Tony Blair will die." It was not a mere reminder that all humans are mortal.

Someone else ripped up a strip of turf and placed it on Churchill’s head to resemble the Mohawk haircuts some of the rioters wore, which it did even down to the green color. The Cenotaph, the nation’s memorial to its war dead, was desecrated with the slogan: "Why glorify war?" This would be like spray-painting "Who Gives a Rat’s Rump? on our Tomb of the Unknown Soldier.

Police had warned McDonald’s, which has become a global symbol for anti-Americanism and anti-capitalism, to close up shop for the day. The company closed all 50 stores in Central London to protect its employees. McDonald’s, like no other American company perhaps, has become a lightning rod for this kind of activity. French farmers recently vandalized their stores including dumping poo in the parking lots to protest "unfair" trade policies.

So it’s hardly surprising that McDonalds has been among the few large U.S. companies to reject biotech crops, specifically a potato (for their fries) made to control insects and viruses without the use of chemical pesticides. The potatoes are safe. Their "sin" is that they were developed by a major multi-national corporation and McDonald’s is the archetype (pun somewhat intended) of such corporations. Apparently it felt itself in no position to hold the line, though fortunately shareholders at other corporate giants such as Kellog’s, Coca-Cola, and PepsiCo voted to allow sense to prevail over scares. The "Capitalism Kills" crowd has lost its Berlin Wall.

But whether running amuck in London or Washington, or issuing misleading press releases and phony "studies," the greens are keeping the movement alive. Each time they win, the free world loses.