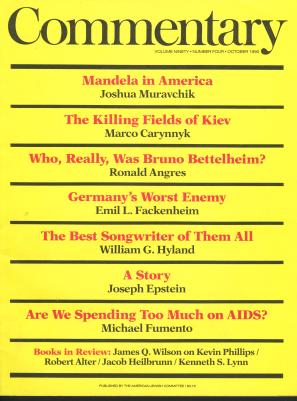 If there is one thing Americans seem to agree upon about AIDS, it is that we are not spending enough on the disease.

"The government has blood on its hands," reads a bumper sticker that is ubiquitous in major cities, "one AIDS death every half hour." AIDS activists, who are fond of asserting that AIDS is "not a homosexual disease," tell us in the same breath that the failure to spend more on it constitutes genocide against homosexuals. A recent public opinion poll shows, indeed, that most Americans favor increasing spending on AIDS.

But consider. This past year, reported cases of AIDS in the U.S. increased only 9 percent over the previous year’s tally. The federal Centers for Disease Control (CDC) of the Public Health Service (PHS) has been forced to lower greatly both its estimate of current infections and its projections of future cases.

Nor has the long-expected "breakout" of AIDS into the heterosexual middle class shown any sign of occurring. Former Surgeon General C. Everett Koop, who probably coined the expression "heterosexual AIDS explosion," now claims he knew "from the very beginning" that such a thing would never happen; Gene Antonio, author of The AIDS CoverUp? (300,000 copies in print), which predicted as many as 64 million infections by this year, now denies having made such a prediction.

At the recent international AIDS conference in San Francisco Dr. Nancy Padian put another nail in the coffin of the "breakout" theory when she reported the results of her study of 41 couples among whom the woman was originally infected and the man was not: over a period of years, only one man became infected, and that only after both he and his partner had experienced penile and vaginal bleeding on over 100 occasions.

Nevertheless, the current PHS allocation of about $1.6 billion for AIDS research and education higher than that allocated for any other cause of death. In 1990, the CDC will spend $10,000 on prevention and education for each AIDS sufferer as opposed to $185 for each victim of cancer and a mere $3.50 or each cardiac patient.

AIDS activists have answers to these statistics. Since AIDS strikes most often in the prime of life, they urge us to consider the years of lost productivity as a cost that could be avoided by more spending now on AIDS research. Yet every year cancer and heart disease each kills more than 150,000 Americans below the age of sixty, while this year AIDS will kill around 30,000 persons of all ages. Nor do the calculations of years lost take account of the fact that intravenous drug abusers, who make up a growing portion of those affected by the disease, have a very low life expectancy and an even lower expectancy of productivity.

But, say AIDS activists, the disease is overwhelming the nation’s health-care system, and this alone justifies increased spending on research. A figure repeated often in the media has been the Rand Corporation’s estimate that by 1991, direct medical costs for AIDS (that is, medical expenses only, with lost wages not included) could be as high as $133 billion, with up to $38 billion in 1991 alone. U.S. News & World Report flatly declared, "What is now becoming clear to an array of leaders in medicine, business, government, and academias that AIDS not only threatens untold death and suffering but could bankrupt America’s health system as well."

In fact, however, a typical AIDS case costs approximately the same as a terminal cancer case, about $40,000 to $50,000, which means that the 35,000 reported AIDS cases last year will end up costing the nation something less than $2 billion, or considerably less than 1 percent of this year’s total U.S. medical costs of approximately $650 billion.

Of course, localized emergencies can exist. New York City’s hospital system, running poorly even before AIDS, is clearly in a state of crisis even though cases in that city peaked. The reason New York, San Francisco, Los Angeles, and other such cities have been hit so by AIDS is that they are refuges for homosexuals and drug abusers.

With that in mind, the House and Senate are seeking to authorize $2.9 billion and $4 billion, respectively, over the next six years, mostly for these hard-hit cities and states. (Ironically, the bill has been cast as emergency relief for rural areas, apparently in the belief that voters have more sympathy for the problems of Peoria than for those of San Francisco or New York.)

This special allocation for AIDS, which comes on top of an earlier special allocation to subsidize the drug AZT, is almost without precedent. There is nothing similar for people with heart disease or cancer or diabetes or lupus or any number of other potentially fatal diseases (with the exception of end-stage renal disease).

What about the assertion that AIDS deserves more funding because it is contagious, while heart disease and cancer are not? In fact, AIDS is contagious almost exclusively through behavior, and modification of that behavior could in theory reduce future AIDS cases virtually to zero without another penny spent on research and without a single medical breakthrough.

An as-yet uninfected homosexual who avoids high-risk behavior will almost certainly never contract AIDS; but his chance of dying of cancer remains one in five. Indeed, male homosexuals outside of such high-incidence areas as San Francisco, Los Angeles, and New York, and whose HIV status is unknown, currently have less chance of getting AIDS than of dying of either heart disease or cancer.

It is said that even if research on AIDS does not yield a cure, spinoffs from that research could lead to cures and treatments for other diseases. In line with this idea, Congressman Ted Weiss (D.-NY) requested the Office of Technology Assessment (OTA) to prepare a report titled, "How Has Federal Research on AIDS/HIV Contributed to Other Fields?" The reviewer in the British medical journal Lancet, struck by the contrast between this tiny report and OTA’s customary "behemoth, exhaustive" efforts, noted that it was comprised of nothing more than opinions from an "unspecified organization of ’distinguished biomedical and social scientists,’" and that "For policy or polemics, this OTA production is a bust."

In fact, no life has ever been saved, no disease ever ameliorated, by AIDS spin-offs. As former NIH director Donald Fredrickson has pointed out, most AIDS research is far too narrowly targeted to lead to significant spin-offs. Indeed, most of the money spent by the PHS on AIDS (including for advertisements on late-night television like the one featuring a man who resolves not to go out on the town and "bring back AIDS to my family") does not involve clinical research at all.

This is not to say that no spinoffs are ever possible. After all, no one knew that the space program would end up introducing the world to velcro. But we did not embark on the space program because we wanted a new kind of fastener. If it is a cure for cancer we seek, we should spend money on cancer research, not on another disease entirely. As it happens, increasing spending on cancer at the expense of spending on AIDS might do more for both diseases: of the first three drugs approved for treatment of AIDS or its conditions, two — AZT and alpha interferon — were spin-offs of cancer research.

Among the deleterious effects of disproportionate spending on AIDS have been inevitable boondoggles, as great a problem in medicine as in national defense. In December 1988, NIAID announced two grants totaling $22.8 million to study non-drug-using heterosexuals in order, as the Associated Press put it, to "prevent a huge new epidemic."

Speaking on condition of anonymity, one prominent federal epidemiologist said of the study, "I think it’s complete bullshit." He added, "My sense was that a huge amount of money got dumped on NIAID and that by the time they got around to awarding the money a lot of good institutions had already been funded and all that was left was schlock."

Concentration on AIDS has in general prompted a de-emphasis of other medical diseases like Alzheimer’s, a cruel, debilitating malady that will continue to exact an ever higher yearly toll unless medical intervention becomes possible.

Nobody is more conscious of this than researchers themselves. It takes up to a decade to put a high-school graduate through medical school; thus, for now and for the immediate future, AIDS researchers are being drawn from other research areas, primarily cancer, and the rumblings from traditionally nonpolitical laboratories are growing louder and louder. Some are calling it "AIDS Resentment Complex," a play on "AIDS Related Complex."

Dr. Vincent T. DeVita, Jr., just before stepping down from his position as director of the National Cancer Institute (NCI), said that AIDS "has been an extraordinary drain on the energy of the scientific establishment." In fact, AIDS research has now weakened cancer research to the point where NCI’s ability to fund promising new proposals is lower than at any Lime in the past two decades.

Two top doctors left NCI in late 1988, partly out of frustration over this state of affairs. According to one of them, Dr. Robert Young, now president of the American Society of Clinical Oncology, "the superstructure of cancer research is being dismantled." Indeed, for non-AIDS work, NIH lost almost 1,100 employees between 1984 and 1989. At the same time, according to Science magazine, the number of NIH employees engaged in AIDS work increased by more than 400 to 580 workers or their full-time equivalents.

The most vocal opposition to spiraling federal AIDS expenditures has probably come from women concerned about breast cancer, which kills about 44,000 year; every two years as many wome die of breast cancer alone as the number of men and women who have died of AIDS over the course of the entire epidemic.

True, Congress is now considering bills that would appropriate funds for cancer screening in women, but the total to be allocated for both breast cancer and cervical cancer — the latter kills 6,000 woman a year and is virtually always preventable if caught early enough — is only $50 million, as contrasted with the $3 to $4 billion which Congress wants to spend for AIDS treatment programs over the next six years and which will probably not save a single life, from AIDS or anything else.

Is this right? Should a compassionate society allocate funds and research on the basis of media attention, on the basis of whoever makes the loudest noise? Or should it, rather, put its appropriations where they can do the most good for the greatest number of people?