"Fat but Fit." The slogan has undeniable appeal. With one-third of Americans certifiably obese (up from one-quarter just a decade earlier) and three-fourths overweight, it’s not just a slogan; it’s a sweet Siren song. But remember, the Sirens’ songs lured sailors to their doom. 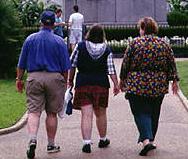 a September cover of People magazine. "Stop Trying to Be Thin and Start Trying to Be Healthy," declared the subtitle of a recent Washington Post Health article. And one zealous ABC-TV reporter told her audience in July, "Even the surgeon general now says it may be better to be fat and fit than thin and unfit." Actually, we haven’t had a surgeon general for two years. Oops!

Then there’s the onslaught of "fatlash" books that carry the message: "Don’t worry, be flabby." They include Glenn Gaesser’s Big Fat Lies, Laura Fraser’s Losing It, Dee Hakala’s Thin Is Just a Four-Letter Word and Just the Weigh You Are: How to Be Fit and Healthy, Whatever Your Size by Steven Jonas and Linda Konner.

Whatever your size? Absolutely! Glaesser’s book carries an endorsement from National Association for the Advancement of Fat Acceptance, or NAAFA, Chairman Charles Van Dyke, who weighs 600 pounds.

True, fat-acceptance groups such as the NAAFA have been pushing this line for years. But now it’s becoming mainstream. Perhaps it was inevitable after three decades of diet books promising their readers weight-loss magic and miracles, only to let them down each and every time.

All of this is horrific, because medical evidence keeps pouring forth showing that the obesity epidemic is far worse than we ever thought. Former surgeon general C. Everett Koop, the World Health Organization and top obesity researchers at Harvard and elsewhere agree that 300,000 Americans die prematurely each year because of obesity. After cigarette smoking, it is the nation’s largest preventable cause of death.

Most of these deaths are from heart disease. "About half of us die from atherosclerosis and obesity plays an enormous role in how we got there," according to the former director of the long-running Framingham Heart Study, William Castelli, a physician. Diabetes, cancer and stroke make up most of the rest of the butcher’s bill.

Studies from around the world and dating back many decades repeatedly have found that excess fat kills. The world’s largest obesity-research program (115,000 women) is the ongoing Nurses’ Health Study.

The average American woman is 5 feet 5 inches tall and weighs 150 to 160 pounds — which the study indicates is about 30 pounds too many to have a full life expectancy. Those who were in the lightest category (120 pounds or less) had the lowest death rates.

So whence all this fat-but-fit stuff?

Much of the alleged evidence for the thesis, including that repeatedly cited in Gaesser’s book and in an April 21 Newsweek cover story, comes from a study at the Cooper Institute for Aerobic Research in Dallas. It found fit obese men, as defined by their ability to stay on a treadmill, had a much lower death rate than unfit obese men but also — and here’s the important part — than nonobese men who couldn’t stay on the treadmill as long. The problem is that few obese men in that study, or in real life, for that matter, could stay very long on the treadmill. "That’s largely because most obese people don’t, or can’t, exercise much, and those who do become fit tend to lose weight," noted the July 1997 UC Berkeley Wellness Letter.

Indeed, one of the Cooper Institute researchers, Carolyn Barlow, noted their data show "you can’t say ’don’t lose weight, because there are health benefits to losing weight. It’s not okay to be overweight — a few pounds maybe, but not grossly overweight" (emphasis hers). Even the founder of the institute, Kenneth Cooper, said it’s hard to believe that fit, fat people can be as healthy as fit, thin ones, noting the many studies linking overweight to disease.

But can exercise make up for the health effects of obesity? A 1995 study tested the thesis. One group of men pursued a moderate nine-month weight-loss regimen, eventually losing an average of 21 pounds; another group remained obese but engaged in regular aerobic exercise. In nearly every measured risk factor for heart disease, it found the benefits of weight loss outweighed those of exercise.

"These results suggest that weight loss is the preferred treatment to improve coronary artery-disease risk factors in overweight, middle-aged and older men," concluded the study.

But what of those obese people (and their cheerleaders such as Gaesser) who proclaim on the basis of a few blood tests that they are in fine health? Gaesser writes of "Lucy" who, though 206 pounds at only 5 feet, 5 inches, "has excellent levels of cholesterol, blood sugar and blood pressure."

The trouble is that not only is Lucy a virtual waif compared to most of the fat-acceptance crowd, she also is only 30 years old. Give a few medical tests to a four-pack-a-day smoker at the same age and you can expect her to pass with flying colors, too. Just as almost nobody dies of lung cancer at 30, almost nobody dies from obesity at such a young age either (though I did lose an extremely corpulent friend from a heart attack at the age of 29).

It’s only after menopause, which usually takes place around the late 40s or early 50s, that a woman’s risk of dying of heart disease starts to increase. Let’s see how Lucy is doing when she’s up to 350 pounds and is 50. We might have to visit her at the cemetery, though.

One fat-acceptance argument that drives obesity researchers and nutritionists nuts because it’s so silly is, as Gaesser puts it in Big Fat Lies, that "no study yet has convincingly shown that weight is an independent cause of health problems" (emphasis his). First, when you see convincingly used like that, it usually means "they haven’t convinced me yet" and it’s implicit they never will.

More to the point, Gaesser is conceding that, yes, there certainly does seem to be a connection between obesity and certain health problems; it’s just not necessarily causal. Likewise, "Obesity in and of itself is not bad unless there are other conditions associated with it," says Liz Applegate of the University of California at Davis. But this is mere sophistry. You also could say, "A perfectly healthy four-pack-a-day smoker is as healthy as a perfectly healthy nonsmoker." The problem is that smoking, like obesity, lends itself to those "other conditions" that cause people to sicken and die.

You also could argue that the heavy, sharp blade of Madame Guillotine was not the actual cause of death of France’s King Louis XVI. Rather, it was those nasty "other conditions" — the severing of the vertebrae, the cutting of all the blood vessels in the neck and the cutting of the windpipe. Add to that the trauma caused by his head dropping several feet into a wicker basket.

In the introduction to Big Fat Lies, Gaesser claims, "There is a large and ever-growing body of scientific evidence, most of it still confined to professional journals, showing that fat may not be so bad, and in fact thin may not be so good." Yes, just what people with large and ever-growing bodies want to hear. (Interestingly, the authors of the few studies he cites came to the opposite conclusions he did.)

Later in the introduction he says, "This book was written with the hope of discrediting the myths that obesity is a killer disease, that weight loss is good, that thinner is necessarily healthier, and that the height/weight tables measure something meaningful."

But curiously, he later relates a Duke University study of 600 obese men and women who completed a low-calorie, low-fat diet and exercise program lasting at least four weeks. While they still remained obese, they all lost weight. He then notes that their cholesterol levels, their blood pressure and the amount of fat in their bloodstreams all fell. The point? "It is possible to greatly improve or even ’cure’ diabetes and other serious health problems while still remaining markedly overweight" (emphasis his).

Wait a minute. First Gaesser argues that saying "weight loss is good [and] that thinner is necessarily healthier" are myths. "Diet and Die" is one of his chapter titles. Now he’s citing a program of diet and exercise in which weight loss resulted in improved health indicators and says it somehow supports his thesis!

Gaesser also admits that abdominal fat appears to be responsible for "such killers as heart disease, cancer and diabetes." But anyone who’s extremely fat carries a large portion of it in the abdominal area. Charles Van Dyke’s abdominal fat alone probably weighs more than I do. Even those (primarily women) who younger in life carry most excess fat on their hips and thighs (so-called "pears") have plenty to worry about.

First, some studies (such as one in a December issue of the Journal of the American Medical Association) have found that there’s no "safe" place for the body to store extra fat. Further, even pears usually find that after menopause their fat shifts up into the belly area. So by Gaesser’s own definition, at the age at which heart attacks, cancer and diabetes start to become a problem, so does a person’s excess fat.

The evidence is incontrovertible: More fat equals less life. And as Kenneth Cooper put it, "You can’t be fat and enjoy life to the fullest." Throw away your miracle diet books promising something for nothing, and throw away the fatlash books making the same promise. Either Siren song can kill you.