Now Browner’s own Scientific Advisory Panel (SAP) has rejected the EPA’s proposal to declare the nation’s highest-use herbicide, atrazine, a "likely carcinogen." Few papers covered it, and the most prominent, USA Today, got the story backward. It declared: "The most commonly used herbicide in the USA has been upgraded from a ’possible’ to a ’likely’ carcinogen in a draft report prepared by scientists at the Environmental Protection Agency."

Likewise, the environmentalists leading the charge against atrazine have it wrong. The Environmental Working Group (EWG), which last year issued a "study" labeling atrazine a baby killer posted on its web site: "New EPA Study Elevates Cancer Rating for Top U.S. Weed Killer." Actually, the 15-member panel unanimously rejected the Agency’s attempt to elevate atrazine to a "likely" carcinogen. Even by its own anti-scientific standards, this latest EPA attack on a safe and invaluable chemical was particularly egregious. 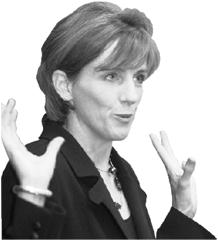 Massive dosing of three types of mice, another type of rat, and Sprague-Dawley males showed they could drink it like Kool-Aid. (And no, not the type the Rev. Jim Jones forced on his disciples.) As the SAP noted, the mechanism which causes tumors in the female of that one rat strain is well understood. It no more applies to humans than something that causes tumors in tails.

"The Sprague-Dawley female (and some strains derived from it) has a specific deficiency in its hormone system causing it to have a high background incidence of mammary tumors," says Darrell Sumner, a toxicologist at Wake Forest University in Winston-Salem, North Carolina. He studied atrazine for over 15 years, much of it while working with Novartis but he returned to academia almost four years ago.

If evidence of atrazine’s harm to humans is thinner than a rat’s whisker, evidence of its benefits is another story.

The chemical is the prime weed-killer for an amazing number of crops, over 30. It’s used on about two-thirds of all U.S. corn and sorghum acreage, and as much as 90% of our sugar cane.

Environmentalists insist there are alternatives. But as with virtually all environmentalist "alternatives," they are far costlier and far less efficient. "If there were other products that were safer and more cost-effective, we’d use them," Jere White, Executive Director of the Kansas Corn Growers Association, told me.

Numerous studies have shown that for corn growers, alternatives would entail a loss of around $35 per acre due to higher costs of treatment and lower yields. "My most conservative estimate is that it would cost Kansas farmers $120 million annually," said White. Further, considering that atrazine is used in about 80 other countries, this could destroy our agriculture industry’s ability to compete internationally. The reduction in U.S. grain output could also threaten people in underdeveloped countries who will starve without our grain.

Despite the EPA’s efforts, the evidence for atrazine’s safety — a chemical used for over 40 years — has actually been mounting.

About six years ago, the EPA called for a special review of atrazine. The response was overwhelming, with over 100 new scientific studies submitted on the safety and benefits of atrazine and its triazine cousins. During that time the EU gave it a clean bill of health and last year WHO’s International Agency for Research on Cancer (IARC) actually said the mammary tumors in Sprague-Dawley females were not relevant to humans — strong words for IARC.

Because atrazine is so widely used, you might expect to find it in drinking water at high levels. Indeed, "Seasonal drinking water contamination could be widespread," an EPA official told USA Today. Wrong.

"Monitoring in all the water supplies in the 21 states with highest use of atrazine, involving over 21,000 water supplies and 88,000 individual samples, shows that 90% have no detectable levels of the herbicide," according to Brian Christensen, an environmental scientist with En-Fate, an environmental consulting firm near Minneapolis. "Only seven of these 21,000 exceeded the EPA’s 3 parts per billion standard — barely,” he told me.

These findings indicate that a 150-pound adult could drink 21,000 gallons of water a day containing the allowable maximum level of atrazine and still have no adverse health effects. That’s a lot of trips to the bathroom.

Further, the detectable levels are dropping. U.S. Geological Survey monitoring of Midwest streams has shown median concentrations of the herbicide have fallen by about a half in recent years.

So what’s really behind the atrazine assault? At the EPA you don’t show off your power and "courage" by clobbering a chemical nobody’s ever heard of or, conversely, something for which there truly is strong evidence of harmfulness.

Forget chemicals that might actually be dangerous, it’s the safe, highly-used ones you pursue. This would have been a tremendous coup for the Gore team in an election year.
Instead, it just left a bad taste in their mouths. And it should in ours.