It seems that when it comes to weight-loss products, the expression "If it sounds too good to be true, it probably is" just doesn’t have meaning. So it has been with the so-called "miracle anti-fat pill," which isn’t a pill, isn’t a miracle, and has "hype" written all over it.

Recent studies in Science magazine have claimed synthesized high doses of a naturally-occurring hormone, called leptin, caused mice to go from Jackie Gleason to Art Carney in a matter of weeks.

This has sparked a celebration in various media outlets. The St. Petersburg (Florida) Times, the most-read newspaper in one of the fattest parts of the country, gushed, "Just think: You could gorge yourself on ice cream, potato chips, tacos . . . . Then just pop a miracle pill, and your worries are over . . . . The world would be couch-potato heaven." Ah . . . Eat, drink, and be merry, for tomorrow there’s a drug, right?

The first little problem with leptin is that the "pill" is actually injections, possibly daily, for life.

No big deal? Ask any insulin-dependent diabetic. The difference between leanness and simple obesity (obesity is usually defined as being 20% over ideal weight) is about the equivalent of a McDonald’s Big Mac. Probably few of us would cherish trading sandwiches for shots.

Then there’s the efficacy issue. Leptin works wonders on rotund rodents and no doubt Mickey will soon have heard the last of Minnie’s teasing about his "beer cheese belly." But mice are not small men. Medical literature is replete with instances of drugs that cured or killed rodents yet had no effect on humans. 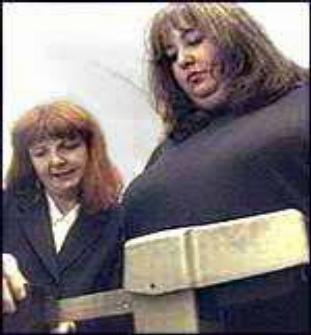 Though studies have repeatedly proved it, you don’t need to do rocket science to know that weighing this much cannot be good for you.

Recent research by Dr. Jose Caro and others at Thomas Jefferson Medical Center in Philadelphia, including a study in the June Journal of Clinical Investigation, has found that obese people actually already have far higher levels of leptin than do lean ones. This could mean that leptin is useless as a weight regulator in humans. Or, as Dr. Caro told me, the situation could be like type II diabetes, in which sufferers have high levels of insulin but are resistant to its effects and therefore must be given much more insulin.

Maybe a massive dose of leptin would work on obese humans, says Dr. Caro. "But that is an optimistic view. It may also not work." Then there’s safety. We don’t know yet how safe large leptin infusions are for mice, much less humans.

What all this means is that the two-year timeline some reporters have suggested for general use of the drug is laughable. Five is more like it, and perhaps far more. Assuming leptin even worked perfectly, there would still be the problem that obesity is often just the most obvious indicator of the physical harm on ourselves by overeating and underexercising. Leptin won’t strengthen the lungs, heart, and other muscles grown soft through too many hours of watching Home Improvement and Roseanne. It won’t lower cholesterol levels. It won’t prevent colon cancer and other malignancies linked to a bad diet.

And then there’s another kind of harm for which obesity is merely a marker, the mental attitude that’s led to the obesity epidemic.

Despite the other obesity hype we’ve been hearing lately, that of "fat genes," genes cannot explain the waistline explosion of the last two decades that has made a third of us obese and perhaps three-fourths of us overweight. Genes cannot explain why Americans of European and Japanese descent weigh so much more than do Europeans and Japanese, making the land of the free also the land of the fattest people on earth.

Yes, there is evidence that some human obesity is genetic, and if a 300 pounder insists he sustains his weight on a turnip a day, I won’t argue. But most fat people are only lying to themselves when they blame their ancestors.

One better object of blame is a culture that encourages overeating and underexertion. Another is ourselves. Our total caloric consumption has increased 20% since the 1950s, even as the boob tube has steadily squeezed out physical recreation.

It used to be that concepts like "self-restraint," "delayed gratification," "self-denial" and "all things in moderation" were indicative of building character. Now they have become quaint.

Tell an overweight American he should eat less and exert himself more and you’re likely to get the same incredulous response you’d get if you told a welfare mother with seven children by six men that human beings should not behave like rabbits.

Gluttony isn’t called one of the seven deadly sins because it can spoil your looks in a bikini, but rather because of its impact on the spirit. But Americans don’t want to hear about that sin or any other.

Instead, we want to indulge, and we don’t want to bulge. So we spend billions of dollars a year chasing after fad diets, false prophets, anti-cellulite salves, pills, foods, drinks, and exercise equipment guaranteed to effortlessly burn off gazillions of calories. We buy books and videos from screaming women with blonde crewcuts, and purchase cream promising to magically drain the fat from our thighs.

Sure, no miracle cure has worked yet, but the next one just might. Anything’s better than a little self-discipline, a little denial. And who knows, maybe the next promised miracle will really pan out. Maybe leptin will.

Yes, some day we may all be able to walk around in a glorious leptin lethargy with feedbags on one end and bags like they sling under parade horses on the other end. But alas, what truly ails this nation no drug is going to cure.