It was a classic example of "pack journalism." In mid-October, five Canadian newspapers ran versions of the same story. They included: "A Sick Little Secret; U.S. Knew of Side Effects of Canadian Army’s Anthrax Vaccine" (Edmonton Sun), "U.S. Admitted Anthrax-Vaccine Problems" (Montreal Gazette) and "U.S. Calls Anthrax Vaccine Unsafe" (Toronto Star). Yet each was false and had been publicly revealed as such in the United States months earlier.

Welcome to "Anthrax Angst Syndrome," mass hysteria over a series of six shots that have been used safely and effectively since 1970 but are now being portrayed as the Devil’s Brew in a syringe. Yet the real evil isn’t the anthrax vaccination; it’s anthrax itself.

Anthrax is one of the deadliest diseases known. The bacterium causing the disease is the "number one agent we need to protect against," according to Dr. Phillip Russell, former commander of the U.S. Army’s Medical Research and Development Command. It’s nearly always fatal, depending on the amount inhaled. Iraq and at least nine other nations have anthrax weapons, according to the Pentagon, and a single Iraqi aircraft equipped with aerosol tanks spraying the germ near the Kuwaiti border could imperil all of Kuwait and much of northern Saudi Arabia in a few hours.

Yet active duty and reserve personnel across North America are refusing orders to receive the shots. In a single day last January, nine A-10 "Warthog" pilots with the Connecticut Air National Guard resigned rather than take the vaccine.

While the U.S. military claims refusals are rare, perhaps 300 at most so far, it has no mechanism to count them. According to a recent article in the Baltimore Sun, internal U.S. military documents indicate half the pilots in some Air Guard squadrons are resigning or seeking non-flying jobs to avoid the vaccine. Some documents described units "struggling" to conduct missions.

Canadian papers are filled with stories lionizing men who volunteered to defend their countries with their lives, but refuse to take an injection, such as the Montreal Gazette’s "Anthrax-Vaccine Holdout Used as a Scapegoat?"

Much of the hysteria is spread over the Internet; and much in the old-fashioned way of ink and paper.

The origin of the "sick little secret" was a June article in the San Diego Union-Tribune. It claimed "The [anthrax] vaccine, according to a memo signed by [Army Secretary Louis] Caldera, ’involves unusually hazardous risks associated with the potential for adverse reactions in some recipients and the possibility that the desired immunological effect will not be obtained by all recipients.’"

The memo was a mere letter of indemnification and the sentence in question began, "The obligation assumed by [vaccine maker] MBPI under this contract involves unusually hazardous risks . . . ."

Thus the reference to risk applied not to vaccine recipients, but to the manufacturer. Pentagon spokespersons took great pains to publicize the truth, yet 12 weeks later the Canadian media recycled the distortion.

NDP health critic Judy Wasylycia-Leis said the memo proved the government is "playing Russian roulette with our soldiers." An attorney representing a Canadian airman who refused to take the vaccination said it showed his client "made the right decision," adding, "It is really frightening that they [the U.S. Army] are acknowledging serious risks."

No, truly frightening is the willingness of these papers to misrepresent what the document said, to use these false and alarming quotes, and to publish no retractions.

But isn’t it ominous that the U.S. military felt it necessary to indemnify the vaccine-maker? Hardly.

Since 1986, under the National Vaccine Injury Compensation Program, the government has indemnified makers of vaccines it recommends be given to children. This includes tetanus, measles, mumps, rubella, measles and others.

Still, you can’t completely blame the regular media. A powerful weapon in the anti-vaccine arsenal is the Internet, where statements of ersatz experts and supposed symptoms are spread by e-mail, news groups, and Web sites that should have as their URLs "www.paranoia.com" and "www.conspiracy.org."

Pentagon spokespersons complain bitterly about the cyberspace horror stories, even as one anthrax agitator has exulted: "The Internet has been crucial in getting ’the rest of the story’ out about the anthrax vaccine."

Thus one Web site provides "THE DETAILED STORY FOR 50 SERVICE MEMBERS AT ONE INSTALLATION ALONE," with a mouse click taking you to "shocking information of health for those at Dover Air Force Base." These 50 alleged cases have between them a symptom list longer than this newspaper’s stock tables.

While nobody reported waking up transformed into a gigantic insect, the stranger symptoms include: "lesions that turned into moles all over the body," "dry ear canals," "grayouts," "tightness in hands and wrists," and "pain in both toes." Both?

Dr. Tom Luna, who supervises the Dover vaccination program, told me that in actuality more than 25 symptoms were reported. That’s in part explainable, he said, by instructions to report absolutely anything any recipient felt might be related to the vaccine. The other part is that the airmen had themselves been exposed to the horror stories.

But what’s most important, Dr. Luna said, is that the only commonality in symptoms was "local reactions such as sore arm, redness, swelling at injection site."

As with Gulf War Syndrome (GWS), to which more than 120 different symptoms have been ascribed, it is the lack of commonality that provides the best evidence that we’re observing not organic illness but rather mass hysteria.

The U.S. Food and Drug Administration (FDA) licensed the anthrax vaccine in 1970, and as of mid-October about 1.2-million doses had been administered. Since late 1990, a U.S. government-sponsored panel has tracked adverse reactions to all U.S.-licensed vaccines, encouraging "ALL reporting of ANY clinically significant adverse event occurring after the administration of ANY vaccine." (Emphasis original). 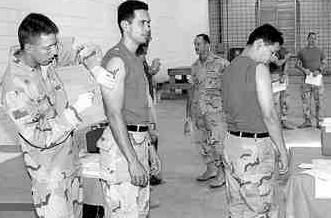 The only commonality reported in reaction to the anthrax vaccine is "sore arm, redness, swelling at injection site."

Despite such a wide definition of "adverse event," only 362 were reported. Most came after the negative publicity began. Of those, 17 recipients were hospitalized, though only five cases were attributed to the vaccine and all of these were allergic reactions.

"We are confident that the anthrax vaccine is safe and effective," says FDA spokeswoman Kathryn Zoon.

If the anthrax angst sounds awfully similar to that over GWS, it should. Certainly the cast of characters strongly overlaps.

For example, member of the U.S. House of Representatives Chris Shays held 14 hearings on GWS, inviting only vets with the wildest stories to testify, such as the one who claimed to spew glowing vomit during physical training five days a week for 10 straight months.

Rep. Shays has done likewise with five hearings on anthrax vaccinations, again inviting "experts," whose only speciality seems to be making outlandish statements before Congress or to reporters looking for two sides to a story even if there’s clearly only one.

Both Canada and the U.S. have already been far too craven in placating GWS activists. Should we give in to the anthrax vaccine hysteria, setting the precedent for servicemen to opt out of anything for any reason? Sure, if we want fighting forces as formidable as the Boy Scouts.