Brace yourself. The new annual report on AIDS is out and the news is horrifying. Horrifying, that is, if you’ve been riding the AIDS gravy train or have made your reputation with cries of gloom and doom.

But for those who think the fewer who get this horrible disease the better, the news is wonderful. As the figures from the Centers for Disease Control and Prevention attest, the bottom is truly falling out of the epidemic.

So much for Health and Human Services Secretary Donna Shalala’s congressional testimony six years ago that without massive federal AIDS intervention, "There may be no one left."

What of everybody’s biggest AIDS obsession, non-drug abusing heterosexuals? As a percentage of the whole, they remained at 14%. But since all cases fell by about a fifth, then so did heterosexual cases. The approximately 6,700 heterosexual AIDS cases reported last year equals about 15% of those who died in motor vehicle accidents.

So much for Oprah Winfrey’s insistence in 1987 that a fifth of heterosexuals would be dead of AIDS by 1990 or for what then-Surgeon General C. Everett Koop once called "the heterosexual AIDS explosion."

What of the second-biggest obsession, teenagers?

"The epidemic is spreading most rapidly today . . . among heterosexuals, among teens and young adults, and in areas outside the big cities." — Health and Human Services Secretary Louis Sullivan, 1992 Wrong, wrong, wrong, and wrong. But besides that . . .

So much for headlines like "Devastating’ Spread of AIDS among U.S. Teenagers," "AIDS Runs Wild Among Teenagers," and then-Rep. Pat Schroeder’s 1992 assertion that AIDS is "spreading unchecked" among teens "and threatening the loss of another generation."

AIDS cases among women were supposed to soon overtake those of men. Indeed, they did comprise 23% of all cases reported last year, a "jump" from 22% the year before. But in sheer numbers women’s cases fell from over 13,000 to less than 11,000.

So much for then-Surgeon General Antonia Novello’s claim in 1993 that, "Women are bearing the brunt of the infection," and USA Today’s bizarre 1991 assertion that "Women are 12 times more likely to get AIDS."

So much for the claims in the early 1990’s of then-chairman of the National Council on AIDS, Dr. June Osborn, that "Many rural parts of America are about to be blind-sided by the epidemic," and AIDS "is rapidly spreading throughout smaller and smaller communities each year."

We were also told, oh, about a million times, that AIDS soon could no longer be identified with homosexuality. Yet, while sexually active male homosexuals comprise perhaps 2% of the population, both for 1997 and 1998, they made up 45% of AIDS cases. Add in homosexuals who also inject drugs (and hence could have contracted the disease either way), and it was 50% for both years.

Meanwhile, in percentage terms at least, the ignored groups blacks and Hispanics continue to bear an ever-greater share of the AIDS burden.

For whites, only 10 per 100,000 were reported with AIDS last year. For Asians, the rate was half that. But Hispanics had almost four times the white rate while blacks in 1998 had an amazing rate of 85 AIDS cases per 100,000 persons.

Of babies reported with AIDS last year, only 58 were white and one was Asian. Meanwhile, 237 of the babies were black and 84 Hispanic.

All of this rather puts the kibosh on all those touchy-feely, warm and fuzzy, politically correct statements such as the American Foundation for AIDS Research (AmFAR) slogan, "AIDS is an Equal Opportunity Destroyer," or USA Today’s "AIDS remains a non-discriminating killer." 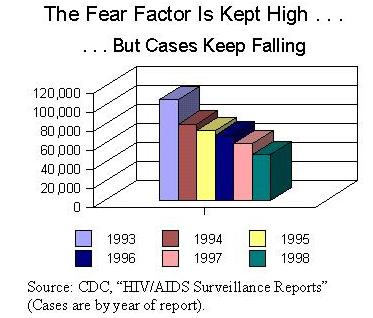 AIDS has been destroying and killing in a most discriminating manner for two decades now, and isn’t about to stop.

As for the riders of that gravy train the bureaucrats who were going to save the nation, the educators who only miseducated, the media, the feel-good groups like AmFAR, the researchers who lied before Congress in hopes of pumping up their budgets — they’re pretty much laying low now. No mea culpas are forthcoming. None will be.

Indeed, when I recently debated a Seattle public health official prominent in the AIDS field, he made the tired old claim that "heterosexuals are the fastest-growing portion of the epidemic." When I asked how with the epidemic shrinking any group could be considered "the fastest growing," he immediately backed down.

Homosexual activists are now admitting they literally conspired to exaggerate the threat to non-homosexuals, but expect no such forthrightness from the media or the nation’s health officials.

All of these people richly deserve having their feet held to the fire for misleading us so greatly and for so long, making us concentrate our resources on where the epidemic wasn’t and thereby taking away precious time, energy, and money from where the horrible blow was really falling.

But don’t hold your breath. 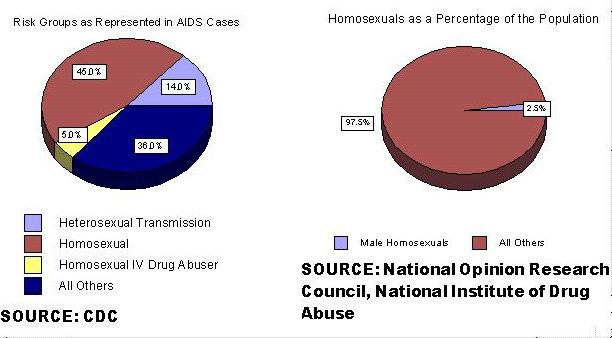