For all the news lately about the threat that airbags pose to children, you’d think it’s the Slaughter of the Innocents all over again. You’d believe you could look out your window at any time and see an airbag chasing some poor little boy or girl down the street. 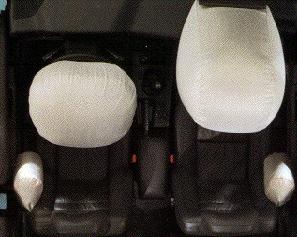 But no, such is not the case. The scariest thing about this whole airbag thing is not the threat to children but that the media has taken its cue from USA Today, the paper that prides itself on promoting hysteria.

It was USA Today that led the coverage of the missing children epidemic in the early 1980s, telling us, "estimates of lost children [per year] run as high as 2 million," and asking "how could it happen?" It also said, "More than 100,000 children are abducted each year."

How could it happen? It couldn’t and didn’t. The newspaper was later forced to admit that the two million figure was probably about 30,000, of which (according to the FBI) only 67 were kidnapped. Oops.

More recently, it was the first newspaper to inform us of an "epidemic" of black churches being torched by racists. After six months of incendiary reporting it finally admitted that of over 70 black church burnings it looked at, only three were clearly done by racists and a third of the churches were burned by blacks. Oops.

No matter, there’s always a new hysteria to be created. And so it was that USA Today crack reporters in May kicked off the airbag mania with an article running under the inch-high headline, "DEADLY AIR BAGS." An accompanying story was titled, "Why Air Bags Are Killing Children." If your trembling hand turned to the next page you found "Deadly Force: Air Bags Are Claiming the Lives of Children," while yet another page blared, "Prescription for Safety Turns Deadly."

The rest of the media then followed USA Today, which is about as wise as letting Stevie Wonder pilot your plane. Suddenly it’s worthy of a headline when a child is so much as injured by an airbag.

It’s gotten to the point where volunteers at busy freeway rest areas spent their Thanksgiving handing out fliers warning parents of the danger of these pneumatic beasts. (USA Today proudly displayed a story on this on page one.)

I’ve always been a big seat belt fan, myself. They’ve saved my rear (and the rest of me) twice. But it’s clear that even if you do wear a seat belt and especially if you don’t, airbags are far more likely to save you than to kill you.

Department of Transportation (DOT) figures show that since 1987, airbags have probably kept 1,136 people from being crushed to death, with the life-saving rate accelerating rapidly as more and more cars are equipped with them. In 1995 alone, airbags prevented 462 deaths.

The trade-off? Since 1990, DOT says, they have caused 52 deaths, including those of 32 children. You needn’t dig out that misplaced pocket calculator to see that this comes out to a net savings of a lot of lives.

As to those 32 children, in a real sense that is 32 too many. But other than being mauled by a Siberian tiger in New York City, there is practically nothing less likely to kill your child than an airbag. Indeed, according to the National Safety Council in Chicago, during the time those 32 children were killed by airbags, over 15,000 children age 11 or under were killed in car accidents for reasons having nothing to do with the devices.

But hard facts like these are the first casualty of panics. And so, reacting to the hysteria, DOT has decided to relax the law making it illegal for a mechanic to disconnect a vehicle owner’s airbag. The utterly unavoidable result is that people will die in crashes whose lives would otherwise have been saved by the devices.

And for what? As tiny as your child’s risk of being killed or injured by an airbag currently is, you can reduce it even further by simply by sliding the passenger seat all the way back, and by making sure your child is wearing a seat belt. Last year, over half the children killed by airbags were not wearing seat belts. The one-year-old girl who just died from an airbag was, according to the coroner, not properly restrained.

To reduce your child’s near-zero risk from airbags to absolutely zero, just put him or her in the back seat.

Unfortunately, panicky people don’t think about such things. So it’s off to the auto shop to have both the passenger and driver side bags disconnected.

The first time a person is impaled on a steering wheel or squished by a dashboard because of a disconnected airbag, I hope we read about that in the papers. But don’t expect to hear about it from USA Today.