In response to recent food scares, the European Commission on Wednesday proposed the creation of an advisory board of scientists to advise the European Union on food safety. Such a panel could help bridge the gap between American acceptance of, and European distrust — even terror — of, biotech foods.

Europeans call biotech foods "Frankenfood" or "mutant." Even their "neutral" term "genetically modified" has an ominous ring. And Europeans are listening. According to a poll conducted by the European Commission, Europeans are more likely than Americans "to view agricultural biotech as a threat . . . to the moral order, and more likely to associate [biotech] foods with menacing images of adulteration, infection and monsters."

There’s no short answer. The undercurrent of the controversy is the clash between American and European attitudes toward food in general. "Food is our culture," one Frenchman told me — and that culture is a conservative one. That biotech food is different in any way from its predecessors is, for many Europeans, a strike against it, even if the difference has no effect on health or taste.

Biotech food to an American.

Biotech food to many Europeans.

The fact is, virtually everything we eat has been "genetically modified" by the hand of man through selective breeding, beginning thousands of years ago. What’s new is the ability to select and transfer specific genes or sets of genes more precisely. Yet this newness allows Europe’s heavily subsidized farmers to exploit fears that biotech food may pose some as-yet-undefined health risk.

And that’s the real story here: The campaign of fear-mongering against the biotech industry in Europe is a sop to special interest groups, particularly environmentalist and heavily subsidized EU farmers.

Virtually all biotech seed currently sold has one ultimate purpose: allowing farmers to grow more food on less land at less cost. But the potential for that kind of efficiency and productivity threatens the status quo for European farmers, who are about twice as heavily subsidized as their American counterparts. "Farmers here are embracing organic techniques precisely because they produce far lower yields," says Roger Bate of London’s Institute for Economic Affairs. "The last thing they want is to be more productive." That would drive prices down.

Partly because these subsidies encourage unproductive techniques, many European farmers have long failed to compete with Americans. The increased efficiency of U.S. biotech crops promises to widen the disparity. So for the farmers and their governments, these crops are a threat. The EU has obediently declared a moratorium on approval of new biotech crops.

Because the U.S. is the primary or sole exporter of some of these crops, the moratorium is arguably a trade restriction. We’ve seen this tactic before, with the EU’s effort to block the import of cheaper U.S. beef. Europe’s scare tactics over growth hormones were laughed out of the World Trade Organization, but the EU still refuses to lift the ban.

European environmental groups, especially Greenpeace, have also played the health card to get their way. These groups have far more influence in Europe than in the U.S. As EU regulators have lost credibility from fumbles with mad cow disease and Belgium’s dioxin-fed chickens, environmentalists have achieved "a very high level of credibility," says Walter von Wartburg, author of Gene Technology and Social Acceptance. "We have a regulatory process with lots of directorates coming up with different opinions. And if some are for and some are against and Greenpeace says this is the ultimate truth, they become a kind of arbiter." 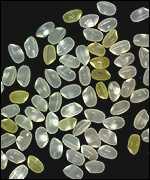 Opponents of biotech food shrewdly exploit anti-American sentiment. "Most Europeans think of the U.S. as a colonial power, albeit a very soft and gentle one," says Gian Reto-Plattner, a scientist and a Socialist member of the Swiss Parliament who broke with his party to oppose a ban on sales of biotech food. Americans are also partly to blame for assuming a European willingness to dive into the future as quickly as we do.

Old World sensibilities are different, after all.

Yet even if Europe banishes biotech, it wouldn’t be the end of the world. Says Carole Brookins, a Washington agriculture consultant: "We need to remember there’s almost six billion people outside of Europe and start concentrating more on them."