No sooner had the rioting in Los Angeles ended than the blame-laying began.

It seems that the only factors not cited as leading to the violence that caused more than $785 million in damage and as many as 45 deaths have been UFOs and fluoridated water. 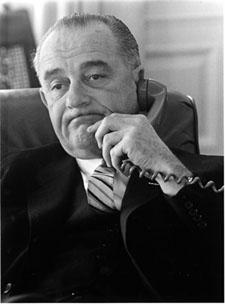 LBJ: A loser both in Vietnam and in the ”War on Poverty”

Much of the blame for the riots in Los Angeles and the troubles in other U.S. cities so far has swirled around the welfare programs that were part of President Lyndon Johnson’s "Great Society" — and not without reason. A major impetus for those programs, known widely as the War on Poverty, was Los Angeles’ disastrous Watts riot in 1965.

One side, argued forcefully by Bush administration spokesman Marlin Fitzwater, blames the Great Society programs for ignoring "the relationship between people’s pride in their community and having a job."

President Bush himself has noted that the welfare system, though intended as a "compassionate safety net," consumed $3 trillion in 25 years and trapped many in an endless cycle of poverty that does not reward individual initiative.

The other side argues either that the programs were never given a chance or that in fact they actually did work.

Some may say, "Who cares? Let’s stop laying blame and start implementing solutions." Yet, if government is to be part of the solution, some wonder if it isn’t necessary to first ask if it hasn’t been part of the problem.

A sober analysis of that question is complicated by prevailing misconceptions about LBJ’s War on Poverty. One of the abiding myths of the 1980s is that the Great Society programs were dismantled by a succession of Republican presidents, culminating with Ronald Reagan.

The Rev. Jesse Jackson has said that, "Except for the major programs in education and health care that were launched in the 1960s, which President George Bush claims to support, most of the original Great Society programs were gutted long ago."

Kenneth R. Walker, former White House reporter for ABC News, now a columnist, takes the side that the Great Society was never given a chance.

"His (Johnson’s) Great Society was strangled by the financial and political demands of the Vietnam War," Walker wrote recently. "When Richard Nixon was in his second term, the programs had virtually ceased to exist."

In fact, almost all of the Great Society programs are alive and well. The only program Reagan killed was the Comprehensive Employment and Training Act, which was regarded by liberals and conservatives alike as a failure.

Of the programs that remain, one is singled out for blame when it comes to the disintegrating inner cities: Welfare, which has earned the special wrath of those who blast the Johnson administration for starting the long trend toward welfare dependency among the poor.

Yet, even there, the program most severely criticized, Aid to Families with Dependent Children (AFDC), didn’t begin under Johnson.

It started under President Franklin D. Roosevelt’s "New Deal" in the 1930s, which authorized the program to make payment to widows with children. Since then, AFDC has been expanded to cover all unmarried parents with children.

Numerous critics — ranging from Charles Murray, author of "Losing Ground," on the right, to Mickey Kaus, author of the upcoming The End Of Equality, on the left — have documented how such payments discourage pregnant women from getting married or encourage women with children to get divorced.

"In 1960, it (welfare) was so meager that only a small set of young women at the very bottom layer of society could think it was ’enough’ to enable a woman to keep a baby without a husband," writes Murray in the July issue of Commentary.

"By 1970, it was ’enough,’ both in the resources it provided and in the easier terms under which it could be obtained, to enable a broad stratum of low-income women to keep a baby without a husband," he adds. "That remains true today."

These need to come equipped with two parents, not one.

"Without AFDC," said Kaus, "the culture of single motherhood could not sustain itself."

But, says Kaus, an editor at New Republic magazine, "Johnson hated welfare ... Most of the explosion occurred on (Nixon’s) watch."

In constant 1980 dollars, the federal government spent $66.2 billion on public aid from 1965 to 1969, more than double the amount spent in the previous five years under the Eisenhower and Kennedy budgets. But in the next five years, under Nixon, public aid spending increased another $80 billion.

Federal contributions to Aid to Families with Dependent Children decreased only 1% in constant dollars from 1981 to 1989, even though 1981 was a recession year when need was considerably greater. Total federal cash assistance to the needy increased 3% in constant dollars.

That program was in fact part of Johnson’s Great Society legacy, beginning in 1965. During Johnson’s term, it ballooned from 424,000 participants to 2.2 million, according to the Department of Agriculture. But food stamp participation exploded during the Nixon years, quintupling by the end or his first term.

By 1980, 21.1 million persons took part in the program. The number dipped slightly during the Reagan boom years, but rose again during the recent recession to an estimated 24.8 million.

Welfare critics point to a steady decline in family unity since the explosion of the mid-’60s. It’s no coincidence the two are happening at the same time, they say.

According to the Census Bureau, a single-parent family is six times more likely to be poor — and thus a recipient of welfare — than a two-parent family. Women heading families are particularly vulnerable.

Blacks have been especially hard hit.

At the beginning of World War II, the illegitimate birth rate among black Americans was slightly less than 19%. Between 1955 and 1965 — the year of the Watts riots and also the start of the War on Poverty — it rose slowly, from 22% to 28%.

Empirical studies have borne out the theory that welfare is behind much of this disintegration.

For example, a study at the University of Washington showed that an increase of roughly $200 a month in welfare benefits per family correlated with a 150% increase in the illegitimate birth rate among teens.

The Green Book took its data from the Congressional Budget Office and the Office of Family Assistance of the Family Support Administration.

The concept of welfare dependency was also bolstered recently by a study by David Elwood of Harvard University. He found that of the 3.8 million families currently on AFDC, well over half will remain dependent for more than 10 years, many others for 15 years or longer.

Studies also show a correlation between crime and broken homes. It isn’t so much the crime committed by the members of the broken home itself, says Robert Sampson, a sociologist at the University of Chicago, as it is the impact of broken homes on the community.

"A high threshold of single-parent families in a community means a low capacity for social control of kids," he said. A child is "more likely to find peers in that community who are not supervised."

Sampson said the relationship between broken homes and crimes "is large and certainly larger than many of the other factors that I looked at in the analysis."

Jim Maddox of the Washington, D.C.-based Family Research Council, said men who come from such families don’t "have any role models for what a responsible, good family man is. Masculinity then is defined by gangs rather than good family men in the community."

But is it fair to blame the breakup of the black family entirely on welfare, Great Society or other?

Long before the Johnson administration, blacks had high rates of illegitimate birth and single-parent families. But illegitimacy began rising sharply in the 1960s.

Indeed, it was this steadily rising rate, along with a comparable rise in black single-parent households, that led to the publication of Daniel Patrick Moynihan’s controversial 1965 report on the travails of the black family in America.

Dinesh D’Souza, a scholar at the American Enterprise Institute, says that while minorities raise the cry of victimization too often, "There is something to the argument that there have been structures of segregation that have had a strong cultural impact (on blacks)."

But whatever the problems that blacks have suffered in the last half of the century, D’Souza said, "There’s no doubt that it’s become incomparably worse and the question is, ’What else (besides the welfare explosion) could have done it?’"

Sampson contends, however, that welfare is not as important a factor as a lot of people think it is. . . (Illegitimacy) rates have always been higher among blacks than whites."

The problem is "probably more rooted in the marginalization of black families," Sampson said. "The availability of men has always been lower in black communities than white ones," for a variety of reasons, including higher rates of murder and heart disease.

Sampson’s University of Chicago colleague, William Julius Wilson, author of The Truly Disadvantaged, is the major proponent of the theory that male joblessness breaks up families. 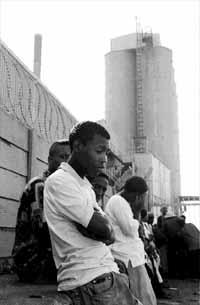 "The troubling reality," Murray writes, "is that a large proportion of young black males of prime working age are not even available for work."

Murray told Investor’s Business Daily that there is a connection between young black male unemployment and single-parent households.

But it’s not joblessness that’s causing the breakup. Rather, he says, the loss of families to the pull of welfare has led to a marginalization of the men who had headed those families.

Compare black male unemployment increases to what was happening in the rest of the country at the time, he says. In 1960, Murray notes, black youth unemployment was only 6.7 percentage points above that for whites. But by 1980 it was 15.4 points higher.

"Black older workers did just fine. It was the young and ablest workers who lost out and the question is, why?"

Kaus advocates starting anew. He would junk welfare, including AFDC, housing subsidies and food stamps, and replace it with a guaranteed government job for every able-bodied citizen over 18.

"I don’t talk about causes," said Kaus. "The point is what are we going to do about the problem (now)?"